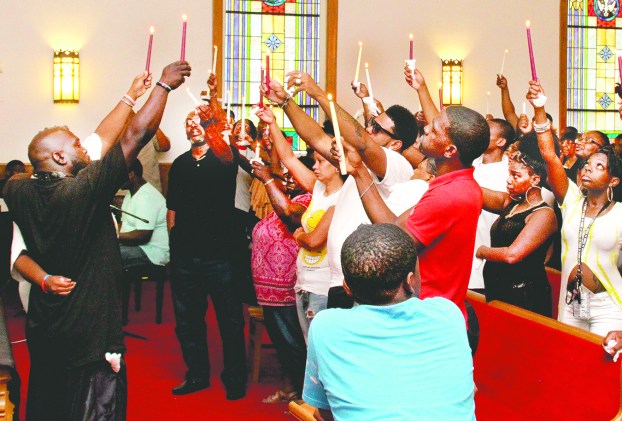 Led by Raymond and Wanda Lee (left), parents of the late Lakiesha Sutton, those gathered inside New Ahoskie Baptist Church on Friday evening lift their candles in memory of Sutton who was murdered at her workplace on Aug. 3. | File Photo by Cal Bryant

AHOSKIE – Beating back sweltering heat that felt like 106 degrees, a group of 200 marched 14 city blocks here late in the afternoon of Aug. 12. Some carried signs reading “Stop the Violence” and Let Me Live.”

Sutton, the 23-year-old mother of a three-year-old son, was buried Aug. 13 following a service held in the gym of Hertford County High School. Her killer, Shakur Deandre Stephenson, age 22, of Murfreesboro, was arrested Aug. 11 by the Henrico County Police Department in Richmond, VA. He was transported back to Hertford County where he faces one felony count of first-degree murder and five counts of felony attempted first degree murder arrest warrants for Stephenson. The attempted murder charges include two male victims that suffered gunshot wounds, and three other males who were in the convenience store’s parking lot at the time of the shooting on Aug. 3.

“We’re here to let the Holy Ghost take charge,” said the Rev. C. David Stackhouse, pastor of New Ahoskie Baptist and the organizer of the march and candlelight vigil. “We’re here to give strength to this family.”

JACKSON – Northampton County’s Board of County Commissioners and Board of Education conducted a public forum here in early January... read more