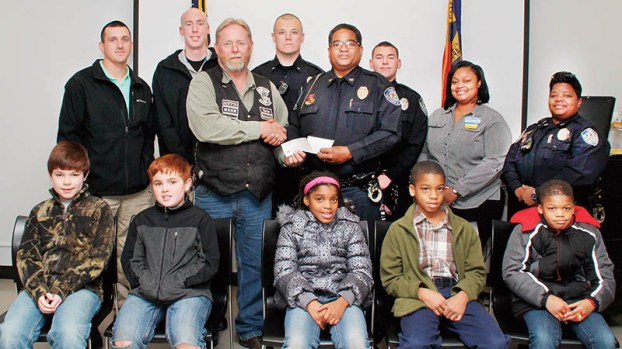 With local children looking forward to Santa’s arrival, Ahoskie Police Chief Troy Fitzhugh accepts a $1,700 check from Zane Roberts of the Locked and Loaded Chapter of the Iron Order Motorcycle Club that will be used to purchase gifts for needy families in the county. The children are, from left, Adam and Clark Mobley, and Alexis, Joshua and Aaron Mabine. Standing from left are APD officers Tyler Burden, Clay Eure, Chris Westbrook and William Deanes along with Ahoskie Wal Mart Super Center Manager Keneshia Roddick and APD Captain Michele Garrett. | Staff Photo by Cal Bryant

AHOSKIE – What do members of a motorcycle club and law enforcement officers share in common?

When it comes to Christmas and kids, both lifestyles have a heart as big as the ocean.

On the day before Christmas Eve, members of the Ahoskie Police Department will use a hefty donation from the local Locked and Loaded Chapter of the Iron Order Motorcycle Club to purchase gifts for the children of needy families in Hertford County.

According to Ahoskie Police Chief Troy Fitzhugh and Locked and Loaded Chapter Business Manager Zane Roberts, the $1,700 donated by the club members will make Christmas bright for nearly 20 families.

Roberts said the funds donated by the chapter to purchase these gifts came from fundraisers they conducted during Ahoskie Heritage Day held in September of this year. The chapter is also using a portion of those proceeds to make a cash donation to the Ahoskie Public Library.

“When we hold a fundraising event, we donate all of it, minus our expenses, to worthwhile projects here in our community,” explained Roberts.

“This is what it’s all about….helping those in need, especially families with children at Christmas,” noted Fitzhugh. “When Mr. Roberts approached me with the idea along with their commitment to fund this project, it really touched my heart.”

Fitzhugh added that by allowing his department to be the “face” of this project, it was a win-win situation for all involved.

“First and foremost, it’s about making sure each and every child here in our county can wake up on Christmas morning with smiles on their faces, knowing that Santa has stopped by their homes,” Fitzhugh stressed. “But it also helps with the public perception of police officers. We all know from seeing the news from across our nation about the mindset that the public has about law enforcement.

“Mr. Roberts wanted us to know his organization and others respect our work and he wanted the citizens to know that as well, and this project helps with that,” Fitzhugh added. “We have good officers here and all over our county.”

The Police Chief added this wasn’t the first time he and his staff have played the role of “Santa.”

“There have been cases where someone has broken into one of our homes here in town right before Christmas and stole all of that family’s gifts,” he recalled. “Other than just investigating those cases, we decided to do more as my staff reached inside their pockets and we came up with enough money to make sure those crime victims enjoyed Christmas. We didn’t publicize that.”

Roberts understands the empty feeling that underprivileged families have at this special time of the year.

“They want so badly to do what’s right for their family, especially their children, but they just can’t make it happen due to their financial situation,” Roberts said. “That what makes this so special because this is the season where giving is much more important than receiving. I’m blessed with a job; my club members are blessed with jobs. We pay that forward by helping those less fortunate.

“You don’t never know when you might need some help,” Roberts continued. “Life may be great one day, and then you wake up the next morning to find out you’ve lost everything you once had.”

Meanwhile, the Locked and Loaded Chapter and another Iron Order Motorcycle Club affiliate joined forces this past weekend to deliver Christmas gifts to residents of a retirement home in the region.

“Motorcycle clubs from all over always have a big heart; there are projects such as this going on throughout the year and most all of them are out of the public’s eye,” Roberts said.

Fitzhugh said a game plan is ready to be executed at the Ahoskie Wal Mart Super Center. There, Fitzhugh and a couple of his officers, all armed with the items on a gift list as supplied by Hertford County DSS, will shop for the items.

“They’re ready for us to arrive there on Friday to shop,” he said. “Wal Mart is setting up two shopping aisles just for us so we will not interfere with the other customers. Plus, the store manager, Keneshia Roddick, told me she will dedicate a few of her employees to help us. We really appreciate what they are planning to do for us.”

Hertford County DSS will collect the toys purchased by the APD and distribute those items to the needy families included on their list.

Songs of the Season

AHOSKIE – The harmony is as diverse as the people behind the music. Ditto for the personal lives – spiritually... read more