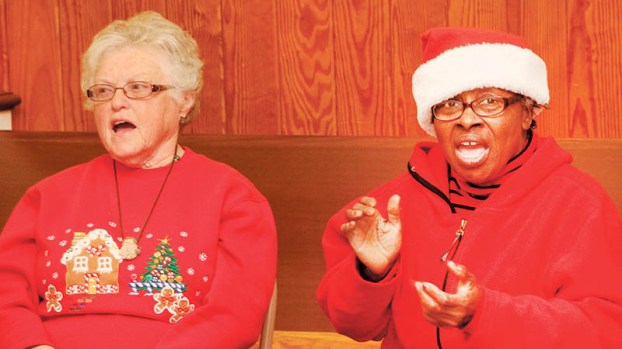 Carolyn Hill (left) joins Shirley Ward in song as the two were part of a practice session conducted late last week by members of the Ahoskie Community Choir. | Staff Photo by Cal Bryant

Songs of the Season

AHOSKIE – The harmony is as diverse as the people behind the music. Ditto for the personal lives – spiritually and socially – of the voices heard on a new CD released just in time for Christmas.

The CD is available locally and soon will be ready to purchase and download from iTunes and Amazon.

“With no instrumentation and no gimmicks or bells and whistles, each song must stand on its own, supported only by simple human voices singing in harmony,” said Richard Goodman who serves the Ahoskie Community Choir as its Director. 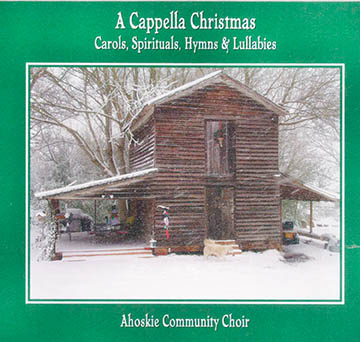 “The songs are not flashy,” Goodman added. “You’re not going to hear versions like these over the speakers at the mall. But what you will hear in every song on this recording is something that can only be called the essential spirit of Christmas.”

The songs range from the Christmas favorites ‘Down By the Riverside’ and ‘Go, Tell It On the Mountain’ to rare, compelling spirituals like ‘Jehovah, Hallelujah!’, ‘Early On One Christmas Morn’ and ‘Ain’t That a-Rockin’.

“What all the selections have in common,” says Goodman, “is that they are beautiful songs, beautifully sung by a group of local folks who are having a great time singing together, and it shows.”

On a recent night in the Fellowship Hall at Ahoskie’s First Presbyterian Church, the Choir – as part of their monthly Potluck Community Dinner (which is open to the public) – practiced for a couple of upcoming performances at other local churches. When they joined in harmony for the old-time holiday spiritual “Silent Night” it came out a little flat. One of the choir members pointed out that fact and asked the group to give it another try, this time with more heart and soul. A second, then a third, version followed….both of which pleased the original critic.

“We’re in this together and we want it to sound that way – together,” Goodman said at that practice session.

The CD artwork continues with a local theme. Photos were chosen from those submitted to the Roanoke-Chowan News-Herald of the big snow that occurred the day after Christmas 2011. The cover photo, taken by Eddie Hoggard, shows a snow-covered tobacco barn. Upon opening the disc cover, there is Doug Brinkley clearing snow on a 1953 Ford Jubilee tractor in a photo snapped by Susan Brinkley.

Goodman says that on their next project the group is eager to include some atheists, especially ones who can sing bass.

“Even though we’re singing about Jesus, Christianity’s central figure and a very important prophet in Islam, people of all faiths and people of no faith will enjoy listening and singing along to these songs,” he said. “Good music is for everybody, and this is the season of good will to all.”

The CD was funded by First Presbyterian Church of Ahoskie and the Presbytery of New Hope. Since all the costs of the project were covered up front, all proceeds from the sale of the CD will directly benefit the Ahoskie Food Pantry, a registered 501c3 organization.

For more information or to order a copy, call Ahoskie First Presbyterian Church at 252-332-2145 or stop by the Ahoskie Food Pantry (located at the church) between the hours of 9 a.m. and 12 noon, Monday through Friday.

The CD can also be purchased by mail from the Ahoskie Food Pantry, P.O. Box 159, Ahoskie, NC 27910. (Please include $5 for shipping and handling for one to five copies.)

COFIELD – Navigation was tight earlier this month along the main hallway of the Rolling & Finishing office on the... read more