Sounds of the season

AHOSKIE – Students, faculty and members of the public gathered together here the evening of Thursday, Dec. 2 at Roanoke Chowan Community College (RCCC) to kick off the Christmas season with the college’s first-ever Holiday Jazz Concert. 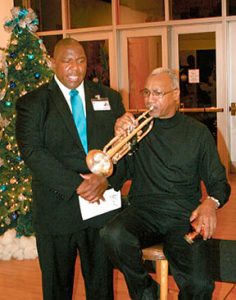 The Jazz Revolution Band, based out of Charlotte, was the featured musical act for the concert, and local saxophonist Henry Britt of Ahoskie performed as the opening artist.

A portion of sales for the $20-a-head tickets to the concert went to the college, with close to 150 people attending the event. About $500 profit was made for the college after event expenses were covered.

The concert was preceded by a silent auction as well as an art show put on by the college’s art department students.  The silent auction raised over $700 for the college, according to RCCC’s Special Assistant to the President, Monique Mitchell.

“We definitely want to do this every holiday season; it was a wonderful event that engaged the campus community and the local community. This is something that we hope to continue to do every year and that it will continue to grow and gain more support,” Mitchell stated.

Jimmy Tate was appointed as the new President for RCCC over the summer, and in addition to planning events such as the holiday concert, he immediately began making changes to school and administrative policies, resulting among other things in enrollment to be up nearly 29 percent since August.

“Since August, our enrollment has increased from 644 then to 905 now,” Tate remarked recently.

He added, “We have been out in the community and engaging prospective students to see what their needs are.”

Tate further said that the college had started to offer more continuing education programs such as EMT-Basic, CNA I and II, as well as a two-semester dietary management class.

The college has also increased availability for their night and weekend classes, as well as more online and accelerated courses. 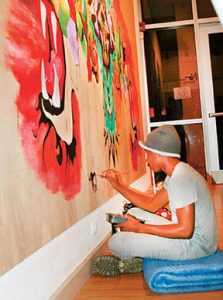 Second year RCCC Art student Brandon Sessoms of Ahoskie adds to a colorful mural on a hallway at the local community college.

“We have weighed the population of Hertford and other (surrounding) counties and taken that into account with the courses we have to offer and when they are. With a lot of the population being working adults, we have started to accommodate for that,” Tate said.

RCCC, based outside of Ahoskie in the Union area, is housed on over 41 acres and has seven buildings on its campus. Traditionally, the school has targeted residents of Bertie, Hertford and Northampton counties, but accepts any eligible adult resident of North Carolina.

JACKSON – The North Carolina State Bureau of Investigation have charged a Northampton County mother with the murder of her... read more