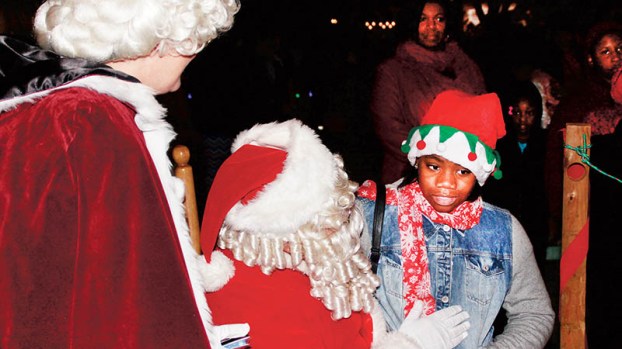 AHOSKIE – There were plenty of hearts, preparing them some room.

More than a hundred people braved the chilly night air here Saturday night at No Man’s Land Park on Main for the official lighting of the Ahoskie Christmas Tree and the arrival of Mr. & Mrs. Santa Claus.

Ahoskie Mayor Jimmie Rowe was on hand to officiate the annual ceremony, held late Saturday evening, that heralds arrival of the Christmas season in the town.

After welcoming Town Council members and other officials, invocation for the evening was rendered by Pastor Rev. Richard Goodman of the Ahoskie Presbyterian Church, who asked God’s blessing on the evening, and for the entire holiday season. 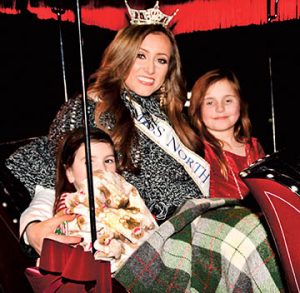 Rowe then nited a special treat two years running: Miss North Carolina was on hand in Ahoskie for the lighting event.

A year ago, Miss North Carolina 2015, Kate Peacock of Dunn, graced the crowd with her presence.

This year, Miss North Carolina 2016 – McKenzie Faggart of Concord – the former Miss Mecklenburg County – was on hand as a greeter, arriving at the proceedings in a horse and carriage along with ‘special’ escorts Claire and Alice Braswell.

Dressed in wool coat and mittens, Faggart, who is a student at UNC-Charlotte, thanked the audience for welcoming her “so warmly” on her first visit to the Roanoke-Chowan area. She encouraged attendees to come up for a photo shoot.

Brandishing a ‘Million Mega-watt” smile that absolutely warmed the hearts of many in the cold of the evening, Faggart said she had enjoyed her first visit to Ahoskie.

“I’m so honored to be a part of this tradition,” the queen said. “I’ve spent a really busy day touring your town, visiting some of your businesses, and I’m so glad to share this Christmas moment with you.”

Faggart also announced she will be returning to Ahoskie on Dec. 10 as the Grand Marshall for the town’s annual Christmas parade.

Following Miss NC were three musical groups that performed, beginning with the Soul Saving Station Choir who not only sang, but also invited the audience to chime in with some holiday caroling.

The next singing group was the Ahoskie Community Choir, under the direction of Rev. Goodman.  The choir is made up of singers from several Ahoskie-area churches, bonded together in song. The pastor even invited the Soul Saving Station singers to join in, making a multitude of voices singing praise for the season.

The final vocal group to perform were the Recreation Department Afterschool Singers, a group of some half-dozen pre-teen and teenaged youths arrayed in elfin caps, who belted out a mean rendition of ‘Jingle Bells’.

The musical serenade gave way to the official lighting of the Christmas tree, a tall stately artificial Douglas fir that will adorn the town square for the holiday season.  Little Annabel Rogers – daughter of town Public Works Director Kirk Rogers – then flipped the switch that colorfully illuminated the night.

Shortly thereafter, what should appear on the horizon but an Ahoskie fire truck in the distance on Main Street, lights flashing and horn blaring.  It was the unofficial ‘sleigh’ bringing Santa and Mrs. Claus to No Man’s Land to visit with the many children gathered and waiting in anxious anticipation for their much expected arrival.

As Mrs. Claus dispensed peppermint candy canes, Santa was making his list and checking it twice as he took requests from youngsters perched on his knee; both ‘the naughty and the nice’ ones who can’t wait for Dec. 25.