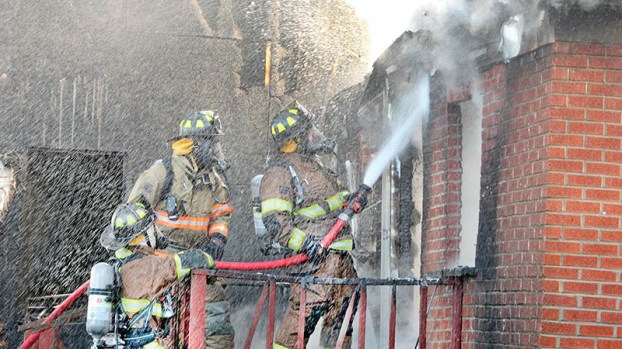 A total of 29 firefighters and eight units battled a residential fire in windy conditions on Sunday afternoon at 218 Vann Road, located off the Ahoskie-Cofield Road. The home was a total loss. No one was injured. | Staff Photos by Cal Bryant

AHOSKIE – A local family is “thankful” to have their lives after watching their home go up in flames near here Sunday afternoon.

It appears that a pan of hot grease, left unattended, is the cause of the blaze that occurred shortly past 3 p.m. at 218 Vann Road, located off the Ahoskie-Cofield Road in the Brantley’s Grove community. 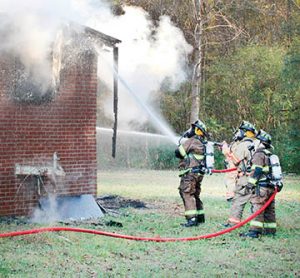 “We were told that the adult woman in the home was cooking a pan of French fries and briefly left the kitchen to check on her child,” Bradley said. “She said she heard a noise coming from the kitchen and when she went to check on it she saw flames shooting up the wall behind the stove.

“She grabbed her child and got out of the house, and then called 9-1-1,” Bradley added.

By the time the first fire unit arrived on the scene just minutes later, flames and heavy, wind-blown smoke were visible outside the home.

Bradley said the woman, Crystal Warren, was renting the home, which is owned by Kenny and Connie Newsome.

“It’s a total loss,” Bradley said of the residence. “The good news is that no one was injured.”

Ahoskie Rural responded to the scene with five units and 17 firefighters.

The Winton Volunteer Fire Department also responded to the scene with three units and 12 members.

Hertford County EMS was summoned to the scene to provide firefighter rehab if needed.

Bradley said his department remained on the scene until 5:30 p.m.

WINDSOR – They’re helping to keep the lights on, both indoors and out. On Tuesday Nov. 15, Dominion North Carolina... read more