AHOSKIE – Some of its graduates call it “cop heaven”.

It’s the FBI National Academy in Quantico, VA; founded in 1935 following Prohibition by late director J. Edgar Hoover.  It has been featured in Hollywood fiction from the current TV series, Quantico, to the film, Silence of the Lambs.

In real life, however, what the training there helps create, and reinforce, is better law enforcement judgment.

Lt. Jeremy Roberts of the Ahoskie Police Department Criminal Investigation Division attended the Academy’s special 10-week investigative training course, which began in July. The course work consisting of some three months of advanced communication, leadership, and fitness training for officers with an average of 19 years of law enforcement experience.

Roberts went on to graduate in September with a class consisting of 230 other law enforcement officers from 47 states and the District of Columbia, 24 foreign countries, three military branches, and four civilian organizations.  FBI Director James Comey was their graduation speaker. 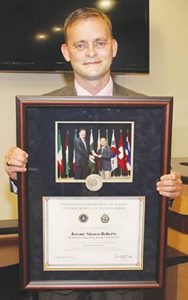 Roberts is the first member of the Ahoskie Police Department to attend the Academy.

“It was a good moment when I actually found out,” said Ahoskie Police Chief Troy Fitzhugh. “I knew he had a great chance because he’s a hard worker and he’s been in law enforcement since 1997.

“He and I worked together,” the Chief related, “and his work was impeccable.  There were a lot of officers there, but Jeremy had such a desire to succeed.  He’s acquired skills and training that was needed and he just elevated himself.”

Fitzhugh says Roberts has helped upgrade and update the department’s investigation equipment since joining the division in 2004 and being promoted to Lieutenant in ’07 when Fitzhugh became Chief of Police.

“It takes a good elite group of men and women to go through that school and then graduate; we’re very proud of him for being one of the ones whose come out,” Fitzhugh contended.

The Chief said Roberts FBI training will help Ahoskie and its Police Department in developing persons, interests, and assisting other officers and agencies with tracking and investigations.

“I believe those skills will be fruitful not just for our department, but other area law enforcement as well.”

Roberts appeared before the Ahoskie Town Council at its Nov. 8 meeting to receive special recognition for his accomplishment.

“He is only the second person I know who has gone through this training,” said Ahoskie Mayor Jimmie Rowe. “I can tell you it is very grueling.”

Roberts gave a briefing on his experience before Council and the Town Manager.

“In the application process I had to undergo rigorous physical training, a background check, polygraphs, meeting with the (FBI) Director, and that took about three years,” Robert explained. “From the time I was accepted to when I had to report was about four or five months.”

Roberts said he wisely used the time to work out at the Ahoskie Community Center (the old Armory) and run the trails at Ahoskie Creek Park to get into super-shape. He then reported to Quantico on July 8.

“July 9, our first day, we had to pass their fitness test of running a mile in ten minutes or less; do push-ups, sit-ups, and pull-ups, before we were measured and weighed and issued our uniforms,” Roberts related.

From there, Roberts said the physical part pretty much mirrored military boot-camp with daily long runs, meals, and classes taught by instructors from all over the world.  Afternoons and evenings consisted of cross-fit training with the FBI SWAT team instructors.

“They don’t care about the whining and the pain,” he joked. “They play music throughout and their favorite saying is, ‘Listen to the music, and not the pain’.  It was the best training I’ve ever received in my life.”

Councilman Stackhouse said the description of the training resembled Rambo.

“They make it tough for a reason,” Roberts said. “There’s only one percent of the world’s law enforcement community that ever gets invited to it, much less pass it. Not just everybody gets to go.”

Roberts said he considers it a blessing to have gone and thanked the Council, and the town, for giving him the opportunity.

“We lost four the first day,” Roberts replied. “Two who couldn’t pass the physical training and two more to injuries that required surgery.  We also lost ten more that did not pass the academics. They all will be allowed to re-apply provided they can pass the pre-tests again.”

Roberts said an offshoot of the training environment is the friendships and relationships that are forged between the students.

“My suite-mate next to me was from Indonesia,” he said, “and I still try to talk with him at least every couple of days.  It was great to meet people from other countries that you would never meet before. It’s an awesome experience.”

The Council said they were proud of Roberts and applauded his efforts.  He brought along a decorative metal frame containing his diploma and photo of him receiving his credentials on Graduation Day presented to him by FBI Director Comey.

“He sat there and handed out all 230 diplomas,” noted Roberts.