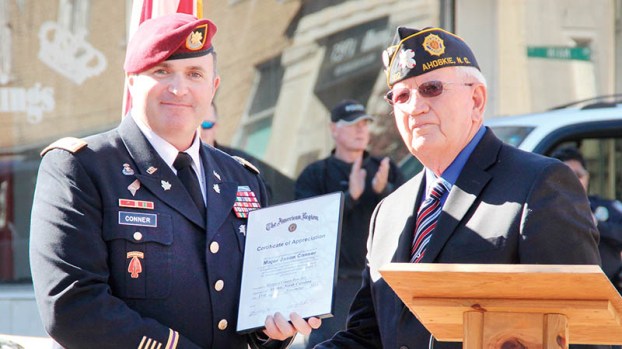 AHOSKIE – They represented decades of America’s military muscle – from 93-year-old World War II veteran Clarence Lassiter of Woodland, to 42-year-old Jason Conner who still proudly wears a uniform and has defended freedom in Iraqi and Afghanistan.

They all came to one place here Friday to share stories of their battles in France, Germany, Japan, Korea, Vietnam, Iraqi and Afghanistan. They are our hometown heroes….those serving in the United States Army, Navy, Marines, Air Force and Coast Guard. 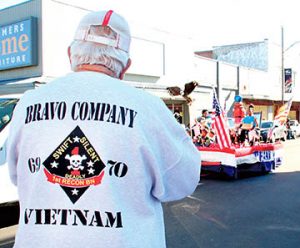 Vietnam veteran Larry Meeks watches as a patriotic float passes by during a parade in downtown Ahoskie on Friday that preceded the Veterans Day ceremony at No Man’s Land Park.

Hertford County American Legion Post 102 hosted these brave men and women at an event held on Veterans Day at No Man’s Land Park in downtown Ahoskie. That event was preceded by a colorful Veterans Day parade, and concluded, after the event at the park, with a luncheon held for veterans at Ahoskie United Methodist Church.

Conner, a Major in the U.S. Army and a 1992 graduate of Hertford County High School, served as the keynote speaker at the Veterans Day salute in his hometown.

“Those VIP’s are our veterans,” he said. “We have them here with us today from World War II, from Korea, from Vietnam, and from our latest conflicts in Afghanistan and Iraqi. But we also have veterans who served elsewhere, in times of peace, but that doesn’t mean they weren’t defending their country. We owe all of them our deepest respect.”

Over the years, Conner said he has listened to great orators deliver speeches. However, some overlooked perhaps the greatest tribute a person in the military can pay to a civilian.

“To my wife, Carolina, you are so beautiful; thank you for everything you do for me; taking care of our two girls (daughters, Alejandra, age 6, and Gabriela, age 4) and taking care of me,” Conner stressed.

The Army Major paid tribute to two local men – Elliott Wright and the now late Eddie Newsome – who he said, “got me going in the right direction when I was in the North Carolina National Guard.”

“I really appreciate what they did for me when I was a young man,” he noted.

While paying respect to all veterans, Connor called those who served in Vietnam as, “our nation’s most resilient and inspirational human beings.”

“I work at the John F. Kennedy Special Warfare Center and School and a lot of the linage there comes from what the military service members did in Vietnam,” Conner stressed. “When they came home they didn’t get the credit they so richly deserved, but so much of what we do today in Special Operations came from what we learned from our Vietnam veterans.”

“We remember our fallen brothers and sisters on Memorial Day; on Veterans Day we celebrate those who are still in the fight and those who served,” Conner said. “We honor the fallen by rejoicing the lives of those brave warriors. Today we respect the families of the fallen by carrying out their duties as veterans of all ages and experience. We do that by fighting for life.”

That fight, he said, may possibly result in a loss of life.

“We will sacrifice our own life for another, regardless of where they’re from, what they believe, or the color of their skin. We fight for our extended family like a pack of honey badgers. You mess with my family, you better watch out.”

“Twenty-two, that’s how many veterans and active duty service members take their lives every day,” he shared. “Let that sink in for a minute. We have to fight for these guys and gals as well. I hope they will ask for help before it’s too late.”

That “fight for life” is close to home in the form of retired US Army Sgt. Major Johnnie Ray Farmer. Conner paid tribute to Farmer, a veteran of two tours of duty in Vietnam, who today is fighting for life.

“He is walking around and still making a difference despite having a mechanical heart,” Conner noted.

In closing, Conner encouraged those in attendance to fight to make a difference in their local communities.

“That could be supporting our local high school student-athletes or reaching out and shake the hands of our military veterans,” he said.

Courthouse security upgrade in the works

JACKSON – A security upgrade project is pending here at the Northampton County Courthouse, which has the unfortunate label by... read more