AHOSKIE – His voice was unmistakable. However, it is now one that has fell silent.

Funeral services will be held at 11 a.m. on Saturday in the gym at Hertford County High School.

The news of Hardy’s death spread fast on Monday within the Roanoke-Chowan area, including among his law enforcement brethren. 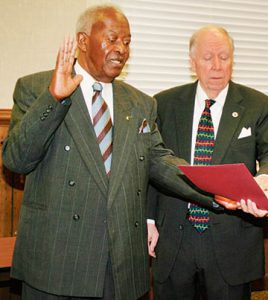 Winfred Hardy Jr. (left) is shown here receiving the oath of office (along with now retired O.S. “Buck” Suiter Jr.) in 2009 as a member of the Ahoskie Town Council. Hardy, who passed away on Monday, also served as Hertford County Sheriff. | File Photo

“Sheriff Hardy paved the way for me,” said now retired Hertford County Sheriff Juan Vaughan who was Hardy’s immediate successor in that job.

“He spent nearly three full terms in office, opting to retire one year early and I was appointed to fill that seat,” Vaughan added. “I had served two years in his department and learned how to be a people person under him. He always had such a big heart; always willing to help those who needed it the most. My heart goes out to his family.”

A few years after retiring as Sheriff, the lure of local politics was too much for Hardy to ignore. In 2009, he sought the one of the Ward B seats on the Ahoskie Town Council and pulled off an upset of then incumbent Councilman Ronald Gatling for that position.

“When I think of Winfred Hardy and his service to the citizens of our town, the first word that comes to mind is passion,” said Ahoskie Town Manager Tony Hammond. “He had a passion to help people in any way he could. He worked with me and with his fellow members of the Ahoskie Town Council to look for ways to reduce our user fees for water and sewer.

“He was also passionate about our streets,” Hammond continued. “He was the one who led the effort that is ongoing today to repave the majority of our streets.

“Winfred Hardy was an exceptional man and a great family man. On behalf of the Town of Ahoskie, I express sympathy and condolences to his family,” Hammond concluded.

Hardy would be the first to say that politics is a popularity contest. He served one, four-year term as an Ahoskie Councilman and sought reelection in 2013, only to lose his seat to current day council member C. David Stackhouse.

However, Hardy was never the type to sit idle.

He was a 15-year member of the Hertford County ABC Board. For a number of those years he was chairman of that board. He also served for 20 years as a member of the Roanoke-Chowan Mental Health Board.

Hardy was also active in his church, Zion Grove Missionary Baptist, where he served as a Deacon. He joined Zion Grove as a member at the young age of 12.

“Sheriff Hardy was extremely community oriented,” said local Senior Resident Superior Court Judge Cy Grant. “A lot of folks do not realize that other than his public service as an elected Sheriff and member of the Ahoskie Town Council, he was also a business owner.”

Judge Grant noted that although some groups and organizations attempted to steer Hardy in a certain direction, he chose another direction.

“I commend Winfred for always doing what he personally felt was the right thing to do,” the Judge stated. “He was put under some pressure at times, but he always made decisions on what was best for all, and not just for certain groups.”

Judge Grant also remembered of the history Hardy made in 1986.

“He was the first black to be elected as Sheriff in Hertford County….that was a big deal,” Judge Grant stressed. “But no matter the color of his skin, he ran a good department and he was well respected.”

Hardy was also a family man. He and his wife, Lena, raised five children, each of whom have made their individual marks in life.

The oldest is Cynthia H. Riddick, assistant principal at Bearfield Elementary School in Ahoskie. Roger Hardy of Ahoskie is a long-time employee of Maola Milk. Rev. Michael Hardy serves as pastor of New Harrellsville Chapel Church. Terrance Hardy and Timothy Hardy followed in their father’s law enforcement footsteps, respectively as a Highway Patrol Trooper in Wayne County and a Captain with the North Carolina Wildlife Commission.

A native of Ahoskie, Hardy was a 1955 graduate of Robert L. Vann High School. After graduation, he immediately sought a job – landing one as a truck driver for Ahoskie Fish & Produce.

However, law enforcement was Hardy’s passion. He joined the Ahoskie Police Department as a part-time officer in 1963. Two years later he was moved to full-time status and remained with the town until 1986, eventually rising to the rank of Captain and briefly served as Acting Chief of Police.

Back in 1972, Hardy served as the Training Officer for a law enforcement rookie at that time.

“He was an inspiration to me,” said current day Northampton County Sheriff Jack Smith who started his career with the Ahoskie Police Department before joining the North Carolina Highway Patrol.

“I’ll never forget what he taught me….it has stuck with me for all the years I’ve been in law enforcement,” Smith continued. “He had such a big influence on my life, as well as other young officers of that same era, people like Steve Hoggard, who later became Ahoskie’s Police Chief, and Doug Doughtie who is now the Sheriff over in Dare County. He helped mold their careers as well as mine.”

Smith said that Hardy “didn’t have a lot of fancy educational degrees hanging on his wall, but he did have a ‘doctorate’ in common sense.”

“Winfred Hardy was a dear friend and a great family man. I will truly miss him,” Smith concluded.

Hardy sought the office of Sheriff of Hertford County, elected in 1986 and served two full terms and three years of another before retiring in 1997.

Perhaps his proudest moment came in December of 2004 when his portrait was unveiled in the old Hertford County Courthouse. It was customary at that time for a former Sheriff of the County to have an oil painting commissioned and for it to displayed prominently in the courtroom

On that day, Hardy reflected on his long career in law enforcement, one that spanned 35 years.

“I went to work with the Ahoskie Police Department back in 1963, part time,” Hardy reflected in a story pulled from the Roanoke-Chowan News-Herald archives. “I worked with them two years as a part time officer.

“Back then, they didn’t have but one car and all of us had to share that one car… and let me tell you, that car ran 24 hours a day, seven days a week non-stop. They had to finally get another car,” he added.

He added his desire to serve as Sheriff of Hertford County was tied to his dedication to help others.

“I wanted to be sheriff; I love people and I’ve always wanted the best for people,” he said.

He loved people to the very end….the final chapter of a long career in public service.