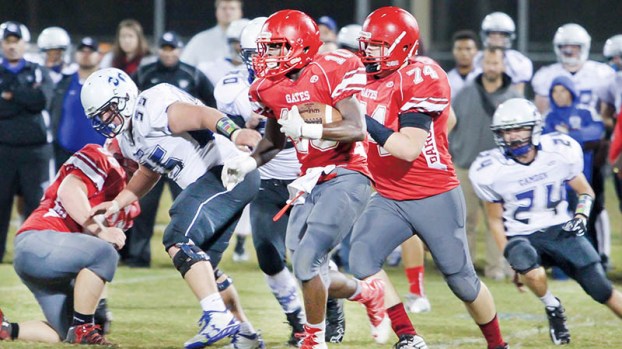 With offensive lineman Matt Spivey (#74) by his side, Robert Walker (#10) rushes past the Camden defense during Friday night’s homecoming Game at GCHS. Walker had a huge night – rushing for 101 yards and a touchdown; grabbing four passes for 110 yards and two other scores; and picking off a pass on defense, but the Red Barons lost a heartbreaker, 35-34. | Photo by Charles Revelle

Despite racing out to a 20-0 lead over the first 12 minutes and 14 seconds of a key conference battle vs. rival Camden High School, Gates County struggled down the stretch in matching that early offensive outburst and had no answer in stopping a potent option attack by the Bruins, suffering a 35-34 loss on Homecoming Night at GCHS.

The loss was Gates County’s first since Aug. 26 and their initial loss in conference play as they fell to 7-3 overall and 5-1 in league play. However, the Red Barons still have a shot at claiming the league’s top seed for the state play-offs with a victory at home vs. Plymouth this Friday (Nov. 4).

What made this setback sting even more was the way the game ended.

Trailing for the first time all night at 35-34 after a Camden score with 1:57 left in the game, the Red Barons still had a chance. Using a pair of key passes from Jawan Riddick to Demond Jones (16 yards) and Jordan Robinson (24 yards), Gates quickly marched as deep as Camden’s 12 yardline with less than 30 seconds remaining. Facing a 4th and 8 play from that point, GCHS skipper Matt Biggy called on freshman kicker Caleb Brickhouse to give the ‘Barons the lead.

After a series of five-yard penalties on both clubs on a pair of Brickhouse attempts (both missed their mark), Biggy rolled the dice on a 4th-and-3 play (after a second offsides flag on the Bruins) and put his offense back on the field. However, a rushing attempt failed to move the marker and Gates surrendered the ball on loss of downs and the game as well.

In the early going this game appeared to be a blowout win for the ‘Barons as they scored on their first three possessions to grab a quick 20-0 lead.

GCHS scored on the game’s opening series, marching 59 yards in nine plays, all on the ground, capped by Robert Walker’s 3-yard TD run. Walker toted the pigskin six times on that drive, accounting for 38 yards.

On Gates County’s next possession (via an interception by Walker), the ‘Barons benefitted from a roughing the punter call to keep a 67-yard scoring drive alive, which ended on a 12-yard scoring pass from Riddick to Walker.

A fumble recovery at his own 17 yardline by Robinson halted Camden’s first serious offensive threat of the game and set-up the ‘Barons on offense. Five plays later, on the first snap of the second quarter, Riddick and Walker connected again, this time on a 72-yard scoring bomb for a 20-0 lead.

However, as the ‘Barons found out, containing Camden’s option attack would prove difficult for the remainder of the game.

After being limited to only four plays and 37 net yards over the opening 12 minutes, the Bruins kicked their potent offense in high gear. They ran 25 plays in the second quarter alone, accounting for 221 yards and two touchdowns (runs of 23 yards by quarterback Brandon Underwood and 24 yards by running back William Bunton Jr.).

Gates County did sandwich one other score in-between the two TD’s by the visitors in the second quarter as Riddick called his own number on a 4th-and-goal from the one yardline to make it a 26-14 GCHS lead at halftime.

Both teams had long scoring drives to open the second half.

GCHS answered with a 14-play, 57-yard drive – one where the Red Barons converted two fourth down snaps. Riddick capped the drive with his second rushing TD, this one a nifty 6-yard run as he tip-toed along the sideline into the endzone for a 34-21 lead at the 2:14 mark of the third quarter.

Using the quick feet of Underwood (who rushed for a game-high 229 yards, of which 141 came in the second half), Camden came right back to score on their next series – an 8-play, 63-yard drive capped by Underwood’s 5-yard run and his ensuing two-point conversion run that trimmed the Bruins deficit to 34-29.

After being denied a scoring opportunity thanks to a “red zone” stand by the GCHS defense (key plays were a sack by Ron Olsen and a goal-line interception by Demonte Miller), Camden’s defense answered when Colby Sawyer pounced on a Red Barons fumble at the GCHS 31 yardline. Eight plays later, Bunton scored what proved to be the game-winner on a 4-yard run with 1:57 left in the contest.

Walker led the Red Barons with 101 rushing yards on 20 carries and 110 receiving yards.

While Hertford County and Gates County have conference titles on the line in their games, Bertie and Northampton are looking... read more