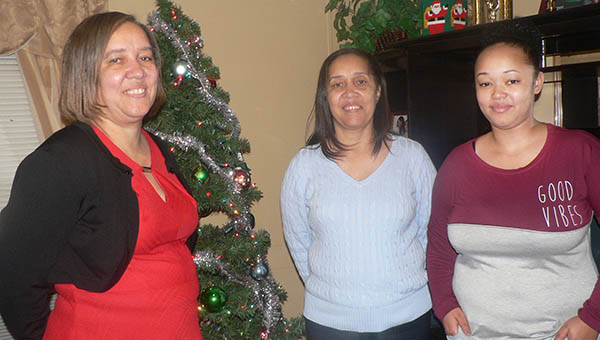 With the hectic Christmas season upon us and a seemingly endless supply of bad news on every television station, there is a need for a good heartwarming story to warm the cockles of our hearts. This is such a story.

Cynthia Edwards of Roanoke Rapids, formerly of Rich Square, is on top of the world these days. She is living in a beautiful home with her amazing 15 year old daughter Megan and has a son who is a successful college student.

Cynthia, herself, is a straight A student at Halifax Community College, getting ready to graduate in May 2016. After graduating, with a degree in Human Services Technology, Cynthia has been accepted to attend Wesleyan College in Rocky Mount.

She has an almost certain academic scholarship there from Golden LEAF Foundation. She plans to attain a bachelor’s degree in Social Work at Wesleyan College, leading her to have her head in the clouds and is very optimistic about a bright future.

Unfortunately, this has not always been the case. Back in 2001, Cynthia was diagnosed with Nephrotic Sydrome which is a kidney disease usually found only in children. Her physician told her the disease was extremely serious when found in an adult.

Her health progressively worsened until 2012. She was on dialysis and unable live a normal life. Eventually, her physician told her she would not survive if she didn’t get a kidney transplant.

Since a family member is the most likely candidate to be a compatible donor, all of her siblings were tested. Her identical twin sister, Natalie Grant, ended up being a match. Her physician, Dr. Ellis at Duke Medical Center, told her that receiving a kidney from a twin is just like getting your own kidney.

When asked about coming to the aid of her sister, Natalie said it was a “no brainer” for her to donate one of her healthy kidneys.

“Back when we were born in 1963, our mother had no idea she was having twins. The doctor thought he was finished after Cynthia was born,” said Natalie.

But, low and behold, another little girl emerged from the shadows of the womb. Natalie said she realized when Cynthia got sick that she was the only one who could save her. She knew then that she must have been hiding in the shadows for a reason.

Megan, Cynthia’s daughter, said she was very afraid when the two surgeries began. Both her mother and her aunt were under the knife at the same time and she didn’t know what the outcome would be. But, after living through the ordeal, she knew she wouldn’t hesitate to be an organ donor if the opportunity arises.

Luckily, the operations were successes for both ladies. Cynthia’s body accepted the kidney with no rejection and Natalie made a speedy recovery after the transplant.

Both sisters shared that the “rock” that enabled them to make it through the ordeal was their mother, Elizabeth Daniels. Natalie said her mother never tried to sway her decision about whether to donate.

“She remained calm and collected during the surgeries, encouraging everyone else to be optimistic,” Natalie said of her mom.

Mrs. Daniels didn’t let her feelings show until the Christmas after the transplant. The surgeries took place in October, 2012 and by the time both sisters had recovered it was Christmas. She gave each daughter a small ornately decorated box. In each box was a letter she had written to each daughter during the organ transplant.

Natalie said she felt all the emotions her mother had suppressed during the surgeries were captured in the words of the letters.

In Cynthia’s letter, her mother conveyed that she feared losing her daughter and felt Cynthia had been saved for a special reason. Her mother added that Cynthia should not let anything deter her from her dreams. She had been given a second chance for a reason and she should use it to do something great.

This was the main contributing factor that convinced Cynthia to go to college and get a degree in a field that would truly help people.

In Natalie’s letter, her mother told her how proud she was of her for being so selfless and giving the ultimate gift, “life”, to her sister.

Both girls shared that they feel most people take things for granted and get upset about little things. They forget what is truly important in life.

They have done extensive research about the organ transplant process. With this research and their own personal experiences, they plan to serve as advocates for the donor/donee process. They plan to share their story in speaking engagements to let others know they the process is easier and safer than they think and there are many people waiting to find donors that would save their lives.

Happily, Cynthia is extremely healthy now. She is only on one medication and feels great – thanks to her wonderful sister – Natalie. This is a Christmas story we all can learn from about being selfless and fulfilling our true purpose in this world.