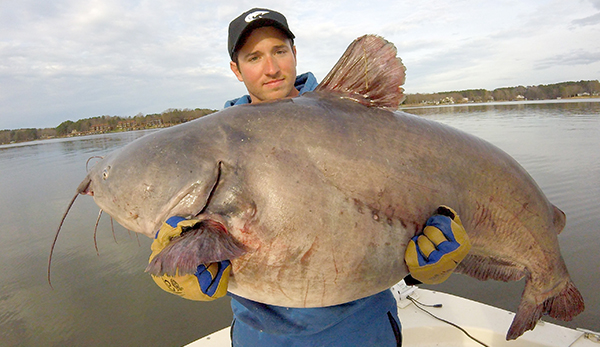 Murfreesboro native Zakk Royce “muscles up” to hold the state record 105-pound blue catfish he caught on Monday morning near the dam on Lake Gaston. Royce operates a fishing guide service on the lake. Contributed Photo

LAKE GASTON – Records are made to be broken, but not often by the same person within a 24-hour period.

But that did indeed happen for 25-year-old Zakk Royce, a Murfreesboro native who operates a fishing guide service on Lake Gaston and is also a full-time college student in Wilmington.

“It’s like a dream come true,” said Royce on Tuesday after getting some well-deserved rest. “It has always been my goal to break the state record for blue catfish, but to reach that goal and then break my own record a day later….wow, that’s all I can say.”

On Sunday, Royce set out alone on Lake Gaston in search of a “big cat” near the dam. He was fishing a Carolina-style bottom rig, with cut bait (shad) in 50-to-60 feet of water.

“I had five lines in the water and had caught a couple of smaller catfish (15-to-20 pounds) when the big one hit,” Royce recalled.

He said the rod tip was bent in the water by the time he reached for it in the rod holder.

“I didn’t have time to reel in the other lines; I just grabbed the rod and was able to maneuver it around the others lines in the water; that was a stressful time,” Royce said.

After a 20-minute battle, Royce managed to get the catfish alongside his boat, but a problem arose.

“The fish was so big (40-inch girth and 52 inches in length) that I couldn’t get my (landing) net under its body,” Royce remarked. “I finally managed to get the head in the net, but it was so heavy and the sides of my boat are very tall, I couldn’t pull it in the boat by myself.”

Lady Luck was on Royce’s side that particular day as fishing a short distance away was a friend, Michael Bracy of Severn.

“He was in a kayak fishing for bass; I called him and he paddled over to help me,” Royce said. “It’s a good thing Michael was there. He got in my boat and helped me pull that big cat over the side. It was so big that it bent the handle on my heavy-duty salt-water style (landing) net. I had to remove the handle in order for Michael and I to grab the bottom of the net and pull it in the boat.” 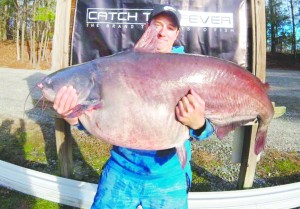 One day prior to landing a 105-pound blue “cat” from the waters of Lake Gaston, Zakk Royce caught this 91-pounder, which established a new North Carolina record that stood for only 24 hours. Contributed Photo

Because it was Sunday, there was no where Royce could go to weigh the fish on a set of state-certified scales. Plus he needed a North Carolina Wildlife Commission biologist on hand to certify the fish and the weight.

“I didn’t have any other option than to baby sit that fish all Sunday night on the boat,” Royce said. “I called my dad (Jon) and we took turns through the night pumping fresh water into the live well on the boat, trying to keep the fish alive so we could weigh it officially on Monday.”

At 9 a.m. on Monday, Royce weighed the fish on certified scales at Ace Hardware of Lake Gaston. A state biologist arrived and certified the weight at 91 pounds, determining that it had officially broke the existing state record of 89 pounds set in 2006 by Eric Fincher in Badin Lake (Stanly County).

After that certification process was complete, Royce and his dad went back out on the lake and released the state record catfish at the exact spot where it was landed.

“I told dad at that time that I still had some cut bait; so let’s go fishing,” Royce laughed. “We were basically near the spot where I had caught the 91-pounder a day earlier and we dropped some lines in the water. Thirty minutes later one of those rods doubled over.

“I could tell when I yanked the line for the very first time that this was another huge fish,” Royce noted. “It was a hard, 30-minute, give-and-take battle. At one point, the fish surfaced about 20-to-30 yards out from the boat and I could tell then and there that this was a fish capable of being 100 pounds or more.”

Royce was correct in that assumption.

“I’ve caught some huge saltwater fish in my time, but was the biggest freshwater fish I’ve ever seen,” Royce remarked.

Like the “cat” from a day earlier, Monday’s catch was so large (42 inches in girth and 55.75 inches long) that it wouldn’t fit in the landing net.

“We couldn’t even get the head of that fish in the net,” Royce stated. “We figured the only way to get it in the boat was for dad to hold its head and neck and I reached down around the fish’s mid-section and we managed to basically man-handle that fish into the boat.

“All I could think about during those few anxious moments was the line breaking or the fish spitting out the hook, and then watching a 100-pound catfish swim away,” Royce continued. “Who would have believed us if that had happened.”

Again, Lady Luck smiled on Zakk Royce as just as the fish hit the bottom of the boat, the hook came out of its mouth.

Royce and his father took the prize catch back to the same Ace Hardware. It tipped the scales at 105 pounds, thus establishing a new state record just 24 hours later.

“When I called the state biologist, who by the way hadn’t quite made it back to Raleigh, he thought I was joking,” Royce said. “When I told him I was telling the truth, he turned around and came back to the store and certified the catfish as a new state record.”

For Royce, the time he has invested over the past 14 years learning every nook and cranny of Lake Gaston has paid off. He will pocket $15,000 for his record catch from Big Cat Fever rods, his gear of choice, along with a Accurate brand reel and Berkley 30-pound test line.

“I’ve been seriously involved with fishing for catfish on this lake for the past five or six years, but I’ve fished here for other species for nearly 15 years,” he said. “The big catfish are here because this lake is so big and very deep, so there’s plenty of places for big fish to hide. Plus there is a steady food source on the lake for those big fish to feed on.”

He also credited the catch-and-release program, an effort to maintain the number of big fish in the lake, thus giving other anglers the thrill of landing a huge catfish.

As far as beating his own state record again, Royce said it’s possible.

“It will be tough to beat that record, but like they say, records are made to be broken,” he admitted. “Perhaps one of my tour guide customers (Blues Brothers Charters) will break the record while on my boat.”

In the meantime, Royce will continue to seek to further his education at Cape Fear Community College where he is majoring in Marine Technology.

“I live in Wilmington during the week, but the waters of Lake Gaston call me ho    me on the weekends….there’s another big cat waiting to be caught,” Royce concluded.