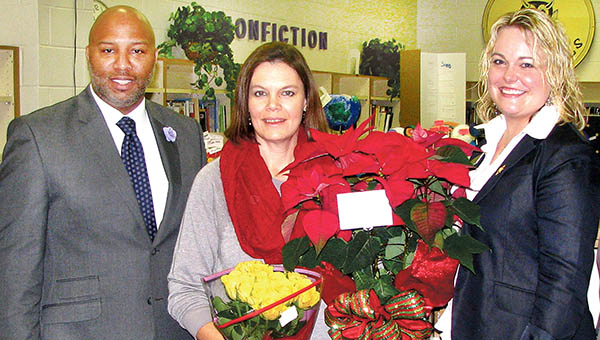 CONWAY – What started as a Christmas concert here Wednesday at Conway Middle School ended as a surprise to Northampton County Teacher of Year Marie Smith.

The fifth grade science teacher at CMS joined her students in the auditorium for a Christmas concert by the school band and enjoyed the performance of some seasonal favorites.

After about four holiday favorites by the band, CMS Principal Oliver Holley stopped the concert to announce the arrival of a few special guests, including Chowan University personnel, representatives with the North Carolina Department of Public Schools, Smith’s mother and other family members, and Northampton County Schools Central Office representatives.

Triplett said, “I’m here to honor one of your great teachers this morning. She treats you as if you’re one of her own.

“She’s a dependable team player – patient, kind, nice, and lots of fun,” Triplett said. “She’s smart and creative and she does fabulous projects with you…”

At that point the decibel level rose high among the student audience, some of whom were yelling excitedly, “Ms. Smith, Ms. Smith!”

Triplett called for a big hand for the 2016 North Central Regional Teacher of Year, Marie Smith.

As they say in the sports world, “And the crowd went wild.”

The students clapped and cheered and whistled and called out Smith’s name over and over, clearly excited and proud for their science teacher.

The principal guided Smith from her seat with the students and took her on stage to be presented with a bouquet of flowers.

She thanked the students for their enthusiastic expression of pride for her accomplishment.

Principal Holley then presented Smith with an even bigger bouquet on behalf of the staff and students of Conway Middle School.

“It is truly and honor to have days like this as a principal,” Holley said. “When you see the hard work of your staff recognized, not only in this building, not only in this district, but also in the state. I look forward to the announcement in March that she’s the state Teacher of the Year. I’m already claiming that for Conway Middle School. Ms. Smith, thank you for all your hard work.”

Being named Regional Teacher of the Year means Smith is one of nine finalists for the statewide award that will be announced early next year.

Sonia Rinehart, the lead on the regional selection committee from DPI, explained why Smith was selected.

“She is total problem-based learning with her students in collaborative groups. She differentiates to meet all levels of students with rigor,” Rinehart said.

Smith doesn’t let lack of equipment or funding stand in the way of the educational achievements she wants for her students, said Rinehart.

“She is creative and innovative and finds every way possible so students can get more than ‘sit and get.’ The students really do hands-on learning, and that’s what it’s all about,” Rinehart noted.

She said Smith’s students “internalize the learning and are able to apply it.” Rinehart added, “For fifth graders to work collaboratively in labs all the time is amazing. Her classroom management is down-pat. Fifth graders are able to take control of their own learning.

“She is like a conductor choosing which track to go through and helps them get there. The students learn that it’s okay to take a risk, because we learn when we don’t get it right the first time.”

“Being given the tools by the teachers in my classroom to learn on my own was especially empowering,” Smith said. “How wonderful to know that I had the ability to learn anything I wanted to learn if I just worked hard enough. The idea that I could one day do the same thing for others that those teachers had done for me was the driving force behind my decision to be a teacher.

“Having a career that focused on what I had come to love and value, the acquisition and use of knowledge, was definitely what I wanted to do,” Smith added. “While the numerous career possibilities were presented to me, I realized that I kept feeling drawn back to the idea of teaching.”

She has now been teaching in Northampton, her home county, for 23 years.

“I have made improving myself as an educator a priority,” Smith said. “One of my proudest moments [before Thursday’s announcement of being named Regional TOY] was when I received my certification from the National Board for Professional Teaching Standards in 2002. The time I spent that school year reflecting on my teaching and documenting my work was one of the most difficult yet rewarding years of my career.”

Smith decided to go to graduate school at Chowan in 2010, even though she was a single mother of three school-age children at the time. She graduated in 2012 in the first class of Chowan University’s graduate school.

“If I’m willing to take a chance and work hard,” Smith said, “I can continue to grow and learn throughout my lifetime.”

Smith’s recognition marks the second time in three years that a Conway Middle School instructor has earned Regional Teacher of the Year honors. Rhonda Holmes was selected in 2013.