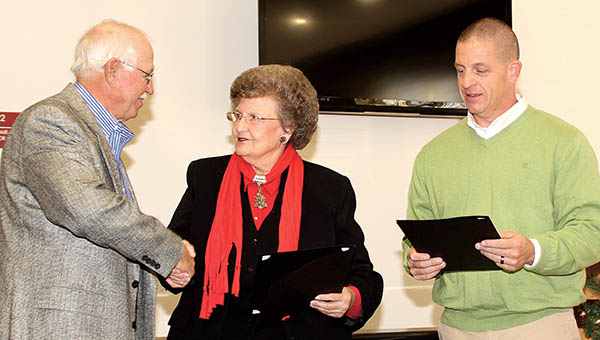 Retiring Ahoskie Town Councilwoman Elaine Myers and outgoing Mayor Brien Lassiter (right) were each given a Resolution of Appreciation on Tuesday for their respective terms of service. Making the presentations was new Ahoskie Mayor Jimmy Rowe (left). | Staff Photo by Cal Bryant

AHOSKIE – Following the municipal election held last month, the Town of Ahoskie has a new Council member and a new face sitting in the Mayor’s chair.

While change is always certain in the political landscape, so is the fact that former leaders set the proverbial table for others to follow.

Myers spent 14 years on the Council, representing Ward A from Nov. 13, 2001 through Dec. 8 of this year. During that time she served with three Mayors – the now late Arthur Lee Wiggins as well as Linda Blackburn and Brien Lassiter along with 11 Council members.

As written in a Resolution of Appreciation that was formally adopted and presented at Tuesday’s meeting, Myers and Lassiter were praised for, “(serving) with diligence and with the best interest for all of the citizens of the Town of Ahoskie” and because of (their) great service, “the Town Council of the Town of Ahoskie wishes to show appreciation of the citizens of this town for this service.”

“This has been a pretty long journey for me, but it’s been a good journey,” stated Myers after receiving the Resolution of Appreciation. “I’ve learned a lot. It’s been my pleasure to serve the Town of Ahoskie.”

Myers noted some of the major accomplishments of the Town Council during her three and one-half terms on the board, to include a new, state-of-the-art wastewater treatment facility that led to Ahoskie’s growth, a new Police Station, a new Fire Station, and the Ahoskie Creek Recreational Complex.

“These things just didn’t happen,” Myers stressed. “It all came together not just due to the efforts of the Town Council, but the town’s department heads as well.

“While a lot has been done during my time on the Council, there remains much to be done,” Myers noted. “One of those things is a new public library. I really wanted that to become a reality in my time. I’ve tried hard to get a new library since 2005 but it just hasn’t happened. However, after hearing the town’s (financial) audit report this morning I understand there are some other budget needs, but I still feel that the town will build a library.”

She praised her former colleagues on the Council for working as a team.

“I challenge you to continue to work as a team,” Myers said. “To the new member of the Council and to the new mayor, I urge both of you to work with the team. I love Ahoskie and I hope you do too.”

In presenting the Resolution of Appreciation to Lassiter, newly elected Ahoskie Mayor Jimmy Rowe told the former mayor, “This will be a hard seat to fill.”

As part of the public comments portion at Tuesday’s meeting, Stewart White voiced his opinion of what Myers and Lassiter had meant to him.

“I would like to thank Mayor Lassiter for his leadership for this town,” said White, who serves as the manager of Ahoskie’s Wastewater Treatment Plant. “He has done a lot for this town and for our local community, especially in the area of recreation for our youth and adults.

“I have a special place in my heart for Mrs. Elaine Myers,” White continued. “She has been a rock during my years of employment by the town and I want to personally thank her for some of the decisions she made that has helped to improve the quality of life for those living in this town and those working for this town.”

Meanwhile, new Mayor took the “team” suggestion made by Myers to heart.

“Yes, I have full confidence that this board will work together as a team,” Rowe remarked. “I thank you Mrs. Myers for your work and service to this town.”

Freeman also thanked Myers for her representation on the Council for 14 years.

“She did a great job,” Freeman said. “I’m looking forward to working with the board members. We have great leadership and I support (Town Manager) Tony (Hammond) and his work and the work of the town employees. I’ve grown up here in Ahoskie and it’s my honor and privilege to be a part of this Council.”