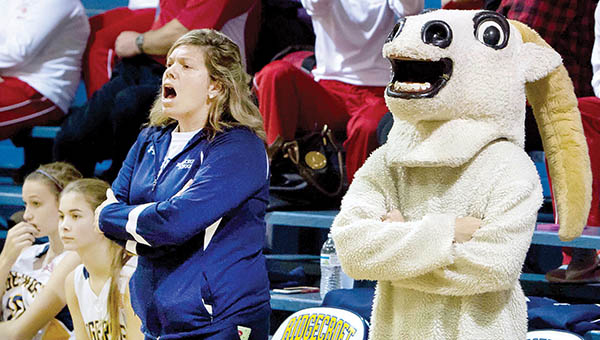 AHOSKIE – If Nick Brantley was still just a mortal man here on Earth, he would request a ring-side seat for the championship round of a basketball tournament now named in his memory.

The “Final Four” games for the 10th annual Lt. Nick Brantley Scholarship Basketball Tournament will be contested on Friday, Dec . 4 in the gym at Ridgecroft School.

In the varsity girls title game, Pungo will meet Ridgecroft at approximately 6:15 p.m. Both teams advanced with unblemished records thus far in the tournament.

Pungo defeated Albemarle School in their tournament opener on Monday before edging Lawrence Academy, 48-46, on Tuesday.

The varsity boys championship game will pit Pungo against Southampton.

On consecutive nights (Monday and Tuesday), Southampton defeated Ridgecroft, 58-36, and Bethel Assembly Christian Academy, 50-33. Pungo followed the same schedule, first dispatching Albemarle School and then surviving a thriller vs. Lawrence by a final score of 58-57.

The varsity boys championship game will tip-off at approximately 7:45 p.m.

The junior varsity championship games will also be contested on Friday.

In the jayvee girls contest (4 p.m.) Lawrence Academy will meet the winner of Wednesday night’s semifinal match-up between Northeast and Southampton.

The jayvee boys championship game (approximate 5:10 p.m. tip-off) will pit Pungo against the winner of the Southampton vs. Ridgecroft semifinal contest from Wednesday night.

There will be an awards presentation at the conclusion of the varsity boys game, to include the announcement of the winners of college scholarships

Admission to Friday’s championship round is $5 per person. Concessions will be offered for sale.

The tournament is held annually in memory of the late

Thomas Nicholas “Nick” Brantley. He was a two-sport standout at Ridgecroft School who later graduated from Virginia Tech.

Brantley was commissioned as an Ensign in the United States Navy and immediately began his flight training in Pensacola, FL.

He excelled as a pilot and flew both fixed-wing and rotary-winged aircraft.

After receiving his Wings of Gold, he reported to Mayport, FL for his initial training in the SH-60B Seahawk. Upon completion of training, he received the Seahawk Award as the top student in the Fleet Replacement Squadron and rose to the rank of Lieutenant.

Brantley and his crew were killed on Sept. 24, 2005 when their Navy Seahawk helicopter went down off the North Carolina coast during a training exercise.

‘Give the gift of you’