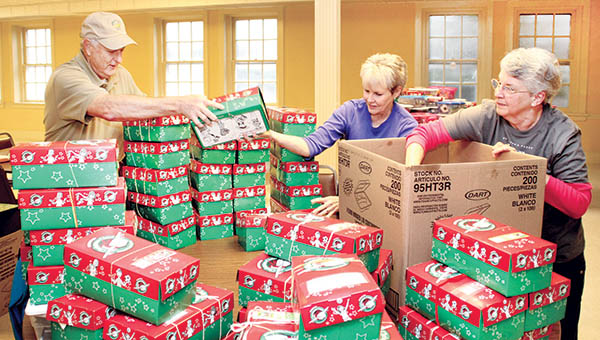 Meherrin Baptist Church members A.B. Flanagan (left) and his wife, Ruth Anne (center), help Rosa Swain of First Baptist Church of Ahoskie sort through some of the “shoebox” gifts that will soon find their way to less fortunate children around the world in time for Christmas. | Staff Photos by Cal Bryant

AHOSKIE – The gifts wrapped inside colorful paper are simple in nature. But remember: it’s not the gift, but the thought that counts.

On a cold and blustery Monday morning, 558 gifts were loaded in the back of a truck. Their next stop was Rocky Mount….and then shipped all over the world to help put a smile on the faces of children who perhaps may have awakened on Christmas morning without the opportunity to unwrap a gift.

Thanks to the efforts of churches such as First Baptist of Ahoskie along with thousands of others across the nation, “Operation Christmas Child” delivers gifts to children in need overseas. It is a project of the international Christian relief and evangelism organization Samaritan’s Purse who will distribute these gifts of joy for children around the world living in extreme poverty or affected by war, disease and natural disaster. For many of these children it will be the first gift they have ever received.

Nancy Neal serves as the coordinator for the Operation Christmas Child collection site at First Baptist Church of Ahoskie. 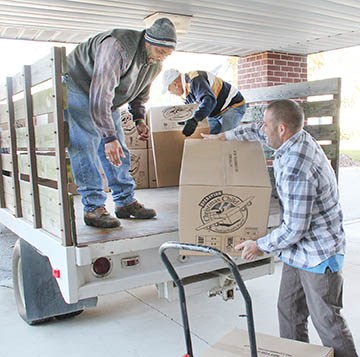 Jason Perry (right) hands one of the Operation Christmas Child shipping boxes to Kenneth Holley while William Holley (background) carefully arranges another box on Monday morning. All totaled, 32 boxes (containing 558 “shoebox gifts”) were filled by the efforts of area churches.

“Serving as an Operation Christmas Child volunteer for Samaritan’s Purse alongside countless others in a worldwide network gives me great joy and fulfillment,” Neal said. “We feel this good news goes from our state to the ends of the earth.

“All year long I shop for quality gifts, taking advantage of sales, that will fit perfectly into a shoe box,” she continued. “I want what I send to be an answer to a needy, deserving child’s heart.”

Neal added that she likes to include school supplies in the boxes she donates as she stressed the importance of education.

“This year I decided to donate boxes destined for older children because I’ve heard from missionaries overseas saying that age group is the most neglected,” Neal remarked. “Some boys are getting hammers and nails or screwdrivers and screws for home improvement.”

Neal summed up her feelings about Operation Christmas Child based on the words her pastor at First Baptist offers during each benediction prayer.

“He tells us to love generously. That’s what I want to do…planting seeds of mercy and kindness yields a harvest of blessing in my own life,” she said.

Rosa Swain is among the volunteers working at First Baptist Church of Ahoskie to accept these “boxes of love.”

“We’ve been involved now for five years as a collection site for Operation Christmas Child through Samaritan’s Purse,” Swain said last week. “We contact the churches and individuals in our area to let them know we’re a collection site. We then take the boxes to a regional site in Rocky Mount; from there they go to a site in Charlotte where they’re processed and made ready for shipment overseas as well as here in the United States to provide some happiness and cheer to our own underprivileged children.”

Several tables in the church’s fellowship hall were piled high with these shoebox gifts. On Monday (Nov. 23), they will be loaded onto a truck and driven to Rocky Mount.

“Other than handling the boxes in collection and then loading them on the truck, we do not touch the boxes…we do not open them,” Swain noted.

On its exterior, each box contains a colorful sticker containing information pertaining to whether the surprises inside are for a boy or a girl and the ages of that child. Those donating those gifts can choose the gender of the recipient as well as the age group (2-4; 5-9; 10-14).

“Through the Samaritan’s Purse website you can follow your box and you’ll receive an email on where your box was delivered,” Swain said.

She added that Samaritan’s Purse makes suggestions on what types of gifts to pack – to include a “wow” item like a doll or soccer ball, and other fun toys, along with school supplies, non-liquid hygiene items (toothbrushes, bar soap, washcloths, combs, etc.) and notes of encouragement. The latter may include a photo of the person or family donating the gift, along with their address as the child receiving the gift may choose to correspond via a letter of thanks. It’s also suggested to include a $7 donation inside the box to assist Samaritan’s Purse in offsetting shipping costs.

On a rainy Thursday morning last week, A.B. Flanagan and his wife, Ruth Anne, toted in 65 shoebox gifts to the First Baptist Ahoskie collection site. The Flanagans attend Meherrin Baptist Church in Murfreesboro. They promised more were on the way before Monday’s ship-out date.

“We haven’t personally witnessed children overseas opening Operation Christmas Child gifts, but Ruth Anne and myself have been on several missions trips to Ukraine where items were donated….that’s a treat to watch someone who has nothing receive an item,” Mr. Flanagan said. “They are so appreciative of anything they receive, no matter what it is. They’ll hang on you and love on you. They act like you just parked a brand new car in their driveway.”

“The purpose behind Operation Christmas Child is to help ensure that children who come from families unable to provide anything at Christmas at least have one gift to open during this most special time of the year,” Swain said.

Samaritan’s Purse identifies the areas of the world where these gifts are most needed.

“It’s a great effort to be involved with and I’ve enjoyed every minute of it,” Swain stressed. “Here at First Baptist, I work with a group of WMU women and we all enjoy being a part of this; we enjoy putting together the boxes we donate.”

Swain noted that it was fairly easy to choose appropriate items for the younger children; and that the majority of the boxes coming into the First Baptist collection site were marked for ages 2-4 and 5-9.

“Our group decided to try and do something special for the older children, those ages 10-to-14,” she remarked. “We started packing boxes with notebook paper and pencils because we learned that if they did not have those simple items they could not attend school. We’ll also pack needle, thread and buttons as well as material so they can repair their clothing or make a simple garment. The older children also seem to like a toboggan, mittens and socks as well as flip flops.”

Swain also noted that some local families will involve their own children in the “shoebox” gift process.

“I’ve heard from some that they will take their child shopping and let them help pick out the gifts,” she said.

“She told us of how rewarding that experience was….to be there to see the smiles and to feel the love and appreciation of those underprivileged children when they open those boxes,” Swain stated. “It makes you feel good to know that you helped in some way to let these children know that they are loved.”

“We have so much to be thankful for here in America. Most of us have a roof over our heads, beds with pillows to sleep on, and food on our table. But for many children living overseas, tough living conditions and extreme poverty have left them with little hope,” said Operation Christmas Child Regional Director Keith Burney. “It is amazing to see the joy on children’s faces when they receive these gifts. It can be a tangible reminder that they are loved and not forgotten, despite their difficult circumstances.”

After being dropped off at a local collection site, these boxes will make the long journey overseas, traveling by any means necessary—boat, plane, train and even elephant—until they reach the hands of children in need. In 2015, Operation Christmas Child hopes to collect enough shoebox gifts to reach more than 11 million children. Since 1993, the project has delivered shoebox gifts to more than 124 million children in over 150 countries and territories.

Shoebox gifts are collected year-round at the Samaritan’s Purse headquarters in Boone, North Carolina. With a computer or mobile device, anyone can conveniently pack a personalized Operation Christmas Child shoebox gift on the Samaritan’s Purse website. Go online to select toys and gift items, write a note of encouragement and “pack” them in a shoebox.

For more information on how to participate in Operation Christmas Child, call (704) 583-1763 or visit samaritanspurse.org/occ.