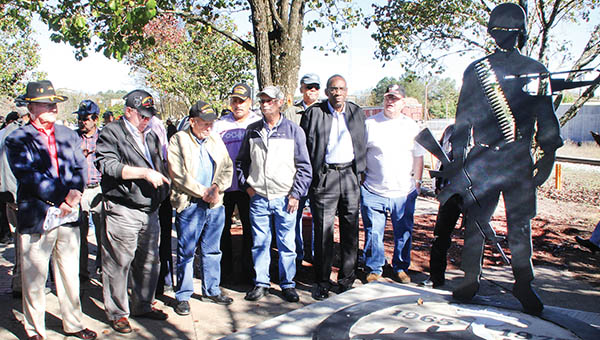 Vietnam veterans flank the new Vietnam Veterans Memorial that was dedicated Wednesday morning during a ceremony held at No Man’s Land Park in downtown Ahoskie. | Staff Photos by Cal Bryant

AHOSKIE – They came home as unwelcomed heroes from a controversial war. They were taunted; obscenities were hurled in their direction; and some were spit on.

It was the era of the Vietnam War, which American soldiers from all branches of the military entered 50 years ago. While that war eventually ended, the scars borne by those brave men remain today as emotional and mental anguish.

Those “wounds” went through a bit of a healing process here on Wednesday when local American Legion Post 102 hosted a Veterans Day event that included the formal unveiling of a Vietnam Veterans Memorial in No Man’s Land Park on Main Street.

Ahoskie Town Councilwoman Linda Blackburn explained how the new Vietnam Veterans Memorial came about, saying the town wanted to do something special on the 50th anniversary to the start of that war. 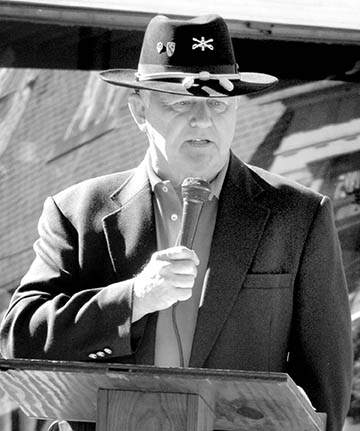 “The time was right to honor our brave Vietnam veterans with this memorial,” Blackburn said. “Times were difficult back then in our country. “Those veterans have their own memories of that time. I have special memories back then….as the mother of a six-month-old son at Fort Benning, Georgia and my husband fighting in Vietnam. I spent my days watching the TV news about what was going on in Vietnam and I’d pray that my husband would be safe. The TV also showed clips of all the anti-war campaigns here in America.”

Fast forwarding to today, Blackburn recalled a recent trip to Atlanta where she was in the airport, heading to baggage claim, when she heard people applauding.

“I saw some soldiers in front of me, in full uniform, and there was a group of older veterans applauding them,” she said. “That was touching to me as we have learned to honor those that serve us every day. But at the same time it made me remember when my husband came home and arrived at that same airport, he was spit on. No one clapped; no one said thank-you. What we’re doing here today with the dedication of this monument is to say thank you to our Vietnam veterans.”

Blackburn thanked Jim Messer of Roanoke-Chowan Community College and Eddie Kane Steel for their enormous contributions to make the memorial a reality. Blackburn said she and Messer met to develop the idea and after he drew out some rough sketches of the memorial, they took them to the local Vietnam Veterans Association in Ahoskie.

“They gave the final approval, but it was Jim’s vision of what you see here today,” she noted. “We got Eddie Kane Steel (located just outside of Ahoskie) involved. They donated the steel for the memorial and gave Jim access to their plant to cut out the design. This was a community project, to include the Town of Ahoskie.”

Will Sanders of Ahoskie was just an 18-year-old kid when he joined the U.S. Army in 1964. He later volunteered for paratrooper training at Fort Benning, assigned to the 82nd Airborne Division and pulled a tour of duty in the Dominion Republic and Vietnam, the latter serving as part of an air assault (helicopter) unit, earning the Air Medal, Combat Infantry Badge, and other citations. He is currently a member of Hertford County American Legion Post 102 and the local Vietnam Veterans Association.

“To be able to survive in Vietnam, it started long before I got there,” Sanders said. “It actually started when I was young and in the Cub Scouts. Back then everyone had a Daisy BB rifle and you were taught how to hit targets by windage and elevation. When I got to Vietnam those early lessons really paid off and thank God I survived and made it back home.”

He recalled the horrors of war….walking into a village where everyone had been slaughtered.

“It was impossible to get that image off your mind; that’s why some guys could not adjust and years later are still being affected by that,” he said.

He encouraged the youth of today to stick with education and make something of their lives.

“If you’re in school, stay there and continue to gain knowledge that you can put to good use, something to fall back on when you become an adult,” he stated.

“I’m not forgetting any of our brave military veterans on this day, but near to my heart are the Vietnam veterans,” Nance remarked. “Vietnam veterans knew what it was like, living in a war from hell at such a young age as the average age for our soldiers in Vietnam was 19….you quickly grew from a boy to a man.”

Nance called the Vietnam War the most turbulent event of the 20th century.

“Our families, our comrades, and our nation were forever changed…socially, politically and militarily,” he stressed. “We were in a conflict that remains very vivid in the minds of those veterans to this day. What they faced when they came home was, without question, another war to be fought. America was divided and the Vietnam veteran was caught in the middle of an ungrateful and, often times, a shameful America. Vietnam veterans are still suffering from the wounds of war today and we need to never forget their service and their sacrifice. We are a band of brothers.

“We (Vietnam veterans) vowed to never again allow generations of Americans go to war without the support they deserve,” Nance continued. “We recognize today’s veterans do in their service to our nation.”

Nance praised those involved in erecting a memorial in Ahoskie dedicated to those who served in Vietnam.

“Generations from now, this monument will support the raw courage and unyielding sacrifices those veterans made while fighting for their country,” Nance said. “But Vietnam veterans have already built a monument within themselves. You embraced an unlimited ability to focus on your duty to your country at a time when your country failed you in so many ways. Your duty to country never waivered, even under the worse times when you came home.”

Nance closed by encouraging all to support military veteran organizations in order to keep patriotism alive for the future.