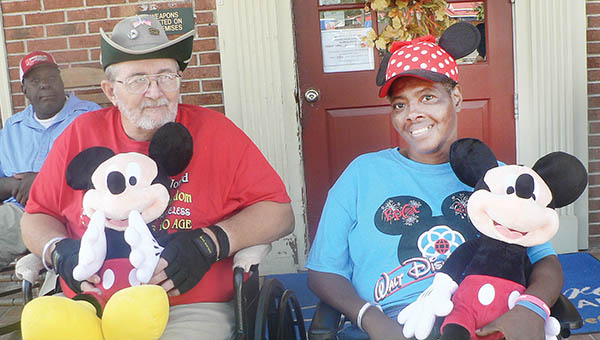 AHOSKIE – Fairy Tales do come true….and, yes, they can happen to you, if you’re young at heart. Fairy tales did come true for stakeholders.

Carolyn Pierce and Sharon Kelly and elders, Laverne Gatling and Herbert Yanke, all of Creekside Health and Rehabilitation Center of Ahoskie had the wonderful opportunity to enjoy the Magic Kingdom of Disney World together. 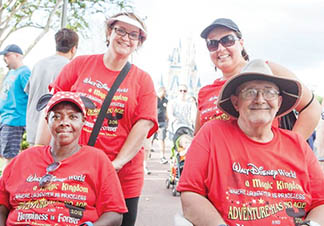 Laverne Gatling and Herbert Yanke (both seated) were taken on a tour of Disney World by their Creekside Health and Rehabilitation Center escorts, Carolyn Pierce (back left) and Kristi Jordan. | Contributed Photo

Supplemental funds were also contributed by local businesses that donated, an auction hosted by the Presbyterian Church, and proceeds raised by a plate sale at Creekside that was catered by Captain Bob’s Barbeque. Also, the therapy team at Creekside pooled their money together to purchase a $105 Disney gift card for each of the elders to enjoy. Creekside sincerely appreciates all who contributed.

The Ahoskie group was excitedly greeted at the Orlando airport by the Disney Xpress that took them to their hotel. From there they enjoyed many wonderful experiences, including the “Soarin Over California” hang gliding flight simulator. This was a virtual trip over the Golden Gate Bridge, the Redwood Forest, and the California orange groves.

“It was so real, you could even smell the redwood trees,” said Yanke of his experience.

They also rode the Spaceship Earth Ride, dined at a luau, and enjoyed nightly fireworks on the beach.

Yanke, a Vietnam war veteran, said his favorite thing on the trip was riding a train. He has been an avid train collector for years. He has trains in his room at Creekside because they remind him of a train ride he took from Chicago to Denver when he was a young man.

Gatling, a first time flier, was proud she had mustered the courage to fly to Disney World. She also enjoyed the “Country Bear Jamboree”, the fresh tropical fruit at the luau at Disney World, and the characters at Disney on Parade.

Everyone involved had a wonderful experience. Their fairy tales did come true.