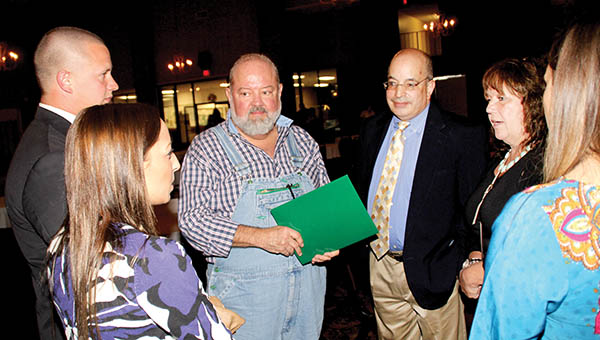 Glenn Cutler (third from left), guest speaker for the annual Ahoskie Chamber of Commerce banquet and one of the state’s “The Beer Guys,” tells admirers about microbreweries. The owner of Mug Shotz in downtown Ahoskie, Lou Velazquez (third from right) announced he has formed a microbrewery and will open a new restaurant in the spring featuring his own craft beers near Mug Shotz. | Staff Photos by Keith Hoggard

AHOSKIE – The Ahoskie Chamber of Commerce held its annual banquets and awards program Thursday night at the Ahoskie Inn.

Joe Murray welcomed the assembled guests to the event and launched the evening’s festivities.

A cast of characters who perform with the Gallery Theater performed a variety of show tunes for the audience. The performers were Tommy Hurdle (who also sang the National Anthem), Jill Gadsden, Erin Messer, and Madilyn Messer.

Following the meal, the Chamber Award, which is presented to members for going above and beyond the call of duty, was presented by Chamber President Joe Murray to his predecessor, Marshall Cherry, Chief Operating Officer of Roanoke Electric Cooperative.

Murray said Cherry holds a business administration degree, has served in the US Army Reserve, and has worked very hard to improve the lives of everyone living in the Ahoskie area.

Cherry thanked everyone for attending, giving a special shout-out to “the Roanoke Electric family.” 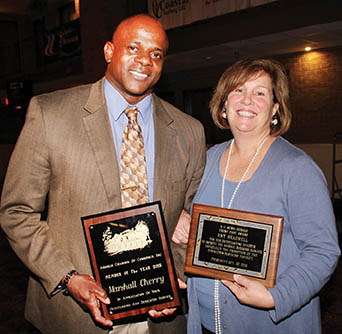 Snow said Braswell is an Ahoskie native who returned home after many years away. She is responsible for many beautification efforts in Ahoskie, including murals the downtown area.

“This is definitely a shock,” said Braswell. Although Braswell led the effort to make the annual meeting a success, Snow managed keep the secret that Braswell had won the News Herald’s highest award.

The speaker for the evening was Glenn Cutler, one of the two “NC Beer Guys.”

Cutler and his partner Dave Tollefsen travel across the state to look at and taste new craft brewery products. They have made many television appearances and are renowned for their expertise both on the taste of craft beers, and also how those beers are made in breweries.

Cutler said they are not critics because they are promoting North Carolina craft beer for the diversity and the economics for entrepreneurs.

“So if they’re not good,” he said, “you won’t see them on our website (www.ncbeerguys.com).”

He said drinking craft beer is different than drinking the big brewery beers.

“You don’t drink craft beer out of the bottle,” Cutler said. “You experience a craft beer by poring it into a glass and drinking it. What you’re looking for is the appearance of the beer, the aroma, the flavor, the mouth feel, and the intangibles and overall impression.”

He added that breweries come in many sizes, from some that just produce a few barrels to those that produce hundreds of barrels.

Craft brewers are experimental, using the crops produced here in North Carolina to make their beers stand out.

Cutler said brewers use sweet potatoes, pumpkins, and just about any edible fruit or vegetable the state produces.

It’s a good business, Cutler said. Some brewers just sell their product where it’s made, while some look for retail distributers.

“Just make sure you follow the law,” he said.

After Cutler finished, local businessman and Physicians Assistant Lou Velazquez, who won an award for his home-brewed beer, announced that will open a new pub and eatery in downtown Ahoskie that will feature his own craft beer.

He is currently the owner of Mug Shotz with his wife.