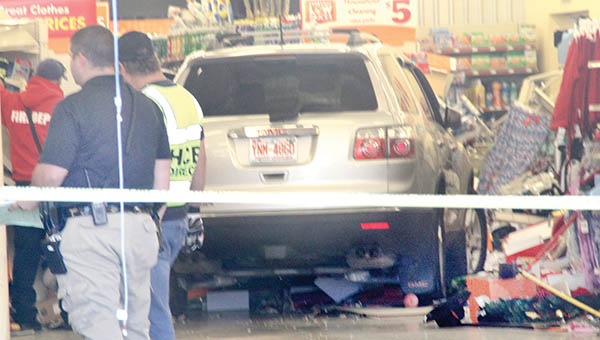 Above: This 2012 SUV traveled nearly 50 feet inside the Family Dollar store on Memorial Drive after crashing through the front door Saturday afternoon. Below: Damage is shown to the front door of the Ahoskie store. | Staff Photos by Cal Bryant

AHOSKIE – An Ahoskie man facing DWI charges, allegedly intoxicated at nearly four times over the limit, after he caused extensive damage to the new Family Dollar on Saturday afternoon by crashing his vehicle inside the store.

Despite the flying glass and toppled shelves and merchandise, fortunately no one was hurt inside the store.

Farmer’s report showed that Mitchell’s blood alcohol level, as administered by a NC Highway Patrol Trooper, was measured at .29. In North Carolina, a person is considered as intoxicated when their blood alcohol level reaches .08. 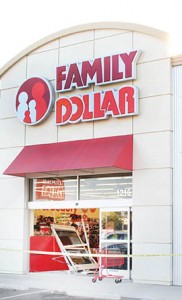 In his report, Farmer noted that Mitchell was operating a 2012 GMC Sports Utility Vehicle and was southbound on Memorial Drive (US 13) when it entered the Family Dollar parking lot. Mitchell steered the vehicle into a parking space at the front entrance of the store, and then crashed into the front door. The vehicle veered slightly to the right once inside the store and came to rest 49.8 feet from where it made contact with the front door.

Mitchell was not injured, nor was his passenger, Brenda Mabine of Maple Street, Ahoskie.

Along with the Ahoskie Police, emergency responders to the accident scene included the Ahoskie Fire Department and Hertford County EMS.

Once a pathway was cleared of debris inside the store, one of the emergency responders at the scene was able to safely back the vehicle out into the parking lot.

Ahoskie Police Chief Troy Fitzhugh said his office is waiting for an estimate of the damages to the store in order to complete the accident report.

The Roanoke-Chowan News-Herald attempted to gain information from an employee of the Ahoskie store on Monday, but they chose to make no comment.

The store remained closed as of noon on Monday. No information was made available as to when it will re-open.