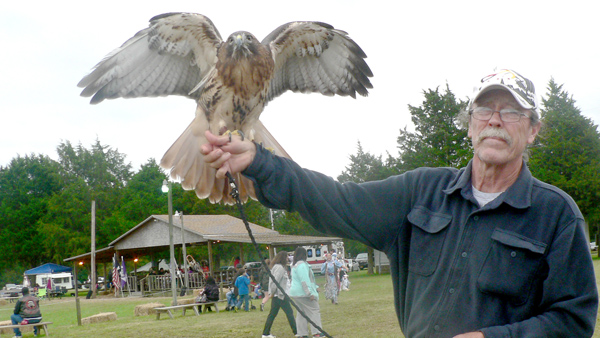 James “Two Hawks” Beamer displays “Wakon” – a 14 year old female red tail hawk who was found starving beside the road. Beamer, representing Sacred Friends Inc., was one of the many educational and informative vendors at the Meherrin Indian Pow Wow. Photo by Kim Bunch Hoggard

AHOSKIE – Mother Nature failed to cooperate a week ago, but the local Meherrin Indian Tribe remained steadfast in their effort to entertain and inform local citizens and visitors to Hertford County of their deeply entrenched roots.

The 2015 annual Meherrin Pow Wow was held this past weekend, delayed from Oct. 3-4 after nearly two weeks of persistent rain.

The postponement only served to heighten the sense of anticipation as the local Native Americans put on their usual display of beautiful and colorful regalia, accompanied by the beat of the “host drum.” 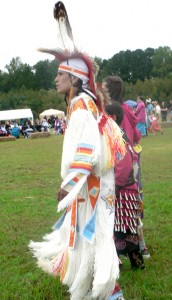 While the annual event details the rich history of the Meherrin Tribe, it also serves as an educational tool in other ways.

James “Two Hawks” Beamer, a representative of Sacred Friends Inc., was one of the many educational and informative vendors at the event.  Sacred Friends, Inc. is a nonprofit organization based in Norfolk, VA. They rescue orphaned, sick and injured wildlife and care for them.

Once the animals are rescued, volunteers take them into their homes and nurse them back to health if they are injured, or care for them for life if their condition is so severe they cannot be released back into the wild.  Their success rate is 95 percent for release. The organization has rescued rabbits, raccoons, squirrels, and hawks, to name a few.

Beamer had two red tailed hawks with him at the Meherrin Pow Wow. Wakon (which means sacred) is a 14 year old female red tail hawk who was found starving beside the road. She cannot be released back into the wild because of her acute arthritis. Leta (which means red) is an 11 year old male red tail hawk.  Leta was found injured after he flew into a live power line.  A portion of one of his wings had to be amputated leaving him unable to fly, meaning he cannot be released back into the wild.

When talking about the hawks to interested children passing by, Beamer shared a fact about the eye color of red tail hawks. He explained that the hawks are born with light gold eyes which turn darker as they age from juveniles to adults.  Older birds have dark brown eyes. Wakon’s eyes were much darker than Leta’s eyes.

“This is a good way to determine the age of a hawk,” Beamer said.

Sacred Friends, Inc. is hoping to start an educational wildlife refuge center in the Tidewater area that will house the animals.  All of the proceeds from the sale of their goods go to the care of the animals and a monetary fund that will be used to build the center.

The organization also takes the animals to Cub Scout meetings, hospitals, and rest homes providing reciprocal therapy for both the animals and people.