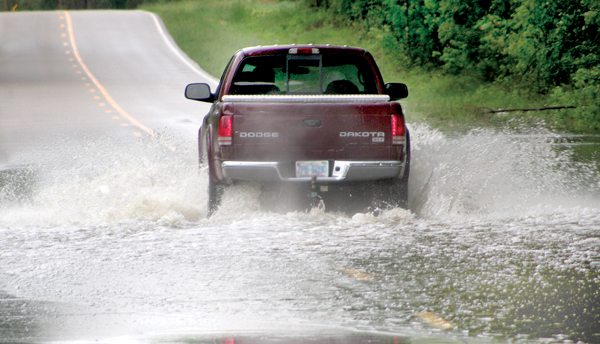 A pick-up truck throws up a small wake as it maneuvers through one of numerous locations in the Roanoke-Chowan area impacted by flooding associated with heavy rain that has fell across the region this week. Staff Photo by Cal Bryant

Be patient….the sun will shine again.

What appears to be even better news is that it appears Hurricane Joaquin will keep its high wind and heavy rain out in the Atlantic Ocean over the weekend. By Friday afternoon, the storm, packing winds of 130-mph, had finally began to trek north and the National Hurricane Center in Miami, Florida – based on its forecast models – expects it to move in a north-northeast direction over the weekend, staying away from the southeast coastline.

By the time Joaquin moves adjacent to the North Carolina coast overnight on Sunday into early Monday morning, the center of the forecast cone is expected to be 300 miles east of the Outer Banks. Winds at that time are predicted at 100 mph, meaning the immediate coastal area should experience a glancing blow from wind and rain, with some rain/wind bands creeping inland.

What’s in store for the Roanoke-Chowan area is more rain from another stalled out cold front…the identical scenario from last weekend.

“It’s call a cut-off low,” said Northampton County Emergency Management Director Ronnie Storey. “It made its way here on Thursday and then stalled out well south of us. It tapped into a lot of moisture out of the Gulf of Mexico and is dumping rain over Georgia, the Carolinas, and Virginia.

“We’ve been struck in this pattern now for the past two weeks,” Storey added. “But it’s finally going to break down and move on out, and I’m keeping my fingers crossed that we’ll see the sun again by early next week.”

Storey said the rainfall at his office in Jackson has amounted to 4.25 inches from Tuesday through Friday morning.

“I’m still expecting on-and-off rain showers and perhaps a pop-up heavy downpour every now and then through Saturday morning,” he noted. “We may see a break in the rain after that, and maybe the sun will try and peek through, but the forecast is calling for another round of rain on Sunday.

“We are not anticipating any impacts here from the hurricane,” Storey continued. “We still do expect some minor flooding, especially in the lowest lying areas of the county, but nothing on a major level. I would advise if you are out and about on our local roads, pay close attention to the possibility of ponding of water. Those can pop up at any time, especially after a big, brief downpour. Take it slow and easy through those areas.”

“We’ll receive around two, possibly three inches of precipitation up until about 9 or 10 tonight (Friday),” Smith said by telephone while inspecting an area in the northern portion of the county where standing water was reported. “Our flood risk is minimal, though there may be some flooding in low-lying areas and places that typically pond during every thunderstorm, but not particularly any major issues with flooding.”

With forecasters predicting as of Friday that the hurricane would not make landfall in the Carolinas, Smith said the uncertainly did not deter his office’s preparation.

“It’s offshore enough to where we should have minimal impact,” he surmised. “Sunday we may get some rain from one of those swiping bands, maybe up to two inches based on the movement of the track.”

As of the Friday afternoon briefing from state EMS officials in Raleigh, expected high winds could result in downed trees, thus a threat to power lines.

“With ground saturation up through the night, we could get up to 35 mile an hour gust the way that front is looking, an isolated tree may fall,” Smith said. “We haven’t had any reports (as of Friday) of road closures but there are a few places where the ditches are getting full; but these are the same places where they fill up any time there’s a strong storm surge that drops a lot of rain.”

Smith said his inspection Friday in the Como area yielded just some standing water in a low-lying area from a farm field that had spread across the roadway.

“As the moderation of the rain gets lighter (the water) has time to dissipate,” he maintained. “We try to keep an eye on Potecasi and Ahoskie Creek because they collect a lot of water, but based on the weather conditions, we don’t expect (those areas) to give us an issue.”

The National Hurricane Center puts out the reports by telephone that EMS personnel monitor, and they may become more infrequent for this area if forecasts of the hurricane’s track-path continue.

Of course, the shifting track may change a lot of the protective measures and actions that might be taken,” Smith concluded. “We’re not expecting a lot of other issues to arise.  People should keep current on weather conditions if you’re traveling and remember their (location’s) predictions are different from ours; so make sure you’re up to date on any changes.”

In Bertie County, Emergency Services Director Mitch Cooper was supervising the filling of sandbags on Friday afternoon as a precaution for flooding, primarily in the Windsor area.

“We’re trying to prepare if we have to do some dyking around some low-lying areas; especially for our governmental buildings to keep them secure and they can continue to operate” Cooper stated. “We think it’s mostly going to be a water event (in Bertie) and not a wind event, and that kind of puts it in one area.”

Tidal flooding in always a threat due to the rivers and Albemarle Sound that flank Bertie and Cooper said they were being monitored as a precaution.

“We’re not expecting any surge as far off the coast as the hurricane is,” he reiterated. “Our biggest concern is rainfall. Going into Monday we’ve got to get past the worst of it in the northernmost parts of our county. Depending on how the rain falls further inland dictates how our flood gauge and tracking will be determined.”

Cooper said as of late Friday afternoon his office had not received any reports of flooding.

Windsor Town Manager Allen Castelloe lauded the precautionary steps the county is taking with reference to his town.

“If we don’t get anymore (precipitation) than what we’ve received so far then we feel real good about it,” Castelloe said.

The Town Manager did say that most of the animals at LivermonPark and Zoo, located on York Street hard by the Cashie River, had been evacuated to Carolina Farm Center on Highway 308 north of the town as a precautionary step.

“That’s because in the past history has taught us this is easier to do,” he noted. “The animals are not stressed under the circumstances.”

Perhaps the most harrowing time for the zoo was in September of 1999 when Hurricane Floyd hit North Carolina. Though it moved quickly, the storm’s interaction with an approaching cold front produced heavy rains (17 inches) that led to an overflow of the nearby Cashie.  That flooding episode happened quickly and it happened practically overnight.

“We’ve done (this) evacuation just to be on the safe side,” Castelloe said.

Concern for low-lying businesses along with properties owned by the Town of Windsor has the town and the merchants taking precautions.

“Bunn’s Barbecue and Timberlands Unlimited are probably the lowest merchants that we have, and we would have to see right much more water to fall before that becomes an issue,” Castelloe warned.

Among the town’s public structures to be protected with sandbags if needed, Castelloe cited the Lawrence Memorial Library and the old Windsor Rescue Building on E. Dundee Street.

“They’re the two lowest places and I think they (Bertie EMS) are monitoring and would put down sandbags there if the conditions warranted,” Castelloe closed.