Conway: Home of the Brave 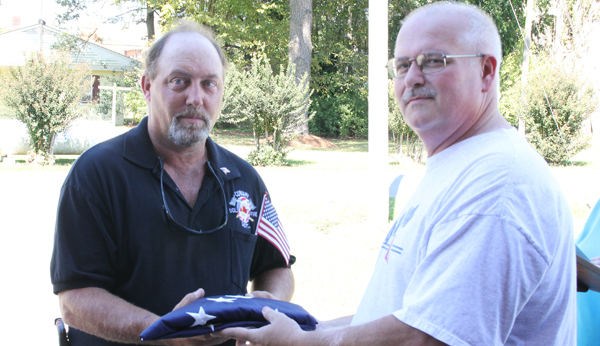 CONWAY – It looks like any other American Flag, flying its famed stars and stripes from the top of a shiny metal pole.

But for the proud members of the Conway Volunteer Fire Department, “Old Glory” on their property represents much more. It’s from underneath that flag from where their trucks roll when the alarm summons them to duty, each manned by brave firefighters who for 65 years have served their town, county, state and nation with the utmost respect for human life. 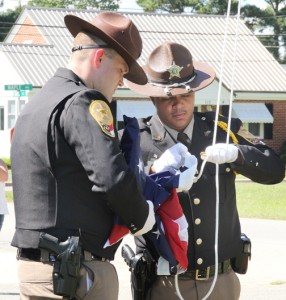 On Saturday, the flag at Conway VFD was once again waving in the breeze….only this time it was a new “Stars-and-Stripes” hoisted on an equally new flagpole.

Members of WoodmenLife Chapter 862 (Woodmen of the World) of Murfreesboro made the short drive to neighboring Conway and presented the new flag and pole during a 35-minute ceremony attended by Conway firefighters and town citizens.

JoAnn Nelson, president of Chapter 862, saluted the heroes that emerged in the aftermath of the Sept. 11, 2001 terrorist attacks on U.S. soil. She said other heroes walk the streets of Conway today, along with their brethren from every other small town and big city in America.

“Since 2002, WoodmenLife chapters across the country have been dedicating flagpoles and presenting flags, not only to honor the heroes and victims of Sept. 11, but also the men and women of our armed forces and to the men and women of this community of Conway who risk their lives to keep us safe,” Nelson remarked. “Police officers, firefighters, emergency rescue personnel, and other first responders, they all deserve our thanks and admiration. That one day back in 2001 made us all realize just how precious American freedom is. It’s never to be taken lightly.

“We can think of no more special way to honor these brave men and women than by the sight of the American Flag flying proudly,” Nelson continued. “Patriotism is at the core of WoodmenLife; it’s the fabric of who we are.”

She added that since 1947, WoodmenLife has presented more than 2.5 million flags to various organizations throughout the United States. They also sponsor annual American History Awards to those who excel in that subject.

Joe Barrett, who served the Conway VFD as its Chief for 17 years and remains an active member, was the featured speaker at the ceremony. He told the story of the Flag of the United States of America, born in 1777 with 13 stars and stripes to signify the 13 original colonies that joined to declare their independence from England.

“That flag represented a new nation, dedicated to the personal and religious liberty of mankind,” Barrett said. “Today, there are 50 stars, one for each sovereign state, in the greatest constitutional republic the world has ever known.”

Barrett went on to explain the colors chosen for the U.S. Flag….the red stripes for courage; the white for liberty; the blue representing loyalty and faith. He noted that on a daily basis, hundreds of thousands of U.S. citizens stand, place their hand over their heart and recite a pledge honoring “Old Glory.”

“Our flag is our titled deed to freedom for us to enjoy,” Barrett stated.

Conway Mayor Brian Bolton reminded those attending Saturday’s event of what the world saw on a fateful day in U.S. history – 9-11-2001.

“They saw what fire departments across our country go through to protect the citizens of their area,” Bolton said. “We’ve known for years what our brave men here at the Conway VFD do for our little town and the surrounding areas. We’ve got a great group of hard-working men and women. They’re volunteers. We’re appreciative of the job they do.”

Retired Conway firefighter L.G. Britt, a deacon at Conway Baptist Church, offered the invocation. In that prayer, he mentioned a dream shared 65 years ago by 25 men in the Conway community to start a fire department. 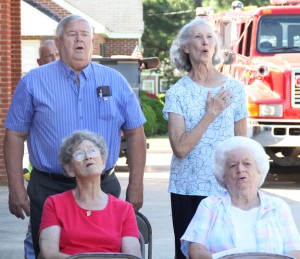 Saturday’s ceremony in Conway included audience participation by reciting the Pledge of Allegiance and the singing of the National Anthem. Staff Photo by Cal Bryant

“Through all the years that have passed, you (God) have guided them in the right direction; they are Godly men…they love their families, their community, and their fire department. They have been dedicated and have done a great job; making this department one of the best in the state. They have saved lives and done things to protect other families of our community,” Britt said in his prayer.

The new flag was presented to Conway VFD Chief Albert Vann by WoodmenLife Chapter 862 member Edward Nelson. It was then hoisted to full staff, and lowered to half-staff by members of the Northampton County Sheriff’s Office Color Guard.

Following a moment of silence for the victims and heroes of 9-11-01, those in attendance recited the Pledge of Allegiance and sang the National Anthem.

“We’re grateful that we live in the nation that we do, where there are men and women who are willing to put their lives on the line for others. As we run from a situation, they run to it. We thank them for their courage and sacrifice and bless this flag, may it always stand as a symbol for those willing to give all and to remind us that our freedom is not free, that we need to continue to stand up and fight for what is right and true, and stand behind those who are willing to stand in front of us and protect us on a daily basis,” Hill said in his prayer.