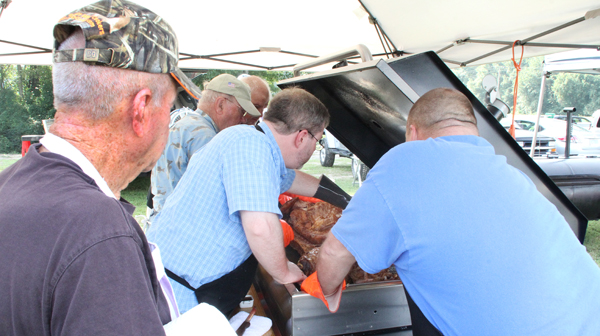 When the top chefs were announced here Saturday morning at the annual Backyard BBQ Contest, it shouldn’t have come as a surprise when Charlie Meeks of Newport walked slowly to the stage at the Ahoskie Amphitheater and was handed the first place trophy. It seems he’s become accustomed to making that walk after hearing his name called.

In the race for recognition as the best swine chef in the state, Meeks didn’t get the start he was hoping for….placing only twice (5th at the 37th annual Newport Pig Cookin’ Contest back in late March and winning the 32nd annual Pig Skin Pig Out in Greenville in mid April) in the first 10 events on the series.

But you can’t keep the “grandfather of swine” (Meeks is 79-years-old) down but for so long. His win in May at the R-C Pork Fest in Murfreesboro lit the fuse on a string of success. In the seven events he has entered since that time, Meeks has two wins, including Ahoskie, and a trio of second-place efforts.

“I gave it my best,” said a humbled Meeks after accepting his trophy and cash prize. “It wasn’t perfect, but the judges apparently liked it and they’re the ones you have to please.”

Unlike his championship effort in Murfreesboro four months ago where he cooked alone, Meeks had a helper in his corner in Ahoskie with his 18-year-old grandson, Charles Turnage, also of Newport.

“I’ve learned a lot from him when it comes to how to cook a pig,” said Turnage on Saturday morning while he and his grandfather awaited the arrival of the NC Pork Council certified judges to make their rounds to each of the cooking sites.

Meeks, who spent 37 years with the North Carolina Division of Prisons, retiring with the rank of Captain, began cooking competitively in the late 1980’s. He won a state championship in 2001 and is poised to repeat that effort 14 years later.

And if the 2015 state title does come his way he can look back at batting a perfect 1,000 in Hertford County with wins in both Ahoskie and Murfreesboro.

“I really enjoy coming up here to this part of the state; there’s some great hospitality up this way,” Meeks said as he strolled towards his pick up truck to load up. “And when you win up here it definitely makes the 120-mile trip home to Carteret County that much sweeter.”

All the pork cooked at the Backyard BBQ Contest was minced and served as sandwiches and plates as part of the annual Ahoskie Heritage Day event. Proceeds from the sale of the barbecue benefitted the Ahoskie Public Library Building Fund. 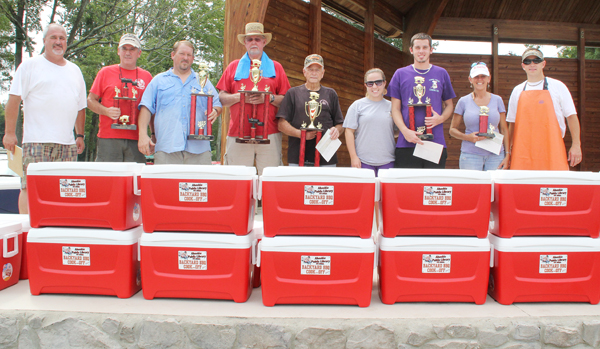