Who let the Bears out?

AHOSKIE – Under normal circumstances, people would prefer to view a bear from a safe distance or while the wild creature was caged behind sturdy steel bars.

However, thanks to the efforts of the Hertford County Football Boosters and local businesses, the bears have escaped their cage and are on the loose behind 1326 West First Street in Ahoskie.

“We wanted to offer the players something new and exciting to help motivate them and the crowd with an exciting entrance at home games,” said Emmy New, a member of the Football Boosters. “With our budget being small, we didn’t have a lot of options. So we turned to our community and were able to raise enough money to purchase the Bear Cage. It’s sponsored by Jernigan Oil & Duck Thru Stores, Vaughan’s Plumbing, North State Provisional, St. John’s Carts, The Jones Family, and Rusco.” 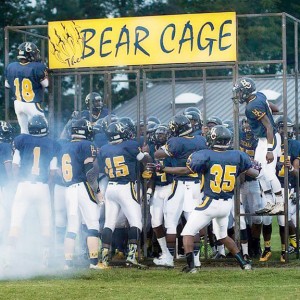 Members of the Hertford County High School varsity football team are poised to race out of the “Bear Cage” prior to the start of last Friday night’s home game. The cage is courtesy of several local businesses and the Hertford County Football Boosters. Photo by Gina Hoggard

As they take the field at home football games, the HCHS Bears first emerge from a giant cage.

New said the Hertford County Football Boosters was formed this summer to help organize fund raisers, supply meals and community involvement projects for the football team. In July they held a car wash at Advance Auto in Ahoskie and sold Krispy Kreme donuts.

“We kicked off our season on Aug. 8 with Pride In Your Stadium Day,” New said. “Players, football staff, family, and friends were invited. The Boosters wanted to get the stadium ready for Friday night lights. Everyone participated in cutting grass, pruning trees, replacing old trash barrels, and cleaning the field house. We also did some minor painting on the ticket booth, concession stand, posts in the parking lot, and other structures at the field. We ended the event with a pig picking and great fellowship. This was a great way show the boys and coaching staff that we all support them 100 percent.”

Also with the Boosters, HCHS head football coach Terrence Saxby, his staff and players have launched a “pay it forward” effort. On Sept. 4 they began collecting donations to be given to the Ronald McDonald House.

“After the season is complete, Coach Saxby and his players will make a trip to a local Ronald McDonald House to deliver donations, take a tour of the hospital and spend time with the children there. Please show your support by donating to this worthy cause. Please stop by the Boosters table during a home game to make your donation,” New stated.

During the holiday season, the Boosters and the HCHS team will be involved in two community projects. They will have a can food drive (donated to the local Food Bank) during Thanksgiving. For Christmas, they will be conducting a toy drive for children in need.

“If you would like to make a can food donation or a toy donation, you may bring those items to a home game and drop them off at our table,” New said.

Anyone is interested in becoming a Hertford County Football Booster can contact Shellie Saxby or Emmy New.