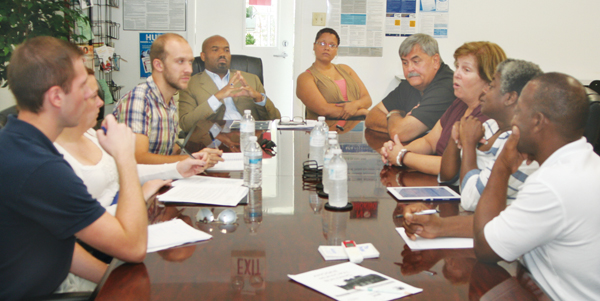 UNC Institute of Government students who will help oversee the re-development grant for the business incubator met last week with the Housing Authority, the Chamber of Commerce, and officials with the Town of Ahoskie. Staff Photo by Gene Motley

AHOSKIE – Hoping to spur a revitalization of its downtown business area, as well as promoting partnership development with stakeholders, entrepreneurs, and the creative establishment, the town of Ahoskie is partnering with the UNC Institute of Government in Chapel Hill and turning an old town landmark into a business incubator.

The Ahoskie Municipal Building, located at 301 W. Main St. was once the town’s fire station, police station, and most recently, used by Parks & Recreation for a Halloween haunted house, will be the start of what several downtown areas organizers hope will be targeted for re-development.

The first three stakeholders seeking to see re-investment and re-vitalization of the downtown area: the Ahoskie Housing Authority, Ahoskie Chamber of Commerce, and the Town of Ahoskie applied for a grant to assist in strategies for addressing this anticipated re-growth and re-branding.

Local stakeholders would like for the UNC students in City and Regional Planning to consider the option of converting the old municipal building into a small business incubator.  This would include examining the Ahoskie marketplace to determine the demand for such a facility as well as the feasibility of financing the rehabilitation. 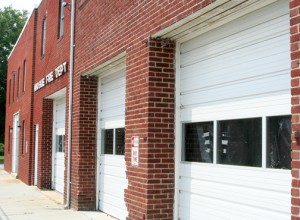 Ahoskie recently received a grant it will use to help convert the town-owned Municipal Building – its former Fire and Police Department headquarters – into a downtown business incubator. Staff Photo by Gene Motley

The three original stakeholders submitted a proposal and received a grant of $10,000 from the UNC School of Government.  The grant will allow the graduate students to perform various assessments, including market research and feasibility studies.  Later their participation will include implementation of the plan by attracting private and public investment at a minimal cost.

This past week, the three groups – the town, Chamber of Commerce, and the Housing Authority – met with the UNC students hoping to expand the vision.

“I called Tyler (Mulligan, professor at UNC-SOG) and after we were selected the students came down to get a better feel for the area,” said Housing Authority director Tyrone Lindsey. “They then met with Paul (Vaughan, Building Inspector) and got an analysis of the parcel of land.”

“The criteria was we had to submit something that the town owned, or a non-profit owned in order to qualify (for the grant), and this building is owned by the town,” said Chamber Vice-President Amy Braswell.

Lindsey said he hopes to aid the project by bringing in not only outside expertise, but also resources that can connect with the local stakeholders.

One such stakeholder, Brenda Board, a Philadelphia-based chef with Oliver and Company Tea Room; and who also has family ties to Ahoskie, attended the meeting.

“One of the things I envision is having occupants of so many of the empty buildings on Main Street and bringing foot traffic back,” Board said. “Another vision is a boutique hotel; another is a main street kitchen for guest chefs to come in while also inviting the community to participate.”

Braswell said that while the Ahoskie Historic District area, eight blocks that encompass the oldest portion of the town are targeted first, she hopes other districts – including the Atlantic District Fairgrounds on Holloman Avenue, which is a privately owned non-profit – can be included in future projects.

“Once we’re able to identify the different interests this can be a win-win for everybody,” said Lindsey. “If we can put this together and get financing from local stakeholders the likelihood of success is even greater.”

“Based on our plan, no one piece is going to do it, we have to pull them all together at the same time to make this work,” said Braswell.

Trevor Lobaugh, Sarah Kerns, and Tim Quinn were the UNC-SOG students attending the round-table; they inquired about an overall conceptual plan that could be used to guide the re-development.  While admitting there was no comprehensive plan, the group does say surveys and changes have been done.

“We did do a survey some years back when people started wanting to put apartments on Main Street,” said Fire Chief Ken Dilday. “The town did change the ordinance for zoning in the town’s central business district.”

Braswell pointed to the town’s recent enhancements: the new wastewater treatment plant, and grants that have allowed for the upgrading of the town’s parks and recreation areas.  But she still wants to keep the focus on re-development of the downtown area.

The Ahoskie group hopes the students and the IOG will help advise it on the next steps in the re-development process.

“We have to establish some re-development fund (from public and private sources) that we can use from within as well as what we hope to get from outside resources,” said Braswell.

“Eventually we want to get a plan,” said Lindsey. “But if we can see some short-term success, then in the long-term we can build on that.”

Student Trevor Lebough said one of the challenges will be finding someone to make the initial re-development investment once the incubator identifies what will work.

“One of the challenges will be whose going to be the first to start the investment to bring things in because there’s a lot of energy and there is risk,” Lebough said. “I can’t predict the results, but having stable financial institutions like the community college that come in first and commit says you would be moving in the right direction.”

The students said they would be analyzing in terms of property values as well as property use.  They will take their data back to the University and report back to this steering committee sometime during the month of November.

Following the meeting, Dilday took the student group as well as the stakeholders on a tour of the Municipal Building and explained some of its history, from the 1920’s when it was first built, renovations in the 1930’s and more in the‘60’s; and how during its history it has aided the town’s two prime public services (police and fire) since the town took over ownership in the 1950’s.