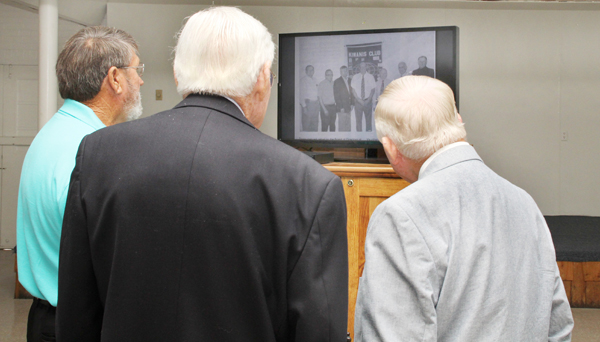 That sound marked the beginning of a gathering held by members of the Ahoskie Kiwanis Club. However, this one was a bit different than its predecessors as the club gathered on a special day to celebrate a special event – their 90th birthday.

Dot Newsome (left) and Margaret Wynn take a walk down memory lane as they view a scrapbook of Ahoskie Kiwanis Club memorabilia during Saturday’s 90th anniversary celebration. Newsome and Wynn were two of the original three women to join the club in 1993. Staff Photo by Cal Bryant

“It sometimes sounds like the tone of that bell goes on forever; that’s a good thing as it has been ringing for the past 90 years,” said the Rev. Dick Rice, the current president of the Ahoskie Kiwanians. “Thanks to all of you who have taken the time on a weekend to come out and celebrate this special day.”

But prior to the order of business at hand, Rice invited the audience to stand and follow Kiwanis tradition that marks the start of each and every meeting – singing “My Country Tis Of Thee, reciting the nation’s Pledge of Allegiance, and an opening prayer.

“We need to remember the legacy of those we stand upon here today,” the Rev. C. David Stackhouse, a Kiwanis member, offered in his prayer.

As part of the special celebration, Ahoskie Mayor Brien Lassiter presented Rice with a proclamation adopted by the Town Council in recognition of the local Kiwanis Club remaining steadfast in its effort to make Ahoskie and the surrounding communities a better place to live for the past 90 years.

“Like Kiwanis International, the Kiwanis Club of Ahoskie is devoted to improving our children and our community, by seeking the human and spiritual elements rather than the material values in life,” said Lassiter. “Kiwanis Club members promote the development of community leaders and positive role models, and opportunities for fellowship, personal growth, professional development, and community service.” 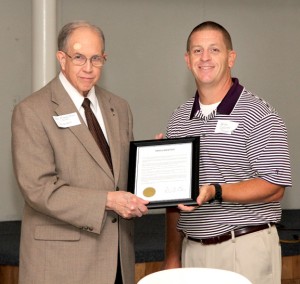 In honor of the Ahoskie Kiwanis Club’s 90 years of service to the community, Ahoskie Mayor Brien Lassiter (right) presents a proclamation on behalf of the Town Council to club president, the Rev. Dick Rice. Staff Photo by Cal Bryant

Lassiter noted that the first Kiwanis Club was founded in 1915 in Detroit, Michigan, meaning the organization is now in the midst of its centennial year.

“Club number 1402 was started here in Ahoskie in 1925 and celebrates its 90th anniversary this year,” the Mayor noted. “This club continues to have a positive impact on this community, providing meaningful services to our homes, schools and the community at large.”

Ahoskie Kiwanis Club member Kay Byrd recognized the current officers and members of the local civic organization as well as past presidents. Lauren Harrell and Nathan Askew, respectively the current president and vice president of the Key Club (the Ahoskie Kiwanians youth group), were also introduced.

Byrd also paid tribute to the first women to join the Ahoskie Kiwanis Club, making their entrance on Feb. 3 1993.

“We have two of those three here today – Margaret Winn and Dot Newsome – with the third being Sylvia Vaughan, my late mother,” Byrd said.

Jane Johnson of Edenton, Lt. Gov. Elect for Kiwanis Division 15 and 16, provided the keynote remarks at the 90th anniversary celebration. Johnson’s remarks centered on the values of the club and growing its membership.

“Joining Kiwanis is really just a simple process; all you need is a love of children and a willingness to work for their benefit, here locally and throughout the world,” she stressed. “Since joining the Kiwanis Club, I’ve had the opportunity to meet a lot of members, both dignitaries and worker bees. Among them I have found one common link, they’re all dedicated to Kiwanis and the organization’s objective of helping children throughout the world. We always need to bear in mind that Kiwanis is an international organization.” 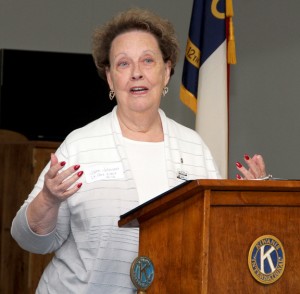 Worldwide, Johnson said Kiwanis led the effort and raised tens of millions of dollars to eliminate thyroid health issues that were linked to a lack of iodine in drinking water in third world countries. Another effort has been to eliminate tetanus throughout the world. To date, they have been 90 percent successful in completing that effort and have raised $100 million to fulfill their quest.

“We need to take the time to reach out and help the younger generation because they are the ones who will be running the world after we’re gone,” Johnson remarked. “Let’s take the time now to ensure they have a safe environment to live and grow. Our work in Kiwanis is not a social endeavor; it’s for the future betterment of our world.”

Johnson praised the Ahoskie Kiwanis Club for their involvement in building and maintaining an active Key Club, donating dictionaries to schoolchildren, awarding college scholarships and the Terrific Kids program (where a bicycle or a gift card is awarded at the end of the school year).

“These are all examples of volunteerism in action by this Kiwanis Club,” she said. “You also give to Kiwanis International which helps children and adults worldwide. I thank you all for what you do and congratulations on celebrating 90 years of service.” 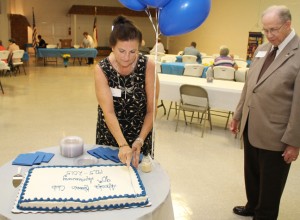 Spearheaded by an effort from Noah Garrett, the Ahoskie Kiwanis Club was chartered on July 6, 1925 – the date of its first official meeting. The 45 charter members were deemed as those of “above-average qualities and leadership abilities.” At that time the club was made up of civic-minded men from Ahoskie, Aulander, Colerain, Gatesville, Murfreesboro, Powellsville and Winton. Later, men from Roxobel and Woodland joined the club.

The club’s first president was the Rev. R.G.L. Edwards, a Methodist minister.

Nearly 100 men were members of the Ahoskie Kiwanis Club by 1956.

From its beginnings, the club started (and continues today) providing scholarships to local high school graduates to assist in furthering their education at the college level.

However, their love of children was not only confined to awarding scholarships. In 1940, land was purchased by the club on the banks of the Chowan River where Camp Kiwania was born. The camp was for the benefit of underprivileged children of the local area.

The local Kiwanians were responsible for selling over $750,000 worth of Government Bonds to help drive America to victory during World War II. They also spearheaded a scrap metal drive, collecting over 100,000 pounds that was used to build the nation’s military equipment.

In 1948, members of the Ahoskie Kiwanis Club jointly contributed in excess of $50,000 to help build Roanoke-ChowanHospital.

The causes may be different today, but the quest of the Ahoskie Kiwanis Club remains…..the golden bell still toils as they rally in support of their community, state, nation and world.