GREENSBORO — While investigators with the Greensboro Police Department search for a motive in the weekend murder here of an Ahoskie teen, those who knew Patrick Simmons remember him as a polite and studious young man.

Simmons, a 2014 graduate of Hertford County High School, was shot and killed shortly after 2 a.m. on Sunday, Aug. 30 in the parking lot of a Greensboro nightclub. 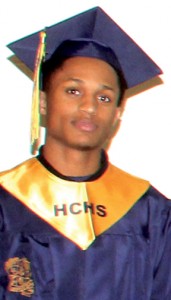 Patrick Simmons was a 2014 graduate of Hertford County High School.

Jermaine Marquel Couch, 19, of 704 Glendale Drive, Greensboro, stands charged with first-degree murder. According to the GreensboroNews & Record, Couch made his first appearance in Guilford County District Court on Monday afternoon. There, Judge Angela Fox denied bail for Couch and referred his case to the public defenders office, though his parents who attended Monday’s hearing said they planned to hire an attorney later.

“I’m just devastated at this news…my condolences to his family and I think our prayers should be with them at this time of their loss,” Parker said on Monday. “Patrick was a very special person; I taught him in middle school and found him to always be very respectful of others…this is such a tragedy.”

“I’ll always remember his big smile and how he was so full of joy and full of life; he was the kind of person who could walk into a room and light up the entire room,” Futrell said. “Patrick was always respectful, had good manners, and a wonderful sense of humor. He was one of our former football and basketball players here at Hertford County High School

“I was very proud to see him continue with a college career at Elizabeth City State. I want people to pray for his family, and our prayers are for them as well because he will be missed, and it such a shame he is no longer here,” Futrell added.

Simmons was just entering his sophomore year at Elizabeth City State University, where school officials said he was majoring in Pharmaceutical Science.

“The entire ECSU community grieves and extends our sympathy to the Simmons’ family and Patrick’s many friends on campus,” said a press release sent by the university on Monday morning.

“This was a young man who was doing things right in the world, who was out with his family and friends,” Richey told the News & Record.

The police report noted a large crowd of people were leaving Club Lotus, which is near the end of West Lewis Street off Elm Street, following last call. Couch and Simmons were among the crowd leaving the club about 2:15 a.m. Police are uncertain if the pair met inside the club before leaving.

The pair got into some type of disturbance, Richey said.

“We don’t know if it was between those two or somebody else,” Richey said. “Both of them were with other people.”

Officers were already in the parking lot and were heading toward the disturbance when Simmons was shot in the rail yard parking lot. Some officers began performing first aid while others talked to witnesses, police said. Simmons was taken by ambulance to Moses Cone Hospital where he was pronounced dead.

Couch was detained in the vehicle in which he was riding within a matter of minutes due to two things: witnesses willing to tell police what they saw, and the traffic pattern at the parking lot, Richey said.

“Officers created a traffic pattern so you can only go one way for safety because there’s no light to get out onto Elm Street,” Richey said.

Witnesses in the parking lot described the suspect and the vehicle he was in, Richey said.

“One officer stopped traffic and another went to the car (Couch was in),” Richey said. “He was arrested without incident.”

“This is a case of one individual that was upset, had a gun and shot somebody over something minor,” Richey said. “We don’t know the full motive.”

He said Simmons didn’t have a weapon with him, and neither Simmons nor Couch is believed to have had any alcohol inside the club.

“One person took another life,” Richey said. “An argument shouldn’t lead to a gunfight.”

An autopsy on Simmons was scheduled for Monday at the medical examiner’s office in Raleigh, Richey said.

Couch’s next court date is scheduled for Sept. 29.

The News & Record reported that Couch, prior to allegedly pulling the trigger, was already wanted for failure to appear on other charges that includes carrying a concealed gun, possession of marijuana with the intent to sell or deliver, conspiracy to sell marijuana and resisting a public officer.

His next court date on the murder charge is scheduled for Sept. 29.