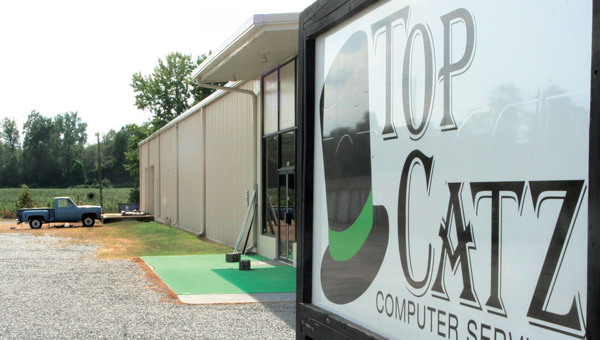 AHOSKIE – It looks like end-game for video parlor- sweepstakes businesses in the Roanoke-Chowan area as most such businesses are now gradually closing across the state.

The closings began after the first of this month when a deal was struck between software companies and the federal government two months ago.

Storefront sweepstakes “internet cafes” and “business centers” have proliferated here and elsewhere in recent years, despite efforts to outlaw them.

Internet cafes sprouted across the state after video poker games were banned in 2007. The businesses altered their computer software in an attempt to get around the state ban.

While there have been other attempts to close the parlors before, as of July 1 sweepstakes businesses in our state were told they must shut down if they get their software from any of the six companies that made a deal with federal prosecutors back in May in order to avoid prosecution. 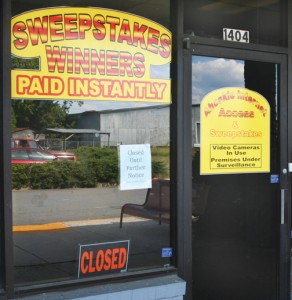 The Internet Café at 1404 E. Memorial Drive is among the Ahoskie video parlors that have closed since sweepstakes businesses were told to shut down or face possible prosecution. Staff Photo by Gene Motley

Sheriffs in every jurisdiction in the state have been told it’s up to the counties and district attorneys to prosecute sweepstakes cases, and it looks like in Hertford, Bertie, and Northampton counties that is what could take place.

Well, up to a point.

Officials are still trying to familiarize themselves with a law that isn’t as clear as the black and white on which it’s written.

“It’s been a continual issue for a number of years,” said N.C. Sheriffs’ Association Executive Vice-President and General Counsel Eddie Caldwell. “The courts have uniformly upheld North Carolina’s law as being constitutional; so many sheriffs have been able to eradicate those businesses from their communities.

“They’ve redesigned the machines, but they’ve consistently lost (in court) as the cases have gone up on appeal,” Caldwell added. “I’m sure they’ll keep trying, but the law is pretty clear and the courts have upheld it.”

Northampton County Sheriff Jack Smith says the two sweepstakes businesses in his county, one in Rich Square and the other in Gaston, are both in the process of removing the machines from their establishments.

Hertford County Sheriff Juan Vaughan said to his knowledge the video parlors in his county are no longer operational.

“My understanding is the ones we have are shut down,” said Vaughan.  “They would have had to shut down once we went in and investigated if there was some law that they were breaking.”

Caldwell said some of these investigations may present a challenge to some sheriff’s departments.

“The constitutionality isn’t a challenge anymore,” he said. “The real challenge for law enforcement is having somebody on their staff who has the time to learn how the machines operate.”

Caldwell added that many of the machines in the video parlors are dummy set-ups that are controlled by a machine out of state.

He says the Sheriff’s Association doesn’t keep a record of where these investigations have taken place around the state.  In one county he said letters were hand-delivered to parlor operators warning they had a certain amount of time in which to shut down their operation, or they would begin enforcing the law.

“From what I’ve been told, the sweepstakes operators then left the county,” Caldwell declared. “That’s been done in several counties around the state.

The General Counsel further stated that a cooperative effort is also needed between law enforcement and the jurisdiction’s District Attorney’s office.

“The people who are making all the money are not residents of Ahoskie, they’re people who are living away,” Caldwell declares. “The people locally are getting some money in rent for the building, and whoever’s operating the register or managing are being paid very well, though not like the owners are making. For these local folks they’ve got a lot more at stake.  They’re also at risk for being killed or injured and the person that’s making all the big money (is not).”

In District 6, District Attorney Valerie Asbell has met with Sheriffs Wes Tripp in Halifax and Smith in Northampton, but not the other law enforcement officials within the jurisdiction.  She stated in a call to her office that she would be issuing a definitive statement on her position early next week.

Also at stake are the privilege license fee amounts that some municipalities are receiving from such operations and the impact that revenue stream have on them.

Even though the businesses fall under the authority of the county, only municipalities would collect these types of fees.

But the General Assembly a year ago eliminated a municipality’s authority to levy privilege license taxes on local businesses.  The fees were paid in exchange for the “privilege” of doing business in a town or city.  Now the closings of the video parlors have phased out that revenue.

Hammond said none of the three Ahoskie businesses ever gave the town any trouble, and he hopes the cafes can re-open.

“Even if they come back we’re not going to get the $125,000 back because that fell under a privilege license issue and the General Assembly took away the ability for the town to collect privilege licenses as of July of this year,” he added. “So even if they do come back we’re not going to gain that revenue back that we’ve lost.”

Third arrest made in Woodland shooting