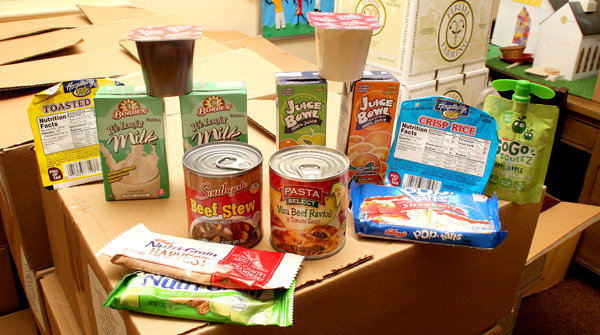 AHOSKIE – Since its founding decades ago, the Ahoskie Food Pantry has served as a lifeline for those in need.

And now, those of a much younger generation are experiencing the same generosity of the Pantry’s efforts.

Fresh off the conclusion of a program that helps feed hungry youth over the summer months, Ahoskie Food Pantry officials are gearing up for the fifth year of its successful Backpack Ministry. That effort provides as many as 150 meals over the weekends to qualified schoolchildren.

Bill Arrington of the Ahoskie Food Pantry said officials at Ahoskie Elementary, Bearfield Primary, Hertford County Middle, and Riverview Elementary identify the most needy children and gives him a total number of meals needed. The parents or guardian of each qualified student must sign a permission slip in order to enroll their child into the meals program offered through the Ahoskie Food Pantry. 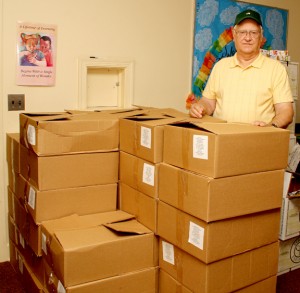 Food Pantry volunteer Bill Arrington stands with the boxes, each containing six bags of food items, that are ready to be delivered to four schools in Hertford County. Staff Photo by Cal Bryant

The meals are delivered on Thursdays, and school officials at all four sites distribute the bags to the students each Friday.

“It typically takes two to three weeks once school gets back in session to get our program up and running as we first have to wait for the schools to report just how many meals are needed,” Arrington noted.

He added that the meals come pre-packaged to the Ahoskie Food Pantry, which is based at First Presbyterian Church and supported by other local churches, from the Food Bank of the Albemarle.

“It still takes about four hours to sort through everything, as we go the extra mile to add a few items to each bag, to include pop tarts, pudding, and cereal bars,” Arrington said, adding that he has the support of three to five volunteers to assist in the Backpack Ministry program.

In addition to the “add-on” items, a typical food bag contains milk, juice, “heat-and-eat” cans of beef stew and pasta, and apple sauce.

Meanwhile, bi-partisan support on Capitol Hill in Washington, DC may play a key role in supporting the efforts of the Ahoskie organization, and thousands just like it across the nation.

The Hunger-Free Summer for Kids Act would give states more flexibility in how they reach hungry children with the food they need when school is out of session. Once implemented, this legislation could give as many as 6.5 million kids the chance to get the food they need during the summer months.

The news was well received by Arrington as the Ahoskie Food Pantry also conducts a Summer Backpack Program that helps feed local children in need while they are out of school over the summer months.

“This is very interesting news to hear; this could help subsidize our program,” said Arrington.

Arrington added that the Ahoskie Food Pantry just concluded its Summer Backpack Program, one that provided as many as 105 meals per week.

“What we’ve learned over the years is that school-age children in Hertford County so often go without a nutritious meal when school is not in session….basically that’s during the summer months and during the weekends,” he said. “Unfortunately for many of our young people from low income households, the meals they eat at school are the only nutrition they receive, and that only comes when school is in session. Our program fills the gap during weekends and the summer months.”

Summer is the hungriest time of year for many children from low-income families. Losing access to school meals for their kids puts added strain on already-tight budgets, and families are left making tough trade-offs. According to research, two-thirds of all low-income families say they’ve had to choose between food and utilities, two-thirds also had to choose between food and medical care.

Arrington said he just witnessed that same scenario this week.

“We had a real busy day on Tuesday of this week at the Food Pantry; most of those I talked to said they had spent their available cash on purchasing back-to-school supplies and had very little left to buy food; so they turned to us,” he stated.

Arrington added that donations of non-perishable food products as well as money are always needed.

“As is tradition, we receive a healthy dose of support to the pantry during the big holiday periods such as Thanksgiving and Christmas, but we can use support all year round,” he stressed. “That’s why it was good to hear what’s going on right now in Washington with this possible new legislation. While it only targets the summer months in getting food out to the youngsters in need, it will help our little program here in Ahoskie.”

The national summer meals program was created 40 years ago to help students get enough nutrition when school is out of session. When the program works well, it’s a lifeline. Today, however, the program just doesn’t reach a majority of kids in need; of the 22 million kids who receive a free or reduced-price school lunch, only 4 million are getting a summer meal.

The Hunger-Free Summer for Kids Act would help to change that. The bill would make it easier for states to reach low-income children in hard-to-reach places, such as rural communities or areas currently ineligible to host summer sites. For example, when accessing a summer meal site is difficult or impossible for children, it would provide the option to deliver meals or allow children to leave a site with a meal for later. In other circumstances, states would have the option to provide low-income families with a grocery store credit during the summer months to purchase nutritious foods, a model has been proven to reduce the most severe forms of childhood hunger by up to one-third.

“We’ve heard a lot of positive feedback about our Backpack Ministry. One teacher told us she could see the biggest difference in the attitude and work ethic of the students involved in the program, and that made us feel good about what we are doing here,” Arrington concluded.

To learn more about the Backpack Ministry or to make a donation to the Ahoskie Food Pantry, contact Arrington at 252-332-5267.