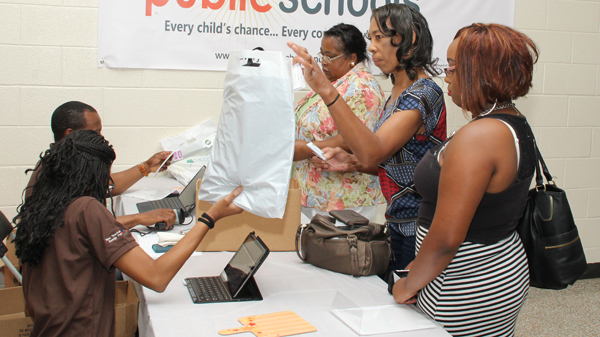 The lobby area of the Hertford County High School gym was a busy place Saturday morning as members of Roanoke Electric Cooperative checked in for their annual meeting. Staff Photo by Cal Bryant

AHOSKIE – The best definition of a contradiction of terms is to purchase a service from a company, only to have them tell you they do not want you to spend a lot of money.

Perhaps that type of thinking can be linked to a customer being part of a cooperative membership. 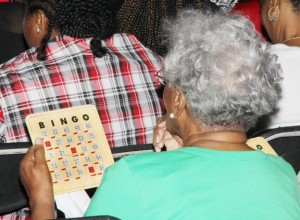 There were plenty of activities at REC’s annual meeting, including several rounds of BINGO where the winners were awarded prizes. Staff Photo by Cal Bryant

“Like any other business, we put our customers first,” said Wynn. “We feel the pain in their pocketbooks as they try to keep a handle on their family’s budget. We want your business; we want you to purchase your electrical power from us, but I dare to think of any other business that wants you to use less of its product, which in turn saves you money.”

Wynn’s main message on Saturday was an expansion of a series of “Straight Talk” forums conducted by REC.

“The Straight Talk series personally delivered the message to the membership that we are willing to listen and eager to respond to concerns about important pocketbook issues,” Wynn informed the huge crowd attending the annual meeting held at Hertford County High School. “We were able to directly communicate with nearly 500 members participating in the community forums, which took place throughout the co-op’s service territory from March to July. At each of the seven forums, co-op leaders shed light on their efforts to advance strategies to improve service and address rising energy costs.

“We went back to the basics, meeting face-to-face with our members to discuss the issues that are important to them,” Wynn added. “We went the extra mile to meet them where they are and engage in a dialogue with them. It turned out to be another very successful series of meetings.” 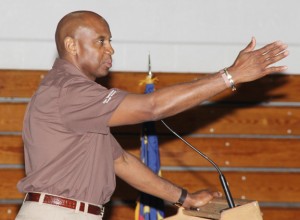 Roanoke Electric Cooperative President and CEO Curtis Wynn points out one of the multiple programs the co-op uses to save its members on the high cost of energy. Staff Photo by Cal Bryant

Wynn said the common theme heard at the forums was that the cost of electricity is too high.

“Most of our members see electric bills in the neighborhood of $200 per month or more,” Wynn noted. “The national average is 17 percent lower; so does that mean our rates are higher….the answer to that is actually no. We compare favorably, right at average, to other electrical providers in our area.”

A big factor in figuring the cost of electricity is how many households are served per mile of line.

The REC CEO also promoted the fact that the co-op pays its members for their investment. He noted at the last Straight Talk meeting held July 30 in Jackson, REC announced the retirement of nearly a half million dollars in capital credits. The refund comes as welcome news to the co-op’s membership, some of whom raised concerns about high electric bills, especially last winter.

“But still, your electric bill consumes a big share of your family’s monthly budget,” Wynn stated. “We are fully aware of that and we’re doing things that will hopefully help our members lower the cost of electricity. Our core values over the years have not changed and topping that list is members are first.”

Other than making every effort to lower the costs of providing electricity to its members, Wynn cited the following measures REC has in its plan to help members lower their energy bills:

Community Solar – Earlier this year, the co-op debuted a 100-kilowatt community solar garden, which allows members the option to purchase solar panels in return for a credit on their monthly electric bills. Forty-two of the available 360 panels, located at the co-op’s headquarters, have been sold to date. Members who participated in the Straight Talk forums are eligible for a discount if they purchase a panel. 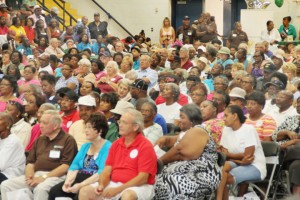 Upgrade the $ave – This program provides members with money to make energy-efficiency upgrades to their homes and businesses. Those upgrades are noted through an energy audit and a contractor is hired by REC to perform the work. Since there is no upfront capital required, this offering removes any financial barriers for those looking to save money and energy. The investment is paid back through a surcharge on their electric bill. The co-op has completed eight Upgrade to $ave projects to date.

Bright Savings – This ongoing initiative was launched to deploy more energy-efficient outdoor LED lights to all of the co-op’s consumer-members over the next two years. To date, more than 3,000 lights have been converted – accounting for nearly 50 percent of the outdoor lights on the co-op’s system.

Roanoke Connect – Engineering work is progressing, and construction plans are under way to build a fiber optic network. This $4 million project will enable the co-op to bring broadband technology to the area. Benefits also include the ability to improve outage management and reduce system losses.

As part of the annual meeting, REC members re-elected a trio of current co-op Directors – Carolyn Bradley of Jackson (District 3); Nat Riddick of Ahoskie (District 4); and Darnell E. Lee of Windsor (District 7). Each was elected to a three-year term.