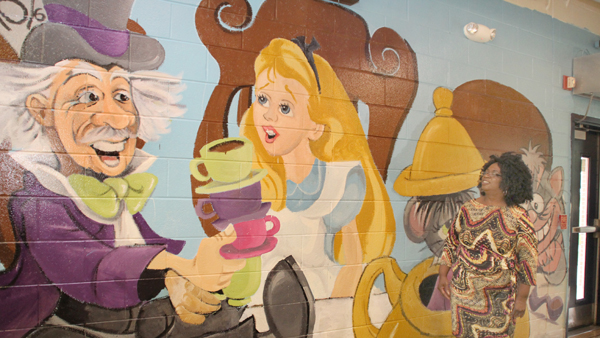 Ahoskie Elementary School art teacher Barbara Norman looks at some of her work inside the school’s cafeteria. An open house held Tuesday featured the artful transformation at the school, which opens Aug. 24 to students. Staff Photo by Cal Bryant

Warren, the principal at Ahoskie Elementary School, said he was “sick on his stomach” when viewing that listing, one that assigned his school an “F” in regards to the end of year test scores by AES students. 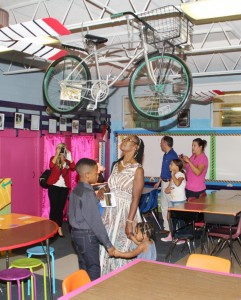 The new design work at each classroom at Ahoskie Elementary fits the teacher’s personal tastes. This one features a Wizard of Oz theme, complete with the flying bicycle of the “Wicked Witch of the East.” Staff Photo by Cal Bryant

He and his staff vowed then and there to do all they could to nurture and encourage their students in an effort to improve.

Five months later, there is a new look and a new attitude at Ahoskie Elementary, and when the students return next week for the first day of classes for the 2015-16 academic year they will notice a significant change in their surroundings.

The change is visual, but yet educational in concept by using an Alice in Wonderland theme, one where the students emerge from the proverbial rabbit hole in that fairy tale, they visualize, in a dream, all these new and exciting things.

On Tuesday, Warren and Assistant Principal Kim Scott led parents and community leaders through an open house that showcased the changes at Ahoskie Elementary.

“The thing that you have to understand in today’s world of education is that it’s tougher to hold a child’s attention because they have grown up in a world of electronic gadgets and not like you and me where we put pencil to paper each and every day,” Warren stressed. “There’s still a need for the pencil-to-paper, but we’ve learned that to make things interesting to the current generation of students you have to mix in visualization as well….so much to the point where learning is in some way linked to a video game. The design work you’ll see inside our classrooms today is like opening a door, or in this case with our overall theme, popping out of the proverbial rabbit hole and experiencing an exciting new world through visualization. We’re taking our students to a new level; we’re taking our staff to a new level.”

The transformation occurred on the heels of a visit made earlier by Scott and a group of nine AES teachers to the Ron Clark Academy in Atlanta, GA. The Academy is a model school with a vision to transform classrooms around the world by demonstrating transformative methods and techniques that are embraced and replicated everywhere. 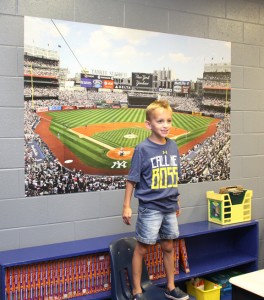 This youngster stands in front of a Yankee Stadium poster that covers a portion of one wall inside a sports-themed classroom. Staff Photo by Cal Bryant

“What we saw in Atlanta was a whole new learning environment; the students were up dancing, interacting; the students facilitated the class and the teacher was just there,” said Scott. “When we came back we had a transformation plan in mind and over the summer months that plan came alive. Our school has transformed into a magical place where we hope our students can grow and learn and become the 21st century leaders that we know they can be. We feel we have created a learning environment that will excite their senses.”

Scott added that the trip to Atlanta was coordinated through the Northeast Leadership Academy offered through NC State University.

“The demographics of his (Clark) students are just like ours here in Hertford County,” said Warren. “I feel if his students can do this, then ours can do it better.”

Upon the return of those teachers, the real work of transforming Ahoskie Elementary began.

“They came back from Atlanta with art design ideas in mind and our art teacher here, Barbara Norman, made it all come alive,” Warren said.

The castle painted on the outside wall of the school gym was completed in two days, according to Warren.

“We had her (Norman) up in the bucket (truck) and she painted the entire wall,” Warren noted.

Norman’s work on that wall as well as inside the school cafeteria – where the “Wonderland” theme really comes to life – trickled down to the AES teachers.

“Barbara inspired our teachers who, in turn, went into their individual classrooms this summer and put their ideas to work with paint and design,” Warren said.

Norman, who commutes to Ahoskie Elementary from her home in Chesapeake, VA, launched her artistic effort inside the school in June. The Norfolk State University grad smiled a lot on Tuesday as she was greeted by guests at the event who raved over her work.

“They gave me free reign with design,” she said. “I think it came out very well.”

“It’s a fun, safe environment, now with an added twist with an entirely new educational atmosphere with this design work; our classrooms have sprang to life with a mindset of making learning fun again,” Warren added. “It’s all aimed at improving this school academically. We certainly want to see the end result with an improvement in our letter grade from the state.”

The makeover includes allowing each teacher to specifically design their classroom to fit their individual taste.

“Their designs fit their individual personality,” Warren said. “When the students come back next week they’ll see anything and everything, to include a 70’s disco theme, the Wizard of Oz, a superhero theme, a jungle, flower garden, Yankee Stadium, rain forest, a Hollywood movie theme….all kinds of ideas that fit our teachers’ individual learning styles.”

A walk down each hall of the school revealed a wide assortment of designs, to include words of encouragement aimed at enticing the students to perform at the highest level they’re able to obtain. Some teachers have had the old-fashioned student desks removed from their classrooms, opting instead for tables where the youngsters can gather together to interact educationally.

“I was one of the teachers that went to the Ron Clark Academy; it was truly an experience I’ll never forget,” said Wilkins. “We were only there for two days….I wish we could have stayed longer and had an opportunity to learn and bring back additional ideas.”

She said one of the most intriguing bits of information shared at the Academy was Clark’s “55 Essentials.”

“They have a lot to do with proper etiquette; we have a lot of students here, through no fault of their own, that have not had the opportunity to learn simple etiquette,” Wilkins noted. “We need to instill those values in our children and when they learn these rules of life we’ll all be on the same page and will be able to make a push in the right direction academically.”

Warren was quick to point out that the teachers volunteered their free time over the summer vacation to prepare the classrooms for the arrival of students on Monday, Aug. 24. 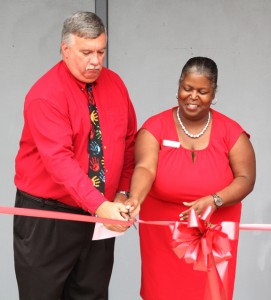 “I thank them for that,” Warren said. “They made it happen. They want to turn this school around academically just as badly as I do. And we, together, will do exactly that. This school will make a statement, and make it loud and clear, this year that our kids are just as gifted as those you can find in the urban schools in our state.”

The transformation also drew rave reviews from Dennis Deloatch, a member of the Hertford County Board of Education, and a former classroom teacher, school principal and superintendent.

“I’ve never seen anything like this; this is exciting and I can’t wait for Monday when the students here return for the first day of the new school year,” he said. “This is the type of out-of-the-box thinking that turns kids around. So often we, as teachers and administrators, think you have to use something big and bold to turn our students in the direction we want them to go. It’s not that, rather it’s the little things that help….what I saw inside that building today makes me believe that something as simple as art and design will open up these young minds to bigger and better things.”

“Not only does this turn this school around, it also turns the community around,” he stressed. “I’ve already heard parents talking about the upcoming school year, saying they were excited about the changes at Ahoskie Elementary. The community is buzzing over this change.”

“This isn’t a show; we’re serious about education here at Ahoskie Elementary and we’re making every attempt to make it easier and friendlier for our students,” Warren concluded.

The new look / new attitude begins in earnest on Monday at Ahoskie Elementary when the students set foot for the first time on the magical “red carpet” at the front entrance of the school.