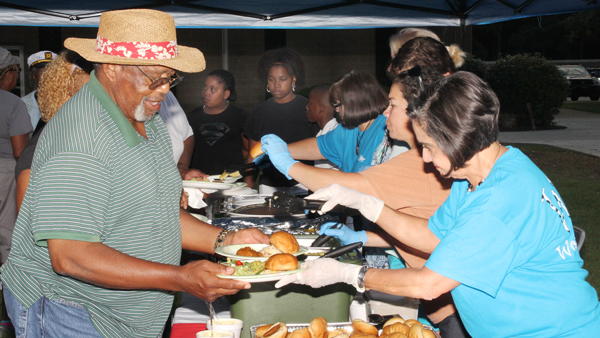 Locally grown products – to include butter beans, blueberries and ice cream – were part of the menu items served last week at the Farm to Table Community Picnic held on the lawn of Roanoke-Chowan Community College. Staff Photo by Cal Bryant

AHOSKIE – What better way to honor the agricultural heritage of a farming community other than to stage a picnic, complete with locally grown products.

On Thursday of last week, the Hertford County office of North Carolina Cooperative Extension Service did exactly that….welcoming over 130 individuals as they sat in the cool shade on the lawn of Roanoke-Chowan Community College.

The event, billed as the Farm to Table Community Picnic, served a dual purpose – a celebration of Community Health Center Week and to show appreciation to the farming community of Hertford County.

“Without our farmers we would not be able to eat and nourish our bodies,” said Stephanie Parker-Helmkamp, Director of the Hertford County office of North Carolina Cooperative Extension Service. 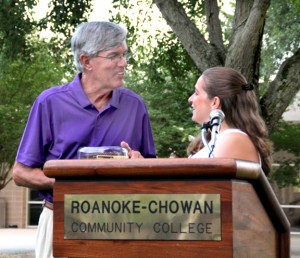 In honor of his 69th birthday on Aug. 13, Jimmy Mason, who served as one of the featured speakers at the Farm to Table Community Picnic, was presented a cake by Stephanie Parker-Helmkamp, Director of the Hertford County office of North Carolina Cooperative Extension Service. Staff Photo by Cal Bryant

She added that Cooperative Extension provides needed resources to serve its community through programs such as Food & Nutrition, Agriculture, and Youth Development (4-H).

“We’ll come out to you and provide programming to your church, group or organization,” Parker-Helmkamp said.

She also touted Cooperative Extension’s Voluntary Ag District program, an effort to encourage the promotion and preservation of farmland.

She thanked Roanoke-Chowan Community College for hosting the picnic.

Elam said RCCC plays a role in helping to shape the local community.

“We want to meet the emerging needs of our community,” he stressed. “Events like this are important; they help us stay in tune with the needs here locally. Community is a big part of a community college; we take that very seriously here as we play a big part in preparing the local workforce and helping them find jobs through education and training. A trained workforce helps our area attract new business, which means new employment opportunities.”

Those assembled enjoyed a locally sourced meal, to include butter beans (donated by Nantara Farms of Bertie County), mashed sweet potatoes, corn on the cob, and baked chicken. For dessert, homemade blueberry cobbler (blueberries were donated by Looking Back Farms of Perquimans County and Jo Anne Powell of Gates County) was covered with a scoop of homemade vanilla ice cream (courtesy of Wisdom Produce of Hertford County).

The meal was catered by Barbara Austin of Gates County.

“Agriculture has been in Hertford County longer than there has been a Hertford County,” said Mason, referencing the Native Americans that first settled locally along the banks of the Meherrin and Chowan rivers.

Carved out of the fertile soil of Bertie, Chowan and Northampton counties, HertfordCounty was founded in 1759. Early commerce in the county centered around Murfreesboro, Winton and Harrellsville, due to their respective locations on the rivers. Mason said steamboats navigating the local waterways would deliver goods and pick-up locally grown products. Most of the goods delivered locally were sold at the numerous “country stores” that dotted the Hertford County landscape at that time.

“Once the railroad began providing the prominent means of transportation, we saw Ahoskie and Cofield spring to life,” Mason noted. “Fertilizer was shipped in by rail, and the grain grown by local farmers was shipped out by rail.”

Mason said that through the years, trucking has become the major source of transporting agricultural supplies into the county as well as the means to start the process of delivering harvested crops (wheat, corn, soybeans) out of the local area to destinations throughout the world.

At age 69, Mason has also seen other major changes in agriculture.

“When I was young, my family used mules to farm,” he said. “I can remember using a pole at the end of the row as a way to guide the mule straight when planting a row. Now my tractors use self-steering by GPS.”

Mason, who marks his 45th year in farming in 2015, also noted how farming machinery has grown in size during his lifetime.

“As the size of the machines has grown, we’ve seen a decrease in the number of people it takes to farm the land,” he remarked. “When I moved back home in 1971 to take over our family farm, I farmed over 500 acres and there were 13 families working on that farm; not 13 individuals, but 13 entire families. Now I farm over 1,300 acres with three employees.”

That fact, he said, has led to the near demise of country stores and other agricultural related businesses that once thrived by serving these large “farming families.”

Mason said that farm employment declined by nearly 66 percent from 1980-2000. Meanwhile, the average farm size has increased from 339 acres to 587 acres.

While no longer on the scale it once was, Mason said tobacco help build Hertford County. He linked part of the growth of Ahoskie to it once serving as a major hub of tobacco trade.

Cotton was also an important part of the local agricultural economy. Mason noted the decline of that crop in the 1970’s due to the boll weevil. Now, due to an eradication program, the pesky weevil is no longer a huge threat and cotton again is booming.

“Nowadays, farmers contract their crops; we negotiate a deal in the spring with a company that wants your product; they tell you how many acres to grow and how much you’ll receive in return,” Mason said. 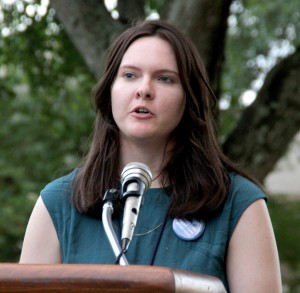 He also touched on the importance of preserving the land for generations to come.

“Soil conservation is very important; we take soil samples and based on what type of crop we plan to grow on that soil for that year, we are informed about how much nutrients we need to add to the soil,” Mason stated. “When I first started farming we would apply nutrients without knowing how much we really needed. What happened was there became too much phosphorous on the land, which then ran off into our local water supply. We now are very careful about applying nutrients to the land.”

“A lot of that has to do with the right infrastructure in place, helping us deliver the food directly where it’s needed,” Mason said. “There will always be a need for agriculture as we help to feed an ever growing population.”

Mason encouraged the public to make sure they understand today’s “lingo” such as organic and natural when it comes to purchasing commodities.

“We are seeing an increase in locally grown products being purchased locally and that’s a good sign,” Mason noted. “It’s healthy and nutritional and it helps the local economy.”

Also on the program was Erin Storie of Roanoke-Chowan Community Health Center’s Migrant and Seasonal Farm Worker Program. She noted that many of the 80 types of crops grown statewide, to include vegetables, are still harvested by hand, which requires farm workers. Others work at poultry and hog operations.

“We rank number six in the nation for the number of farm workers, approximately 150,000 are needed to harvest these crops each season,” Storie said.

In Hertford County, Storie said the number of migrant or seasonal farm workers varies between 1,000 and 3,000.

“These workers contribute to the local economy,” she stressed.

The biggest obstacle to overcome with the presence of migrant workers is the language barrier as Storie noted the majority are Spanish speaking individuals that are in the local area on work visas. That’s where RCCHC’s Migrant and Seasonal Farm Worker Program comes into play.

“We need to keep them healthy while they’re here,” Storie said. “As a federally qualified community health center, we can provide healthcare to those with limited access to healthcare. We have a bilingual staff and we can take a medical provider out to the field to see these workers on their own time…giving them healthy check-ups and vaccines.”

Those workers with serious medical issues can visit any one of RCCHC’s three offices in Ahoskie, Colerain and Murfreesboro.