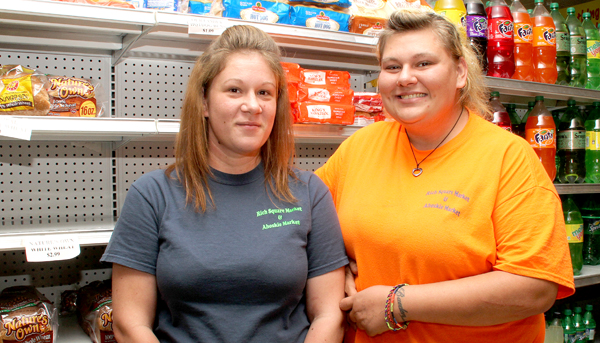 AHOSKIE – As the mother of 7 and 10-year-old boys, Ashley Lazzara faces the day-to-day duties of being a nurse, a doctor, and family therapist.

She has patched up cuts and scrapes – kissing many ‘boo-boos’ in the process; nursed her kids during the cold and flu season; and served as a personal chef, lifeguard, birthday planner, wardrobe stylist; barber, seamstress, chauffer, and classroom teacher.

And, magically, she still finds the time to be a hero to others.

A total stranger owes his life to this hard-working 31-year-old mother. On Thursday of last week, a man stumbled inside the front door of the Ahoskie Market – where Lazzara serves as a Shift Manager – and was visibly choking on something lodged in this throat. At that exact moment, Lazzara shifted into what she refers to as “mommy mode.”

“His eyes were bulging and I could tell he was having difficulty breathing,” Lazzara recalled of that fateful afternoon. “I immediately grabbed the phone and called 9-1-1 before going to his side to see what I could do to help.”

She remembered his voice being very hoarse when he uttered the word, “Heimlich” – referencing an abdominal thrust maneuver used when an individual is experiencing a hard time breathing because food or another object is blocking the throat or windpipe. A choking person’s airway may be blocked so that not enough oxygen reaches the lungs. Without oxygen, brain damage can occur in as little as four to six minutes. Rapid first aid for choking can save a person’s life.

“He wasn’t a big man…medium build; I could wrap my arms around him,” she said.

The only downside was that Lazzara had never before performed the Heimlich maneuver.

“I was panicking at that point, telling him I didn’t know how to do that, but I got behind him and wrapped my arms around him; he put my hands where they needed to go and together we pushed up on his upper abdomen,” she said. “It took about four good thrusts and he threw up.

“I guess I went straight into mommy mode,” she continued. “I’ve got two kids, and even though this person wasn’t a young child, all I could think about was doing whatever I could to help him. I guess it’s all instinctive reaction when you’re a mom.”

But the medical event was far from over.

Shortly after Lazzara went back to her job duties, the man re-entered the store.

“I thought everything was alright; he was outside and then came back in; he grabbed he, saying he still couldn’t breathe,” she stated. “He leaned over a trash can and made himself throw up while I was striking him on his back. That did the trick and whatever was left in his throat came out.”

While she never learned his name, Lazzara did come to realize what he was choking on.

“He apparently was eating some rice, while driving, and it became stuck in his throat,” she said. “He later told me that he didn’t know what to do, other than stop and seek help. I guess our driveway here at the Ahoskie Market was the first place he turned in to and I was the first person he saw once he came inside. He was just looking for help.”

After it was all over, Lazzara remembered, “crying and shaking all over.”

“I guess it took a few moments for it all to sink in….I recall thinking: what did I just do,” she recalled. “Other than sticking my finger down the throat of my oldest son, when he was smaller, because he was choking on a gummy, I’ve never done anything like this before.”

“It’s nothing I wouldn’t have done for anybody else, no matter if I knew them or not,” she remarked. “I’m a very giving person.”

What took place last week does not mark the first time Lazzara’s instinctive reaction has been put to the test. She told the story of shopping with her mother this past Christmas at Family Dollar in Murfreesboro.

“There was a little old lady trying to get a box off the top of a shelf; I stepped in to help and the next thing I realize is that I’m lying on the floor,” Lazzara recalled. “The box was heavier than I thought; I pushed the woman out of the way and the box hit me square in the head. I spent the next few hours in the emergency room at the hospital because my head was hurting so bad. I had suffered a concussion and was ordered to take it easy for a week.”

She also makes a habit of opening doors for those with their arms full of items, and assisting others, particularly the elderly, when she notices them walking out of a retail store with a basket full of items.

“That’s just me; that’s my nature….to help others,” she smiled. “Those I’ve helped have sometimes offered me tips, but I refuse. If that man that I helped who was choking comes back to this store and offers me money for doing what I did, I’ll politely refuse.

“What I did last week wasn’t for money; it wasn’t for fame; it was only because someone needed help. Frank made a big deal out if it….he gave me an extra week of vacation, but I didn’t do it for any type of reward,” she concluded.

“That’s the type of person she is,” said Timberlake. “She didn’t want any type of recognition from saving this man’s life. If she did the same thing tomorrow, or next month, or next year, she’d be the exact same. She’s the same person each and every day. She comes to work with a great attitude. Ashley is a great person, a great mother, and a great asset to our store there in Ahoskie.”

A native of Elizabeth City, Lazzara currently lives in Colerain. She was hired in May at Ahoskie Market, where her sister, Karie Roughton, is the store manager.

She has plenty of customer service experience in her short professional career – working at Taco Bell, McDonalds, and Family Foods in Gates.

“I was a shift manager at the McDonalds in Elizabeth City at age 18, so I have plenty of supervisory experience and it’s been that way at the jobs I’ve worked at,” said Lazzara, a 2002 graduate of Pasquotank County High School.

But the biggest experience she draws on in life is being a mom. And a local man can thank his lucky stars he chose Lazzara’s place of employment when seeking help last week.