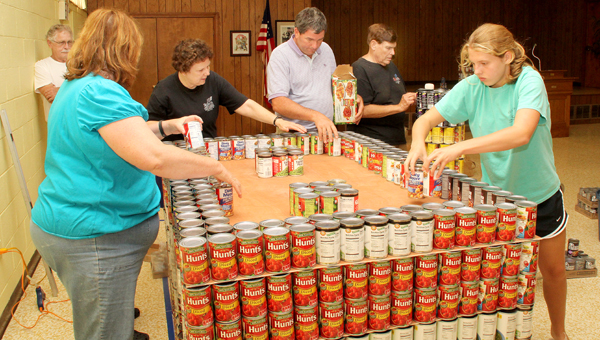 From left, Ahoskie United Methodist Church members Sally Barnes, Pat Bland, Richard Jernigan, Rodney Bland, and Cameron Basnight work as a team to position the cans of food that would later take the shape of a farm barn (as shown below, complete with an adjacent farm silo). Also shown in the photo is Jim White (leaning against the wall) who assisted with cutting sheets of wood used to stack the cans by the different levels of the barn. Staff Photos by Cal Bryant

AHOSKIE – Did you know that every 13 seconds a child dies somewhere in the world due to hunger related causes?

Were you aware that 842 million people in the world are undernourished? That number represents one-eight of the earth’s population.

Those facts weigh heavily on the mind and heart of the Rev. Bill Haddock, pastor of Ahoskie United Methodist Church. But instead of simply shaking his head in disbelief when staring at those numbers, he and his congregation decided to do something to help those who, due to financial hardships, are unable to help themselves. 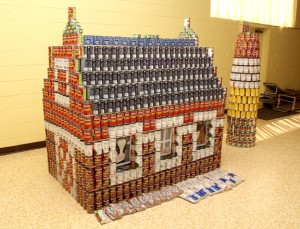 Launching a food drive, the Ahoskie UMC parishioners collected 2,200 cans of non-perishable food, which will find their way to the Ahoskie Food Pantry. But that’s not the entire story here as the local Methodists, along with members of other church congregations across the Roanoke-Chowan area, have long supported the Food Pantry. It’s what the Methodists opted to do with the cans prior to making a donation to the Food Pantry.

Using a design courtesy of canstruction.org, Ahoskie UMC members spent the better part of a full day last week building a miniature barn and farm silo from the donated cans of food. Each can was meticulously positioned, to include keeping the colored labels together in rows to add depth, starting from the floor up. For the barn, thinly cut sheets of wood were used between the different levels.

“We decided to do this in an effort to show our church members, and others, just how food insecure we are here in northeastern North Carolina,” said Rev. Haddock. “The cans in the barn and silo represent just a small portion of what is needed by the Food Bank of the Albemarle (the Elizabeth City based organization that serves the northeastern area of the state) to feed those in need.”

Haddock said that in 2014, “Canstruction” events worldwide (where over 1,200 structures were built) were responsible for donating in excess of 4.7 million pounds of food that was used to serve nearly 4 million meals to needy families. 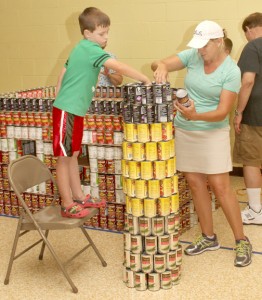 Gina Basnight and Thomas Nelson are shown placing cans of food on the farm silo, part of a “hunger awareness” project by members of Ahoskie United Methodist Church. Staff Photo by Cal Bryant

“There is a need right here in our little area,” Haddock said. “The Ahoskie Food Pantry and the Food Bank of the Albemarle are doing all they can to fill those needs. We had fun building our barn and silo, but on the serious side, what we accomplished was to raise awareness to those families in need here locally. We want to stop hunger in its tracks and ensure that those in need can go to bed at night without fighting the pains of hunger.”

The “canstruction” effort at Ahoskie UMC also serves another purpose.

“Once the word gets out on what we were able to do here, I hope it will challenge other churches, businesses and civic organizations to get involved with similar projects. In the end, when the cans come down, they all go to our local food pantry and then find their way to families in need,” Haddock remarked.

Canstruction® is a unique charity which hosts competitions, exhibitions and events showcasing colossal structures made out of full cans of food. After the structures are built, the cansculptures® go on display to the public as a giant art exhibition. At the end of the event, all food is donated to local hunger relief organizations.

Recognized for our commitment to innovation, hunger relief and collaboration, our work has helped raise nearly 30 million pounds of food since 1992.  Canstruction® events are held annually in over 150 cities around the world including North America, Australia, South America, Europe and Asia.

Canstruction has been featured on The Rachael Ray Show, CNN, and the Food Network.

For more information on how to get involved, visit www.canstruction.org.