“Hay-Day” at the Fairgrounds

AHOSKIE – A sparse, but spirited crowd didn’t let the July heat bother them as they turned out Saturday at the Atlantic District Fairgrounds off Holloman Ave. here for an afternoon of equine activities that began with horse-drawn wagon rides and all leading up to the Charles Williams Harness Race Matinee. 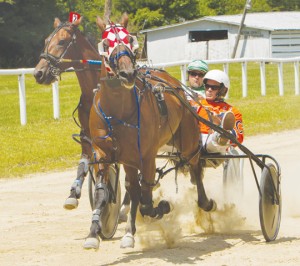 Gates opened shortly after noon and among the activities the horse-drawn wagon rides featuring nearly a dozen horse-drawn wagons, were a big hit with the youngsters who took turns riding around the ADF’s one-half mile track.   Wayne and Brenda Brown, who are among the horse-and-wagon owners who offer wagon rides during Ahoskie’s Heritage Days Festival in September, assisted with the jaunts consisting of a wagon ride around the Fairgrounds race track.

Following the wagon rides came the harness races.  The races, featuring horses racing at a specific gait (a trot or a pace) pulling a two-wheeled cart called a sulky.

Organizers had expected a dozen horses and sulkies, but instead only a trio of riders showed for the competition, but quite an impressive trio it was. “Vertiago Hanover”, owned by Henry Lewis of Loris, SC and driven by Elizabeth City native Dan Coker was the featured thoroughbred.  This three-year-old horse has won over $375,000 during his racing career.

“Vertiago Hanover” won both heats of the first race with a time of just under two minutes-and-eight seconds in the first heat and two minutes-seven seconds in the final and finishing heat.  The same two horses finished first-and-second in the second race.  Also featured was local harness driving legend, Charles “Charlie” Williams, for whom the race was named.  Williams and his horse, Swinging Jay, finished third in both races.

Total purse for the event was $1,000, sponsored by Jernigan Oil and Duck-Thru Stores.

Organizers say they hope to bring more racing back to the ADF race track in the near future.  The track is the only one outfitted for harness racing east of Raleigh.

What doesn’t kill you makes you stronger