Forward, together; not one step back 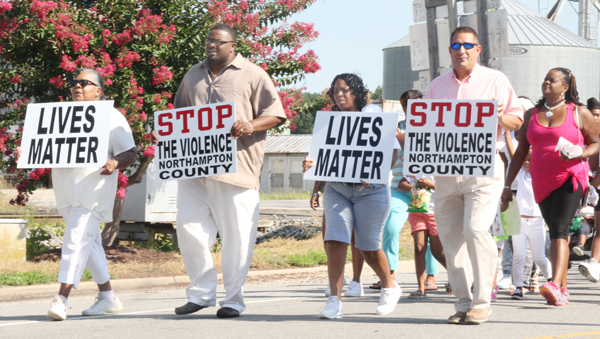 The Conway4Peace Rally & March held Sunday afternoon brought together local citizens from all walks of life as they joined together to take a stand against several recent acts of violence in the Northampton County town, to include a murder. Following a rally at the town’s Veterans Memorial Park, the crowd marched in peace, some carrying signs bearing messages to end the violence. Staff Photos by Cal Bryant

CONWAY – They carried their message to the street here Sunday afternoon.

Hopefully, those needing to hear that message were listening.

The Conway4Peace Rally & March attracted a crowd of 150-plus and those in attendance heard words of inspiration from a list of speakers before embarking on a peaceful march northward on Church Street (NC 35). 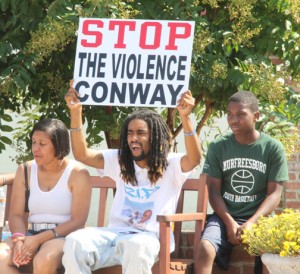 The rally and march comes on the heels of a murder, shots being fired into an occupied residence and vehicle, and fights in town. Most of the citizens say the problem is traced to those living at or visiting Conway Village Apartments, located on Woodard Blvd. off NC 35 North.

“I truly believe that this activity is the best way to show everyone that there’s strength in numbers,” said Conway Mayor Brian Bolton as he addressed the crowd gathered at the town’s Memorial Veterans Park. “My only regret is that we have to resort to this due to recent acts of violence in our community, to include a senseless loss of life. Having to deal with violent crime has taken its toll on our town and weigh heavy on our hearts.”

“Like minds, like visions, like goals,” said Baldwin, referencing the town wide support for the event. “The last few months have been troubling for all of us. But we’re starting a movement; today is our first step in stopping the violence.”

Northampton Sheriff Jack Smith pledged his support to the town.

“We encourage you here in Conway if you see any sort of suspicious activity or something you feel law enforcement needs to take a look at, I beg you to call our 9-1-1 Dispatch Center at 252-574-1041,” Smith said. “If it turns out to be nothing, then that’s okay, you did your part by calling and letting my deputies check it out. If we save just one life, it’s well worth it.”

“There’s nothing more important than our children; we want them to grow and mature and become our next generation of local leaders,” the Sheriff stated.

Tony Burnette, president of the Northampton NAACP, said the effort to come together as one will make a difference.

“If we stand and do nothing while people do bad things, then that encourages them to do more bad things,” Burnette stressed. “If we come together as one, it sends a message. We are sending that message just by being here today. Blacks and whites are coming together and you’re saying not in my neighborhood; not on my street; not near my kids. I encourage all of you to continue to stand up and stand together.”

Both of Northampton County’s elected officials to the North Carolina General Assembly – House Representative Michael Wray and State Senator Erica Smith-Ingram offered words of encouragement to Conway citizens in their fight vs. violence.

“It’s better to be proactive, and that’s what I’m seeing here today,” said Wray. “I’m committed through my office to offer you whatever resources are available. I’m going to reach out to (US) Congressman (G.K.) Butterfield to see if we get some federal dollars here. I will do what I can. Let’s walk the walk and save this community from violence.” 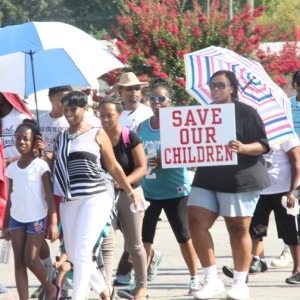 “Dr. (Martin Luther) King said there is nothing more dangerous than to build a society with a large segment of people who feel they have no stake in it; they feel they have nothing to lose,” Smith-Ingram said. “People who have a stake in their society, in their community, those are the ones that want to protect it. Those without that stake want to destroy it.

District Court Judge Teresa Freeman reminded those in attendance to remain diligent in an effort to protect public health and safety.

“I have never seen a town government act so quickly and so extensively to respond to acts of violence as the town of Conway has done,” Judge Freeman said. “The steps you took to declare a state of emergency and make an effort to hire more police officers and have a curfew (for children) is a lot more than larger towns have done.

“But the only way those governmental actions can be effective is that we, the law abiding citizens, do our part,” the Judge added. “What I would like to do is challenge the parents here to impose your own curfew. Your curfew can be earlier. We can take back this community by taking back our children. Adults need to be responsible for everyone in their household. That’s a way to help curb this violence.”

Dr. Franklin Williams, a local pastor, said the best way to allow evil to grow is for law abiding people to stand around and do nothing.

“This showing today lets our enemies know that we’re not going to stand around and do nothing,” Williams noted. “We will take this community back. Our voices will be heard and when I look out and see this crowd, I believe there is hope for this town and for this county.”

“There was a time when life meant so much more. We need to go back to that. We will stand together. Our town is not the place for shots in the night,” Baldwin concluded as he made his way to the starting point of the march.