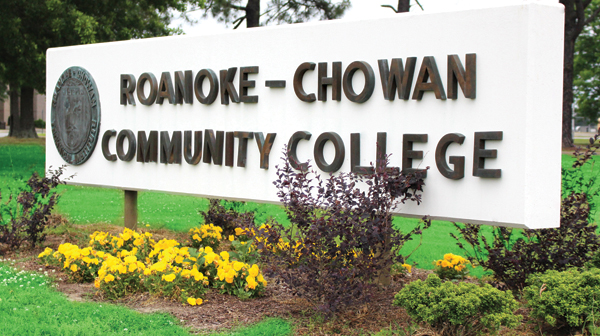 A study by Economic Modeling Specialists International revealed a $41.1 million impact by Roanoke-Chowan Community College on the local area.

AHOSKIE – Roanoke-ChowanCommunity College is a key driver to the economy in the Roanoke-Chowan region according to a first-ever statewide analysis of the impact of higher education on the state’s economy.

According to the study conducted by Economic Modeling Specialists International (EMSI), R-CCC delivered a solid return on investment for taxpayers during fiscal year 2012-13. State and local taxpayers spent $6.8 million to support the operations of R-CCC, which created an additional $41.1 million for the Roanoke-Chowan region – the equivalent of creating 1,042 new jobs.

“The economic value of Roanoke-Chowan Community College on our three county service area is significant. The study quantifies what many have believed for years. The tax dollars invested into R-CCC by state and local residents is yielding a significantly positive return that permeates throughout our society and the benefits manifest themselves in many ways. In addition, our commitment to the vision of becoming a world class education and training institution that meets the emerging needs of our community will increase that impact and the overall economic standing of northeast North Carolina,” said Dr. Michael Elam, R-CCC President.

R-CCC’s economic impact is three-fold: Business and industry rely on the production of skilled employees and the development of innovation and entrepreneurship; students and alumni benefit from higher lifetime wages; and the community realizes societal savings related to reduced crime, lower unemployment, and increased health and well-being.

According to the study, for every $1 that alumni invested in their education, they gained an additional $2.50 in additional wages. Thousands of R-CCC alumni are currently working in the Roanoke-Chowan region, cumulatively earning an additional $39.6 million in increased lifetime earnings. Their accumulated contribution to the regional workforce amounted to $33.9 million in income to the local economy. This alone is equivalent to creating 764 new jobs. Additionally, the added regional income generated from R-CCC’s payroll and operations spending amounted to $7.2 million.

The full text of the NC Community College report, along with statewide analysis, is available at http://www.nccommunity colleges.edu/emsi-study.

Roanoke-Chowan Community College was established in 1967 to serve the needs of individuals and businesses who reside in the surrounding communities.  Over the years, this institution has provided educational opportunities and training for individuals to meet the demands of the industries within the service area. For more information about R-CCC’s educational programs or to apply for admission, call (252) 862-1220.