AULANDER – What began as a traffic stop for speeding ended with an Ahoskie man behind bars for possession over five-plus pounds of marijuana. 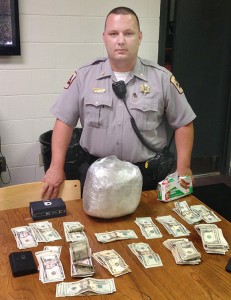 James Rashawn Dudley, 25 of Monaco Drive, was recently arrested for felony possession with intent to sell and deliver marijuana, felony maintaining a vehicle to keep a controlled substance and misdemeanor possession of drug paraphernalia. He was also cited for speeding (70 mph in a 55 mph zone) and for having an open container of alcohol inside the vehicle.

Hertford County Sheriff Juan Vaughan said that Deputy Chase Oliver was operating radar on NC 11 South near Hollowell Road when he clocked a vehicle at 70 mph traveling north on NC 11.

Upon making the traffic stop on the vehicle, Oliver said he approached the driver’s side window at which time he noted the “strong smell of marijuana.” 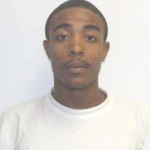 “I asked the driver, James Dudley, to step out of the vehicle,” Oliver stated in his report. “While speaking with Mr. Dudley I noted his breathing was increasing. I stated to him that I was going to search the vehicle because I could smell marijuana coming from the vehicle. I asked him if he had anything in the vehicle that I needed to know about and he stated, ‘yes, in my book bag’.”

Upon the arrival of HCSO Sheriff’s Captain Marty Davis, Oliver reported that he searched the vehicle, finding two open containers of beer, and a black book bag in the backseat containing a large quantity of marijuana (later determined to weigh 5 pounds, 11.8 ounces). Also discovered were a set of scales and a box of sandwich bags.

Oliver then searched Dudley and found a large amount of cash ($1,454) in his pockets. The drugs, paraphernalia, cash and the vehicle (a 2011 Chevrolet) were seized by the Sheriff’s Office subsequent to the arrest.

“You never know what you’ll run across, even when making what appears to be a simple traffic stop for speeding,” said Sheriff Vaughan. “Deputy Oliver’s training went far beyond what was obvious….the smell of marijuana coming from the vehicle. He witnessed an increased level of apprehension by the driver by noting an increase in his breathing pattern. That heightened my deputy’s senses to believe there was more here than just someone smoking marijuana and having a beer. Because of that, over five pounds of marijuana will not find its way into our community.”