CONWAY – The Friday morning shooting death of a 24-year old man in Conway has two men behind bars and law enforcement searching for two other suspects, on the run since 12:30 am Friday.

Shuntavius Vaughan of Conway was shot and killed at 305 Fields Drive at the Conway Village Apartments.  The Conway Police Department, the North Carolina State Bureau of Investigation and the Northampton County Sheriff’s Office have been investigating the crime.

Law enforcement are looking for Rumeal Daye, 24; and Akeem Robinson, 24, both of Conway. One of the original four suspects, 25-year-old Chenail Jordan, Jr., was arrested on Friday; while another Brandon Joyner, 24, of Conway, turned himself at around 12:30 p.m. Saturday. Both are currently being held in the Northampton County Jail without the opportunity of bond.

Jordan and Joyner both stand charged with first degree murder, attempted murder, assault with a deadly weapon with intent to kill, shooting into an occupied dwelling, and possession of firearm by a felon. Warrants have been drawn for the same charges against Daye and Robinson.

Law enforcement is asking the community to assist in locating the two at-large suspects, who are believed to be armed and dangerous. 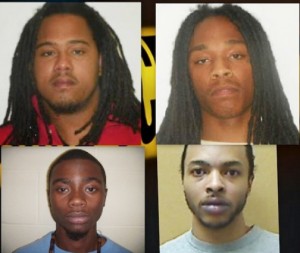