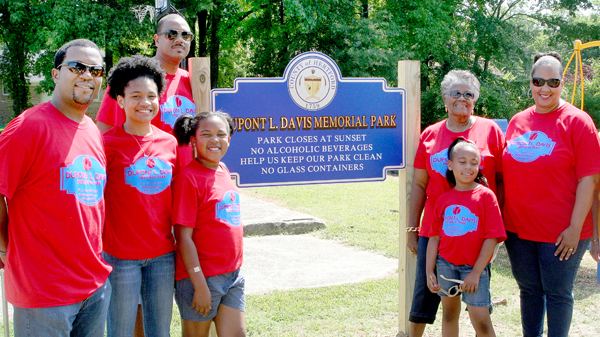 AHOSKIE – It was the kind of occasion Dupont Davis would have loved; but he would have been modest about it.

The long-time Hertford County Commissioner, and former chairman, who passed away unexpectedly in 2010 and served the county for over 21 years, had a recreational park dedicated in his name here Saturday morning. 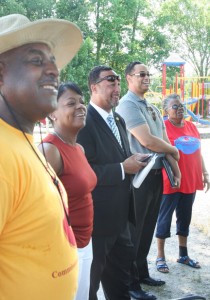 The park is located just off Holloman Avenue and Martin Luther King Drive at the old Robert L. Vann School, and situated only a couple of blocks removed from Dupont’s former residence.

Though it is located within the town limits, the park was built, and will be maintained, by the county.  For now the park contains playground equipment, picnic tables, and a large open space for anything from a ball field to a horseshoe pit to a badminton court; but the facility will be making additions with time.

Bill Mitchell, chairman of the Hertford County Board of Commissioners welcomed a crowd of some thirty people who turned out in the June heat for the dedication.  This greeting was followed by a short list of Davis’ accomplishments from his two decades in county government.

“From Freddie Hall Park, to Futrell Park, to Cooper Park and now, Davis Park, Dupont was somebody who made big contributions to the county,” said Commissioner Ronald Gatling, who is also chairman of the Hertford County Recreation Board.

Members of the Davis family, led by his widow, Earlene, son, Dexter, and daughter Dedria, attended the dedication ceremony. Davis’ other children, son, Derrick, and daughter, Donica, were unable to attend. All the Davis family members were dressed in either red or gold colored T-shirts, adorned on the front with a photograph of Dupont. 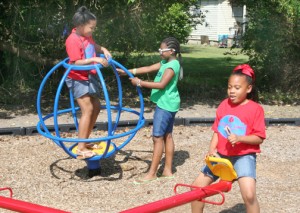 A group of youngsters play at the playground located at Dupont Davis Park near Holloman Ave. and Martin Luther King Drive. Staff Photo by Gene Motley

“He was like a father to me,” Hunter added, “the first person I’d always call because I knew if you needed something done, it wouldn’t go far without the touch of Dupont Davis.”

Davis was first elected to the Board of Commissioners in 1988.

“From his earliest days in politics, first with the Masons and the NAACP, when you serve 20-some years, you make an impact,” Hunter concluded. “Dupont was prepared for politics; and these helped prepare him for a lifelong career in Hertford County politics.”

Farmer, who held the longest tenure in office serving with Davis of the current commissioners, then read a resolution dedicating the park.

Earlene Davis then thanked everyone who attended, recognized attending family members, and finally – along with her son, Dexter, pulled the cord to reveal the plaque that will stand at the park’s entrance.  A second plaque will be visible from MLK Drive.

Following the dedication program, a special brunch was served at nearby Catherine’s Restaurant.