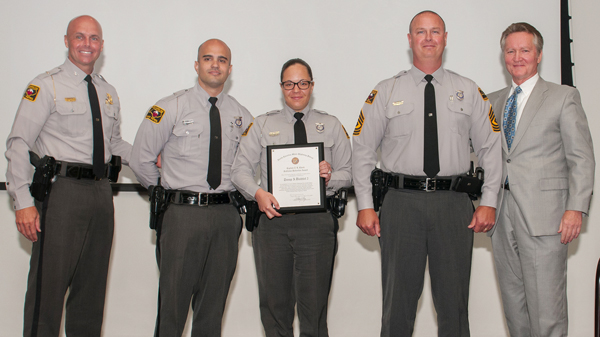 AHOSKIE – Upon being made aware that his office would be honored with a statewide award for reducing the number of motor vehicle accidents on local roads, Mike Warren said he wondered out loud, “why would they select us?”

Warren, who serves as the First Sergeant of the North Carolina Highway Patrol’s Troop A / District 2 office in Ahoskie, knew in his heart that the number of accidents worked by he and his staff in Bertie, Gates and Hertford counties was, in his opinion, “way too many.”

However, the numbers do not lie.

For that effort, the Troop A / District 2 office was honored with the Tommy Cheek Collision Reduction Award. That award is given to the Highway Patrol district that has the overall largest percent decrease in reportable collisions over the previous year.

The award was part of an annual ceremony held in Raleigh where the North Carolina Department of Public Safety recognizes individual and team achievements of the State Highway Patrol. Colonel Bill Grey, commander of the North Carolina State Highway Patrol, and Frank L. Perry, Secretary of the Department of Public Safety, presented the awards at the NCHP’s Training Academy in Raleigh.

For Warren, earning such recognition from his peers is gratifying, even though he admits there were still over 1,100 wrecks within the three-county district last year.

“That’s still way too many,” he said. “But then I stop and think about the accidents that occur each and every year where the driver doesn’t bear the brunt of the blame….accidents involving animals, especially ones with deer, which are plentiful in our area, and weather-related accidents. We’ve had more of the latter over the past couple of years due to experiencing an above average number of winter storms that have produced snow and ice.”

Warren passed the praise to the NCHP Troopers assigned to the Ahoskie office.

“I’m very proud of the work that our troopers do; they’re the ones out there every day trying to make our roads safe,” he stressed. “Their efforts are the reason that Troop A / District 2 was recognized with this award. Award or no award, that’s the same type of effort we will continue to do each and every day.”

Two of his Troopers – A.S. Genao and K.R. Genao – accompanied Warren to Raleigh to accept the award, one named in honor of the late Highway Patrol Captain Tommy Cheek, who died of a heart attack in December 1999. Cheek was one of the Patrol’s earliest proponents of using traffic crash data to target high collision corridors.

Warren added that during the 2013-14 time frame, the NCHP’s Ahoskie office was short-handed, working with only eight Troopers.

“We’re supposed to have 15, and we’re getting back closer to that number now, but for the time period where we were able to lower the number of accidents here, we only had eight Troopers,” he said.

Warren said for the current year, Troop A / District 2’s accident numbers are below the 2014 stats.

“Our numbers are down for the first quarter of 2015; we want to maintain that effort,” Warren concluded.