AULANDER – Next stop: the Rogers Centre, but that may take a while.

Former Hertford County High and Chowan University baseball player Tyler Burden is off to Dunedin, FL where he will sign his pro baseball contract with the Toronto Blue Jays.

The same day he proposed to his fiancé. 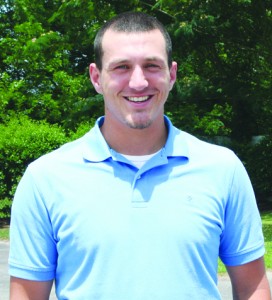 After being selected in the MLB Draft, Tyler Burden will sign with the Toronto Blue Jays and will hopefully begin the short-summer season with the minor league Bluefield Blue Jays in West Virginia. Staff Photo by Gene Motley

Prior to the draft, Burden had worked out for Atlanta, the Chicago Cubs, San Diego, as well as Toronto.

While it may take a year, or so, before Burden is on the mound in the Canadian capital city; he’s ready to put in the time, and the work, to get there.

“I’m going in as a pitcher,” he said in an interview before flying to the Sunshine State. “I’ve heard a few teams would like me as a starter, a few want short relief; I’ll find out when I get there.”

On the mound his junior year at Chowan, Burden tallied 23 strikeouts in 20 innings of work.  He ended the season 2-2 with 17 appearances and a 4.05 earned run average.  Burden led the Hawks and the CIAA with five saves on the year.  He tallied 51 strikeouts in 48 career innings pitched.

At the plate, the 2015 All-CIAA First Team honoree and NCBWA All-Region First Team member posted a .407 batting average, tallying 59 hits in 145 at-bats.  He notched 11 doubles, a team-high six triples and belted eight home runs for 39 RBI and a perfect 19-19 in stolen base attempts.

Burden hopes to begin the short-summer season with the Bluefield Blue Jays in West Virginia; and with a successful campaign in the Appalachian League he could end the summer out west with the Vancouver (CAN) Canadians.

A touted prospect out of high school, Burden hopes his efforts are an inspiration to others who will follow.

“It feels good,” he beamed. “It gives guys here hope that it can happen.  They can now push for something; maybe to even be better than I was.”