MERRY HILL – With over 260 wins, six consecutive state championships, 11 conference championships, and well over a dozen players sent on to college baseball programs, Robert Kravitz is leaving Lawrence Academy for Arendell Parrott Academy in Kinston where he will become assistant athletic director and assistant baseball coach.

Kravitz-coached Warrior baseball teams have dominated the Tarheel Independent Conference for more than a decade, winning their most recent tournament and regular-season crown this past May. 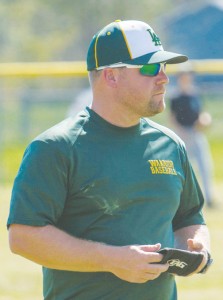 In a telephone interview, Kravitz said it was the toughest decision he’s ever had to make in his professional life.

“I’m truly grateful for all the support and guidance from the Lawrence Academy family,” he said. “The past 11 years have been great and I couldn’t have asked for a better place to start my teaching and coaching career.”

A native of Virginia Beach, Kravitz moved south as a teen and graduated from Bertie High in 1999 where he played football and was an All Big-8 baseball selection at centerfield and shortstop playing for coach Randy Whitaker.

Kravitz then spent four seasons at Elizabeth City State where he was an All-CIAA catcher and team Most-Valuable-Player his senior year of 2003.   In 2002, Kravitz was voted All-Tournament when the Vikings played in a tournament at Florida Memorial University in Miami Gardens, FL.

He later played minor league baseball in the Frontier League with the Florence Freedom in Kentucky, right across the river from Cincinnati.

Fresh from college, Kravitz – a Health & Physical Education major at ECSU – was hired first as an assistant under Whitaker back at Bertie for one season and then became junior varsity basketball and varsity baseball coach at Lawrence in 2004, in addition to teaching Health and Science and P.E.

Kravitz’ first Warrior baseball squad finished 20-7 and was runner-up in the state championship series to Waccamaw Academy.  The Warriors were a ‘bridesmaid’ for two more seasons, losing to Waccamaw again and Wayne Country Day before his 2008 team began a six-year odyssey of title wins.

Lawrence won state championships from 2008-to-2013, during which time the Warriors had several all-state selections.

“If I began naming one individual I’d probably end up leaving a whole bunch of people out,” Kravitz replied when asked his outstanding players. “They were all remarkable and it was a really great time for me.”

Parrott’s athletic excellence the past few years has made it a coaching hotbed.  The football team finished runner-up to Rocky Mount Academy in the 8-Man Football state championship.  The Patriots were coached by first-year head man, Matt Beaman, who is also the school’s athletic director; and his softball team also won a state championship this spring.

Also this past spring the Pats won the NC Independent Schools Athletic Association 2A state baseball championship coached by the legendary George Whitfield.

Whitfield is the former East Carolina star of the fifties, coach at Goldsboro and Richmond County high schools, an ex-assistant at Mt.Olive, Ole Miss, and ECU, and resident within nine separate Halls-of-Fame statewide.

The Patriots’ basketball coach is Wells Gulledge, who returns to the sidelines after two years away; but who coached Kinston High School to three straight state basketball championships.  Gulledge left coaching because he had a young family with two pre-schoolers.  That’s something Kravitz, with a one-year old daughter, Taryn, at home, can relate to.  Part of the enticement for Kravitz was that Parrott has also offered Taryn a chance to enter the prestigious school tuition-free when she comes of age

One thing Kravitz will have is a shorter commute to work. For 11 years he made the hour-and-20 minute drive from his Greenville home to Merry Hill during the school year.

“Leaving was a family decision,” Kravitz remarked.  He recently added a one-year-old daughter to his family.  “But I also consider the parents, faculty, and students at Lawrence as part of my family also.”

Fans will still see Kravitz on the football sidelines come fall.  The Patriots are set to play the Warriors in Merry Hill for the 2015 season.

“I hope we can definitely get Lawrence on the baseball schedule in the future, if not next year,” Kravitz said. “It’ll be strange looking across the field at kids you’ve coached before, but it’ll still be a joy to watch them develop.”