PEMBROKE – Former Lawrence Academy baseball player Chad Whitehead, who spent the last five seasons with UNC-Pembroke, closed out an outstanding college career as a student-athlete for the Braves with several top achievements.

The Windsor native was one of seven UNCP players named to the All-Peach Belt Conference baseball team in May at the league’s annual awards banquet in Columbus, GA.  Whitehead was named second team starting catcher while his teammate, infielder Collins Cuthrell, was named Player of the Year after leading the PBC in 10 statistical categories. 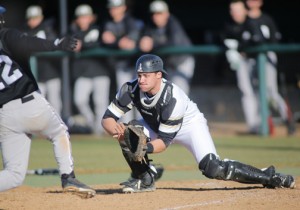 Chad Whitehead, who played prep baseball at Lawrence Academy and college ball at UNC-Pembroke, received several honors prior to his May graduation. Photo Courtesy of UNC-Pembroke

Whitehead, a fifth-year senior following a medical redshirt his freshman year, enjoyed a banner season that saw him post career highs across the board while starting 43 games behind the plate. Whitehead posted a .346 batting average to go along with 16 extra-base hits, including the first four home runs of his collegiate career. In addition to driving in 42 runs and crossing the plate 38 times, he also turned in 20 multiple-hit and nine multiple-RBI contests, and compiled an impressive .984 fielding percentage.

The Braves were ranked as high as 11th in NCAA Division-II and closed out the year with a record of 38-13 in the PBC Baseball Tournament in Columbus.

During the tournament, where the Braves went 1-1 before being eliminated in the semi-finals by Armstrong State of Savannah, GA, Chad hit .500 (4-for-8) with two RBI and a run scored. He was 2-for-4 in both games, and doubled in a run in the semifinal loss to the Pirates. He also scored a run in the opening round win over Columbus State.

Whitehead followed up that kudos by being one of six UNCP seniors who earned a spot on the National Collegiate Baseball Writers Association (NCBWA) All-Southeast Region Team, when he was named Honorable Mention as a catcher.

A two-time All-Tarheel Independent Conference and All-State selection at Lawrence Academy for Coach Robert Kravitz, Whitehead helped the Warriors to two of their seven consecutive state championships after registering a .455 batting average with seven home runs and 40 RBI as a senior. He also posted a 6-1 record and a 1.20 ERA on the mound. Whitehead also played basketball for the Warriors.

A Sports Physiology major with a minor in Business Management, Chad graduated from UNCP in May.  He is the son of Neenie and Charles Whitehead of Windsor.  Chad’s grandfather, Burgess “Whitey” Whitehead, is a former major leaguer with the Cardinals, Giants and Pirates. “Whitey” Whitehead was also a member of the St. Louis Cardinals “Gashouse Gang” that won the 1934 World Series.