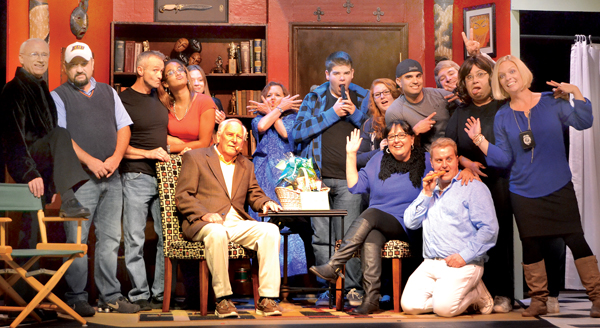 AHOSKIE – Before we begin the now and the tomorrow, homage needs to be paid to a great year gone by for the Gallery Theatre.

The recently completed 49th season’s shows and adventures were evident right out of the gate with a September “Womanless Beauty Pageant, or also known as the Miss Heritage Day Queen Contest”. Some of the most unlikely men from around the county blended together to create a quite unforgettable night for the 400 plus attendees who were either pleasantly shocked or rolling with laughter.

The “Young, the Bold and the Murdered” kicked off the official season for the Gallery, a slower paced “who dunnit” comedy with a great cast who entertained the audience and kept the play balanced nicely.

Next up, and highly talked about though the area and social media, was SPAMALOT! – a musical spin off of the cult classic comedy “Monty Python and the Holy Grail.” This vast undertaking took a cast and crew of over 40 people and full time hours to bring to the stage one of the most successful productions seen in a while from the Theatre. Successful in this context, by quality and outstanding performance SPAMALOT was an achievement for all of us who love the theatre and all it has done and continues to do for our community. 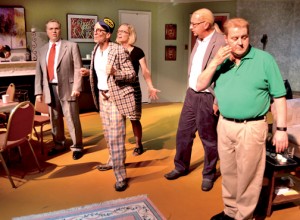 Performances in the “Nerd” were turned in by, from left, Russell Boyd, Tim Flanagan, Michelle Newsome, Tony Jenkins, and Tommy Hurdle. Photo by Teresa Flanagan

Last up was the “Nerd” – a superfast paced “who’s on first” type of hilarious comedy. A very talented cast made up of Tommy Hurdle (Willum), Michelle Newsome (Tansy), Tony Jenkins (Axel), Megan Somers (Clelia), Russell Boyd (Warrnock), Brycen Newsome (Thor) and Tim Flanagan as the Nerd brought it to life. The chemistry between these fine local actors and actresses was more than out in abundance. “Nerd” was directed by Ralph Hewitt; sound by Bobby Hoggard; and lighting by Jill Gadsden.

So ends the 2014 Season of the Gallery Theatre. Don’t be dismayed though as the 49th Summer Youth Theatre Workshop is starting June 22 through July 18 with on-site registration June 17-19. This summer is “Annie” Jr with show performances on July 17 and 18 at 7 p.m. Ticket prices for “Annie Jr” is an affordable $13 for adults, $11 for seniors, and $9 for students.

Annie Jr and the workshop will be under the direction of experienced theatre board member Jill Gadsden with Hope Miller and Michelle Newsome assisting. The cost of only $50 for the first child and only $35 for each additional kid affords your child or children the experience of show business. They learn what it takes to put on such a production; they find confidence in themselves, and overcome personal hang-ups such as shyness and self-esteem. Maybe they will get a chance to feel like a star for a brief moment in their lives. Get them signed up today while space is available. If interested, go to “The Gallery Theatre’s” Facebook page or call (252) 332-2976.

What are they going to do next you might ask yourself…. well you are going to be pleasantly surprised. September 19 marks the 50th Anniversary Gala for the Gallery Theatre! With a fresh committee picked to spearhead bringing this huge event to fruition, the Theatre plans a complete tribute down Gallery Memory Lane from the beginning through the decades until now. It is a journey of music and memory through the six decades of the Gallery Theatre. There will be slides, spoken memory and music from the shows performed over the past 50 years

The Gallery Theatre’s 50th Anniversary Gala is a semi-formal celebration featuring entertainment from the past 50 years of performances at the Gallery as well as silent auctions and other fundraising opportunities. There will be memorabilia on display and Gallery veterans on hand to answer questions and share stories. So if you are going to treat yourself to a memorable upscale event, this is it! A musical memorial to one of the longest lasting playhouses in the state, with all your favorite actors and actresses on hand and plenty of memories for all ages.

What does the future contain for the Gallery? Well in the theme of 2014’s season, the 2015 season looks like it will be another challenging and amazing season coming up starting with the British comedy “You got Served” directed by stage veteran Norman Askew. Next up is the classic drama “Steel Magnolias” directed by theatre favorite Hope Miller. To end the season with a bang along comes the outrageous musical “Rock of Ages” directed by SPAMALOT Director Tommy Hurdle.

2015 will serve as another step into the future for the team behind the Gallery Theatres latest success. Don’t let next season pass you by and get your season tickets today!