That’s not the case for Anastacia Drake. The 27-year-old Bertie County native was diagnosed with the disease at age 21. Over the years, her condition has slowly but surely deteriorated. As the disease has worsened, her lungs have become severely damaged. She now desperately needs a double lung transplant. 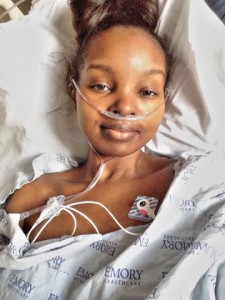 Anastacia Drake has been diagnosed with Sarcoidosis and is in need of a double lung transplant. Several fundraisers have been planned this summer to help generate money she needs for the transplant not covered by her insurance. Contributed Photo

Drake has been on oxygen 24 hours a day since earlier this year. She has weekly rehabilitation sessions in Greenville that include walking and breathing exercises to help prepare her for the possible surgery. In spite of her troubles, she remains optimistic and makes the best of the bad situation she is in.

$10,000 is needed to cover all of Drake’s medical, travel, and relocation expenses that her insurance will not cover. Having begun raising money about three months ago, she has raised almost $7,000, but is still about $3,000 short.

After learning of her condition, Kayla Wolverton, a recent graduate of Hertford County Early College High School and friend of Drake, has devoted her summer to help raise money for her.

“This is what I want to spend my summer doing; this is how I’m going to give back.” Wolverton enthused. “I knew if I got enough people together, and you know, really pushed it, we would be able to raise money for her. If 1,000 people each donated $3, she would be ready to receive her new lungs.” Wolverton says earnestly.

Golden Skillet will have a car wash in the coming weeks to raise money. They also plan to sell dinners to help fund the surgery.

“How she gets to her goal isn’t what matters; it’s that she reaches it. She’s changed my life with her grace and I want to change her life with hope,” said Wolverton with a smile.

Those who want to donate money can visit to Anastacia’s GoFundMe page (HopeForAnastacia) or at the State Employee’s Credit Union under the Anastacia Drake Lung Account.

Sarcoidosis is an inflammatory autoimmune disease that can affect any organ in the body. The disease causes masses of inflammatory tissue to form in certain organs. Masses can affect normal structure and function of these organs. It usually affects the lungs, eyes or liver. Roughly four out of 10,000 in the United States have the disease. Most people diagnosed with the disease enter remission within three years of diagnosis. Organ damage occurs in about one-third of the people diagnosed. With extreme organ damage, death is possible if a transplant is not received soon.