GATESVILLE – They’re not only Sunbury neighbors; they’ve shared a lot of life together since they were small.

From Pee-Wee Football through Gates County High School, Andrew Wiggins and Nick Herman have often been together on the football field.  Wiggins was the slick, quick scrambler while Herman is the one who led his blocking corps.

Small wonder then that both picked the same day and same occasion to sign their college Letters-of-Intent: Wiggins with Lenoir-Rhyne University and Herman with the Newport News Apprentice School. The signing took place at the Gates County Board of Education office.

You know teammates are close when they can finish each other’s sentences.

“Our record when we first began playing together,” Wiggins begins.

“Champs,” says Herman with emphasis, as a room of family and friends erupt in laughter.

Though Gates was just 23-24 during the pair’s four years on the gridiron, both players made huge contributions to the program.

“Both of these guys are going to go in there and work hard,” said Red Barons head football coach Matt Biggy, “I have no doubt about that.  Nick can block, he can be a long-snapper on kicks, play the offensive line, and he has what a lot of colleges are looking for; so he’ll really be able to help that program.  Drew’s biggest attribute will be his versatility at the skill position, whether it’s defensive back, quarterback, linebacker, receiver, whatever; he can do a lot of things for them.”

A four-year varsity player, Wiggins started 49 consecutive games at quarterback for the Red Barons, and 18 games at safety.  During his senior season in 2014 he threw for 749 yards, 14 touchdowns and made two key interceptions playing in the secondary; two times he was a Coastal-10 All- Conference selection.

Herman started 34 games, including all 34 at center, and 22 at defensive tackle.  He graded out at 94 percent on blocking assignments his senior year, and was named First Team All- Conference.  Defensive statistics for 2014 season for Herman include: 47 total tackles, 14 tackles for loss, 6 sacks, two forced fumbles and one blocked point-after-touchdown.

“I like it (ApprenticeSchool) because it’ll be good work, good money, and I get to play football,” Herman said. “The routine won’t bother me because I get up every day and work on the farm and then go to football practice.”

Herman, who also drew attention from NC State and East Carolina, said he plans to take up welding as one of the trades offered at NNAS.

“I plan to give it a lot of hard work and dedication,” he said. “I know I need to work to get better if I want to get some playing time.”

While he has yet to play one down of college football, he already has a mindset for his next level of the sport, should it come to that.

“If I get that far (the NFL), I’m going all the way,” he says with steely resolve.

Wiggins has been signed as a quarterback-athlete which leaves him with quite a few college football options. In college he plans to major in mechanical engineering, even though Lenoir-Rhyne does not offer that degree program.

“They told me they plan to offer it as a four-year degree and should have it in the next few years,” Wiggins said. “If not, I want to study business.”

Like Herman, Wiggins drew the attention of the Pirates and the Wolfpack, but in the end, it took just one trip to Hickory and he was sold.

“They really went the extra mile to make me feel comfortable,” Wiggins declared. “They made me feel wanted, they have a really good program and I wanted to be a part of it.”

Like Herman, Wiggins would like to play this fall, but he knows there’s a big difference between college football and high school.

“I think I’m going to have to beat somebody out,” he says with a sly smile. “I’d really rather play offense, but I’ll do whatever they say.”

Wiggins lists Pittsburgh Steelers receiver Antonio Brown as the pro player he most admires because of his small stature and his explosive game.

The parents of both players attended the signing and are glad their sons are taking the term ‘student-athlete’ seriously.

“Whether it was sleep-over’s, birthday parties, they knew each other very well,” said mom, Leslie Wiggins.  “If neither one of them never played another minute of the game, it would be okay because football’s important but it’s not everything.”

It may be a stretch, but both players were asked the prospects of facing each other across the line of scrimmage one day after being in tandem for so long behind it.

“I hope the guys who play in front of me are as good as he was,” started Wiggins. 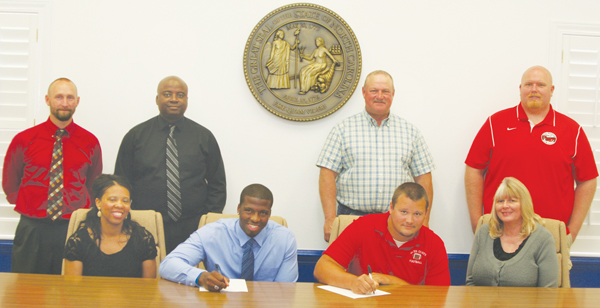