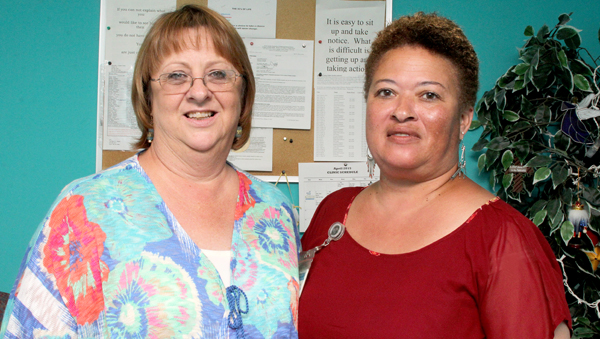 AHOSKIE – It’s not often that a husband and wife are in the same line of work, but yet with different occupations.

That rule does apply to Diane and Willie McLawhorn…he’s a minister; she’s a nurse, meaning both are experts when it comes to saving lives – spiritually and physically.

As of Monday, June 1, Diane McLawhorn will retire as Nursing Director with the Hertford County Public Health Authority (HCPHA). However, don’t expect her to ever stop being a nurse, a healer, and, more importantly, a counselor.

Typically, a child will follow their parents into the same line of work. That wasn’t the case for McLawhorn as none of her family members worked in the medical field.

“Nursing became my passion, perhaps more so after my children were born because part of a mother’s job is being a nurse,” she said. “With Willie’s work as a minister, I needed a regular job with somewhat normal hours due to raising a family. What I didn’t want was a job with shift work.”

However, being a “working mom” – and now an adoptive grandmother – does consume much of her waking hours.

She said the transition was an easy one from working as a hospital nurse to the field of public health.

“In public health nursing you work with your clients over a longer period of time; so you get to know more about them and their families,” she noted. “If you stay long enough, you’ll see a baby that you provided care for grow up and become an adult, and you’re still seeing that adult as a patient as they age through our various programs.

The latter comes into play when public health officials place a patient in one of the many programs offered.

“Say you’re talking to a mom who has just given birth; not only does the discussion center around the mother’s health and the health needs of the baby, but you also ask if the home they’re living in has electricity and a refrigerator to keep the baby’s formula in. You look at the total environment they’re coming out of and how that affects the household. I absolutely love that aspect of that type of work, that type of counseling.”

Over the years, McLawhorn completed enhanced training in an effort to screen and treat patients suffering from sexually transmitted diseases, and to perform well-check exams on children, as well as for adult health issues.

McLawhorn also enjoys her role as a supervisor.

“Public health is a very family oriented type of environment,” she stressed. “How are you going to teach and counsel your clients on the importance of spending time with children and developing relationships if you’re not doing the same thing within your own work environment,” she remarked. “I feel we have that family atmosphere here at Hertford County Public Health Authority. I’ve truly been blessed by the people I’ve worked with at all three health departments I’ve been employed at over the years.”

McLawhorn needed that work support when she lost her son, killed in the line of duty in 2011 while a member of the U.S. Army serving in Afghanistan.

“Your co-workers are an extension of your family,” she said. “I never had to worry about how much time I had to take off when Will died. I had all kind of support from the staff here during that time. They shared in our loss.”

As far as changes in the world of medicine during her career, McLawhorn looked beyond the obvious advances in the treatment of diseases.

“The biggest change to me is the influence of politics in the delivery of healthcare and how much is governed by that,” she observed. “That’s been one of the things I’ve struggled with the most. I never thought as a bright eyed young nurse that I would have to fight to provide healthcare and do good things for people. But over the years I’ve had to fight for that.”

McLawhorn said she sees public health as an enigma, saying, “It’s done in such a quiet way and never in the spotlight until something major happens, such as the outbreak of a disease or a terrorist type impact. We spend a lot of resources and time preparing for what if.”

Others changes come by way of budget cuts, which impacts the delivery of public health services.

“We just don’t have the bodies (employees) we had 15 years ago,” she remarked.

As a veteran in medicine, McLawhorn could not pass up the opportunity to address how people can better take care of themselves.

“It’s all about choices that you make in life that affect so many parts of your life, inclusive of your health,” she stressed. “There are consequences for your actions and so many times we don’t seem to come to grips with that until we’re slammed in the face with a doctor’s diagnosis.”

As far as to what retirement holds, McLawhorn (both husband and wife….Rev. Willie is now only working as an interim pastor at Menola Baptist Church) said traveling is at the top of her list.

“We didn’t have too much time for that, with my job and when Willie was full time as a pastor,” she smiled. “Now we want to travel.”

Diane also loves, as she says, “piddling in my yard with the flowers, so that’s another thing to occupy my time. Plus I have some antiques that I want to finish restoring. Maybe retirement will motivate me to get started on that project.”

She also takes care of her 86-year-old mother, who lives with her in Conway.

“Her health isn’t the best in the world, so, once a nurse, always a nurse,” she chuckled. “I don’t think I’ll ever stop being a nurse; I’m going to keep my nursing license active. But the biggest thing I’m looking forward to is not having to juggle all those things around having a real job. One thing that I learned after Will’s death is that I needed to do a better job of making time to spend with family and not being caught up in all the things around you. I’m looking forward to spending some quality time with family.

Diane Barnes McLawhorn is a native of Bertie County (Roxobel). She is a 1976 graduate of Bertie High School. Two weeks after earning that diploma she married Willie McLawhorn, also a native of Roxobel. That fall they both enrolled at Gardner Webb University, from where Diane earned an Associate’s degree in Nursing while Willie obtained a degree in Divinity.

“He hung around an extra year (at Gardner Webb) waiting for me to finish my nursing degree (which she earned in 1979),” Diane recalled.

The McLawhorns moved back to the Roanoke-Chowan area in 1980 when Willie was called to his first pastorate at Lasker Baptist Church (Northampton County). It was there that the couple gave birth to their first child, a daughter, Melody, in 1982.

Meanwhile, Diane landed a job as a nurse at Roanoke-Chowan Hospital.

“After Melody was born, I went to work as a staff nurse with the Northampton County Public Health Department,” she said.

In 1987, Willie was called to serve as Pastor at Western Prong Baptist Church in Whiteville. Their son, Will, was born the same year.

Diane took her medical skills to Columbus County Health Department, beginning as a staff nurse and working her way up to a supervisor’s position in Adult Health Services.

Ten years later (1997), the McLawhorn family came home again when Willie accepted the pastorate at Conway Baptist Church. Diane got her old job back with Northampton Public Health, but left in 1999 for a job as Nursing Clinical Supervisor with HCPHA. Her vast skills also helped the organization maintain its balance on two occasions when they were without a Health Director. She twice served as Co-Interim Health Director (Aug. 2008 – May 2012; and Oct. 2013 – March 2015) while still maintaining her normal duties as Nursing Director.