AHOSKIE – It’s thought of as a ‘holiday’; but for those who’ve seen and had loved one in harm’s way, and experienced the sacrifice for the sake of freedom, it’s a holy day.

On Monday, as a nation celebrated the men and women who have sacrificed life and limb at home and abroad, many took the time to show gratitude for that sacrifice, in wounding and in death. 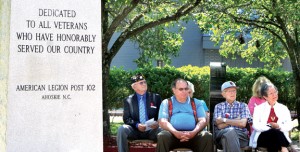 A few of those attending Monday’s tribute in Ahoskie are seated near the memorial monument erected in honor of military veterans at Ahoskie’s No Man’s Land Park. Staff Photo by Gene Motley

As they’ve done in prior years, Hertford County American Legion Post 102 held their special “Memorial Day at No Man’s Land” at the little park located on the corner of Main and Railroad streets in Ahoskie with a service that honors fallen service men and women.

“There’re a lot of veterans here, but this is not our day today,” Hutchinson intoned. “We’ll have a day (Veteran’s Day: Nov. 11) later on.  But let’s always teach our children the difference between the days, so those who need to be honored on that day will be.”

Robin Bland of the Post Auxiliary then offered a stirring rendition of the National Anthem before Hutchinson introduced the speaker for this year’s service: Rev. Daniel Smith, pastor of the Ahoskie Christian Center, and himself a U.S. Navy veteran of the Vietnam Conflict.

“I thank God every day that I’m here and I have the privilege of sharing with you today, because I could have been gone as well,” Smith began.

The speaker then gave a brief history of Memorial Day; it’s beginnings following the American Civil War, honored by the former Union states beginning in 1873 and final recognition by all states following World War I.

“The holiday changed from honoring those who fought in the Civil War to honoring all Americans who fought in any of our wars,” Smith said. “And the best way to honor those who died fighting our wars is to frequently remember what they died for. The precious freedoms we enjoy and share today were brought with the blood and the breath of those who died in our wars and we need to be aware of that.” 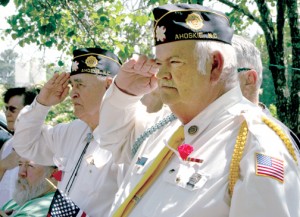 Smith then reviewed the Bill of Rights, the first ten amendments to the U.S. Constitution; dealing with safeguards of liberty and justice, as well as enumerated rights and reserve powers.

“I’m not even sure if they’re being taught in school today,” Smith remarked, “but they need to be and should be because they should never be forgotten.  Don’t let the memory of why they died fade away.”

“Amendments 5, 6, 7, and 8 are all concerned with equal justice for those accused of a crime,” he continued. “Our nation places great importance on these rights in order to guarantee equal justice for all Americans.”

Smith also gave a history lesson on the Ninth Amendment on rights not mentioned in the Constitution.

“The freedom to travel, to work, to raise a family, to receive a free public education, to join a political party, and the guarantee of states’ rights,” he related.

“As we continue to celebrate Memorial Day here today, let us ever be so minded of the tremendous price that has been paid for these precious rights and freedoms we enjoy,” he concluded. “Let us remember them by doing everything we can to maintain these freedoms.  We must memorize, we must meditate, and we must pass on to our children what these freedoms are and why they are so precious to us.”

Following the speaker’s remarks Commander Hutchinson gave honor to the veterans who have transitioned on to “Post Everlasting for Post 102”: Raymond Broadhead, Franklin T. “Buddy” Byrum, John B. Mizzelle, and Roosevelt Askew.

“Those are men we know and veterans of this post who have passed away this year,” the Commander said.

Hutchinson then asked those assembled to shake the hands of the veterans who gathered for the service.

“Tell them how much you appreciate what they did because any one of these veterans who are here today could have been one of the ones who fell during the wars,” Hutchinson said. “Talk to them and thank them for their service.”

The flagpole at No Man’s Land was at half-staff for the service, but was raised to full height at high-noon.

“Every time you see a flag this morning, or anywhere today, think about those men and women who gave us those freedoms our speaker talked to us about,” Hutchinson reminded them.

The service closed with the eulogy ballad, “Go Rest High On That Mountain”, sung by Commander Hutchinson.  Chaplain Kiker then gave a closing prayer and a recorded trumpet version of ‘Taps’ was played before adjournment.

Forest tent caterpillars on the move